Listicles are always fun to read, and they’re fun to make too! In keeping with our “5 of the most…” Series I’ve decided to write up a list of the most magical objects in our collection. But there’s a problem…. magic is kind of a vague term. I mean, are we talking about turning a pumpkin into a carriage here? Or are we talking about religion?

Well, religion itself isn’t magic. Dictionary.com defines magic as “the art of producing a desired effect or result through the use of incantation or various other techniques that presumably assure human control of supernatural agencies or the forces of nature“. So magic is the manipulation of things or events through the use of objects or words that give the individual power over these things. There are actually relatively few objects in our collection that can be described as “magical”. There’s lots of symbolic stuff, things that evoke deities, but not things that can give power to an individual to bend objects or events to their will.

Over the next few weeks we will discuss some of the magical items in our collection. Since these items tend to be rooted in ancient mythology and thus require a lot of back story and explanation, they will be presented in a count-down form. I’m afraid the fast-pace and simplicity of the listicle format can’t handle all this magic. So, without further adieu, let’s start the countdown!

5. Ancient Egyptian coffin panel containing incantations from the Book of the Dead 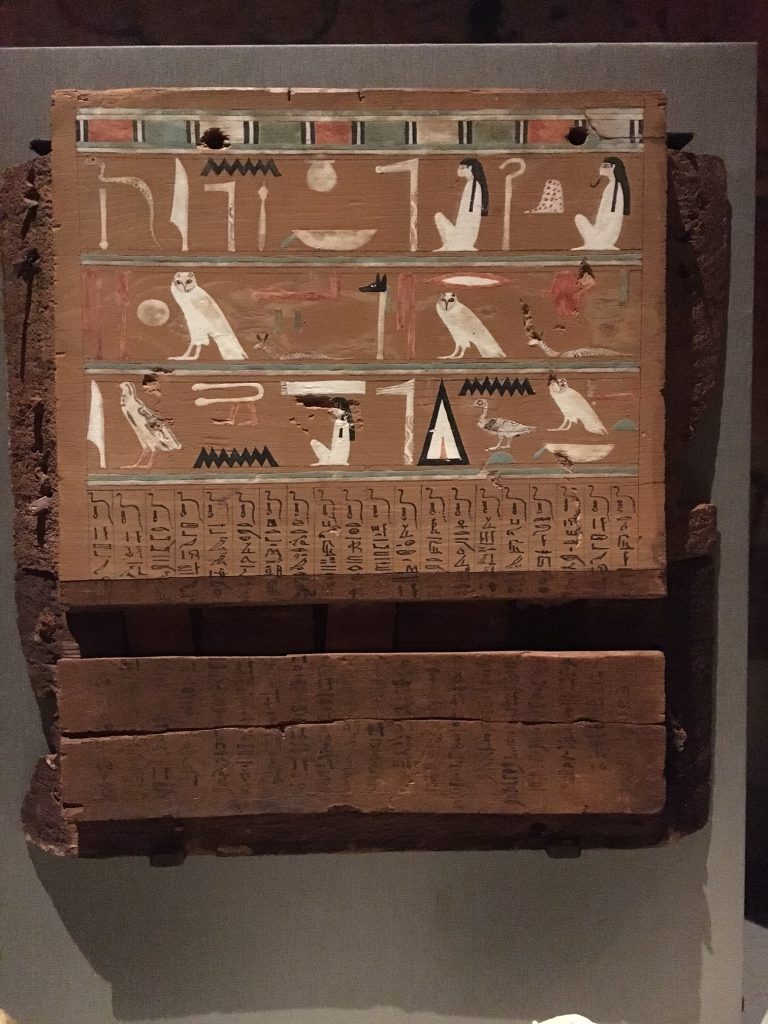 Above is an image of the inside of a panel from the Middle Kingdom-era coffin of Satmeket. Painted on its surface are various incantations ensuring the safe journey of the deceased’s spirit through the afterlife.

When most people think of the ancient Egyptian Book of the Dead they imagine some crazy stone, or perhaps golden book containing secret spells that can bring you girlfriend back to life or something. But in reality the Book of the Dead was more like a cheat sheet. The afterlife is a strange place and most mortals aren’t well acquainted with the proper etiquette and procedure when dealing with supernatural beings such a gods and sometimes demons. Luckily for ancient Egyptians, this knowledge could be purchased from scribes in the form of documents detailing necessary information about the journey.

Ancient Egyptian civilization was around for a long time, so naturally knowledge of and beliefs about the gods changed a lot between different periods. The term “Book of the Dead” was coined in the nineteenth century, in reality there is no single work acting as a sort of Egyptian bible but rather hundreds of documents with varying information written by scribes—usually tailored to the specific spiritual needs of their clients— that have been collected by archaeologists over the years. Despite the variety of content, there are certain spells that were pretty universal. One spell that did find its way into most Books of the Dead was spell 125, which dealt with the judgement of the heart of the deceased. 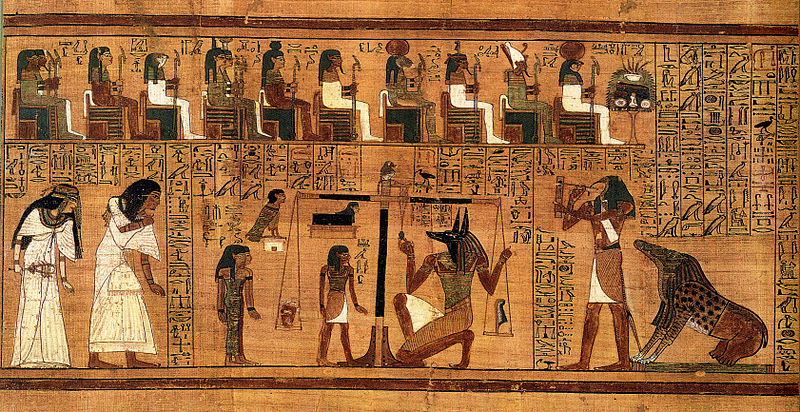 The Weighing of the Heart from the Book of the Dead of Ani. At left, Ani and his wife Tutu enter the assemblage of gods. At center, Anubis weighs Ani’s heart against the feather of Maat, observed by the goddesses Renenutet and Meshkenet, the god Shay, and Ani’s own ba. At right, the monster Ammut, who will devour Ani’s soul if he is unworthy, awaits the verdict, while the god Thoth prepares to record it. At top are gods acting as judges: Hu and Sia, Hathor, Horus, Isis and Nephthys, Nut, Geb, Tefnut, Shu, Atum, and Ra-Horakhty. Source: Wikimedia Commons. Author: Photographed by the British Museum; original artist unknown

Our panel contains a small part of that spell. It was believed that before having their heart weighed (light heart = virtuous person), the deceased would be questioned by 42 supernatural beings. It was extremely important to know not only the answers to the questions, but the correct form of address to the beings. You’ll notice that each line atop the vertical registers on the bottom half of our coffin panel begins with two symbols: a snake and what looks like a vase. Those symbols translate to: djed medu, or “words to be spoken”. These are the answers to the questions the beings will ask, as well as the proper form of address. 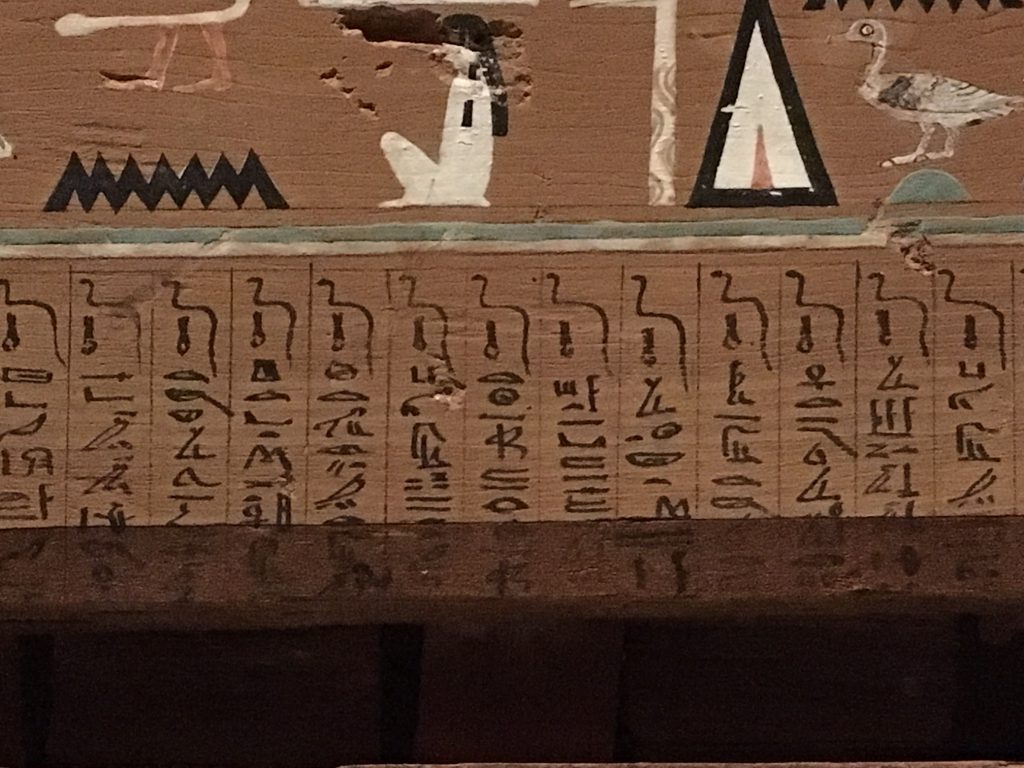 Detail of our coffin panel, showing the words “djed medu” at the top of each line.

So as far as magic goes, this is a pretty powerful piece. It contains secret knowledge designed to ensure a safe journey to the afterlife, something not guaranteed to most ancient Egyptians. In fact, before the New Kingdom (c. 1550 BC – 1077 BC, i.e. a thousand years after the pyramids were built) only the Pharaohs and a few other elites were allowed access to this knowledge!

Want to gain more secret esoteric knowledge? Be sure to check out our Hall of Ancient Egypt, where every single item has a fascinating story behind it!

Previous Post
My Favorite Part About Camp!
Next Post
Great News For Fans Of Sea Scorpions: We Have A New One And It's Giant! The image above shows a carved granite slab on display in our Hall of Ancient Egypt. It depicts Rameses II running a symbolic race during one of his Heb-Sed festivals. He carries a water jug over his shoulder possibly representing the burden of his rule. But what is all this for? Some readers of this […] For thousands of years people have sought to distinguish their place in society through wearing or owning rare and exotic materials. Depending on where you were from, these materials may vary. 500 years ago in the Midwestern United States, the tribal societies of the Mississippian Culture constructed jewelry and elaborate ceremonial objects from marine shells. […]