For thousands of years people have sought to distinguish their place in society through wearing or owning rare and exotic materials. Depending on where you were from, these materials may vary. 500 years ago in the Midwestern United States, the tribal societies of the Mississippian Culture constructed jewelry and elaborate ceremonial objects from marine shells. In South America, beautiful macaw feathers were used in clothing and elaborate head dresses. Every ancient culture placed value on things that most people would consider strange today, but likewise many ancient cultures used some of the same gemstones are that are popular in modern jewelry today.

One question that many people don’t think to ask when they look at the magnificent carved stone specimens in our Hall of the Americas or Hall of Ancient Egypt is: “how did they shape those stones?”. It’s a good question, when you think about it. The ancient Maya, the Aztec and the Inca possessed stone tools. The ancient Egyptians only had copper and bronze. How did they cut through stone? Well, some of it was just really hard work, basically rubbing two stones together, one much harder than the other, to shape and polish the softer stone. Stone and copper chisels were also used, an equally tedious process considering that the chisels were often made of rock softer than the material you were carving. But at least part of the process of cutting stone has been automated for thousands of years, and this article will talk about the tools that made this possible. We actually have ancient power tools that were used to cut holes in rocks and precious stones thousands of years ago! 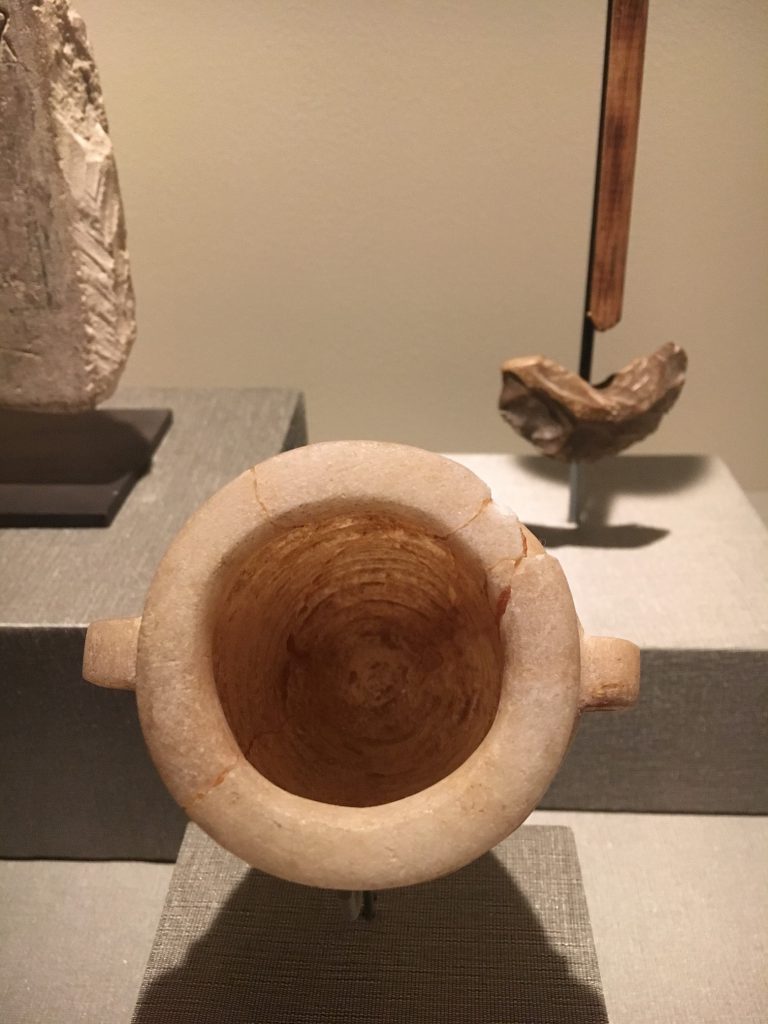 Interior of a carved alabaster jar, showing drill marks in the interior from when it was hollowed out.

Take a look at the alabaster jar pictured above. See the concentric circles carved inside? This piece started its life as a solid chunk of alabaster. Its exterior was carefully and meticulously hand carved with stone, or maybe copper, tools and then its interior was efficiently drilled out with a bow drill. Bow drills are an ancient technology, with roots going back to the Upper Paleolithic Period in Europe and well before Columbus’ arrival in North America. Both Native Americans and Europeans used the technology until the turn of the 20th century. Native American groups commonly used the bow drill to start fires, whereas both Native Americans and Europeans used the tool for cutting and drilling through hard objects like gemstones.  We have bow drills from both hemispheres at HMNS: an ancient Egyptian bow drill and an Inuit bow drill, both pictured below. 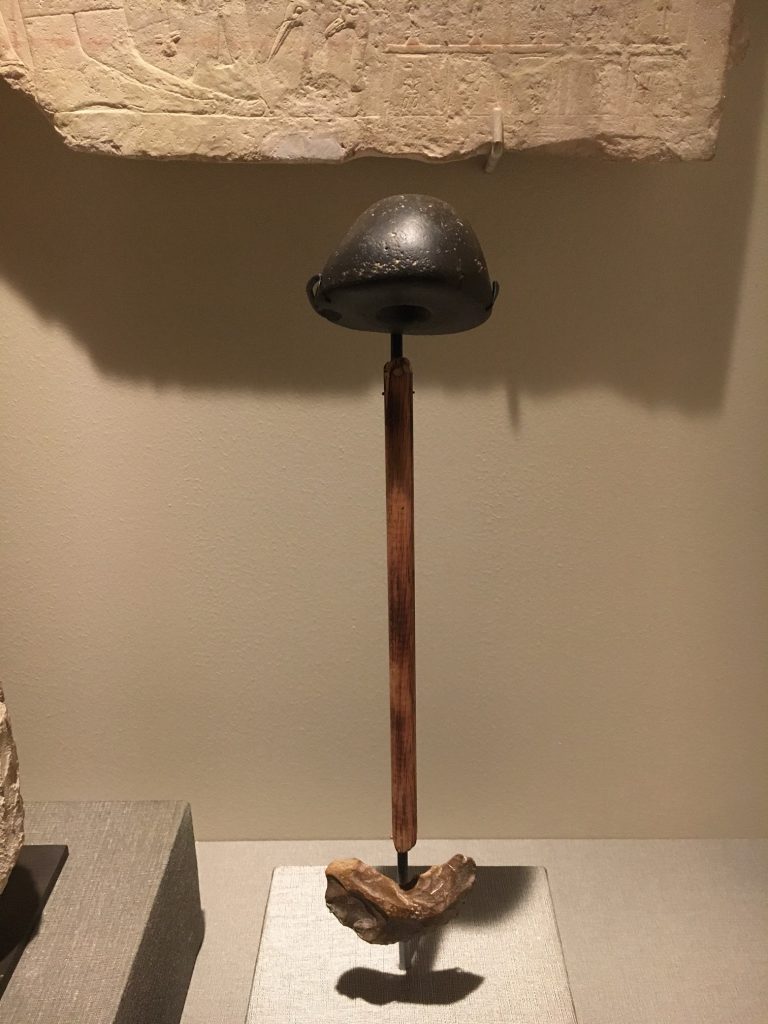 Ancient Egyptian bow drill. Bow is missing, but shaft, “bit” and stone used to hold the shaft are present. 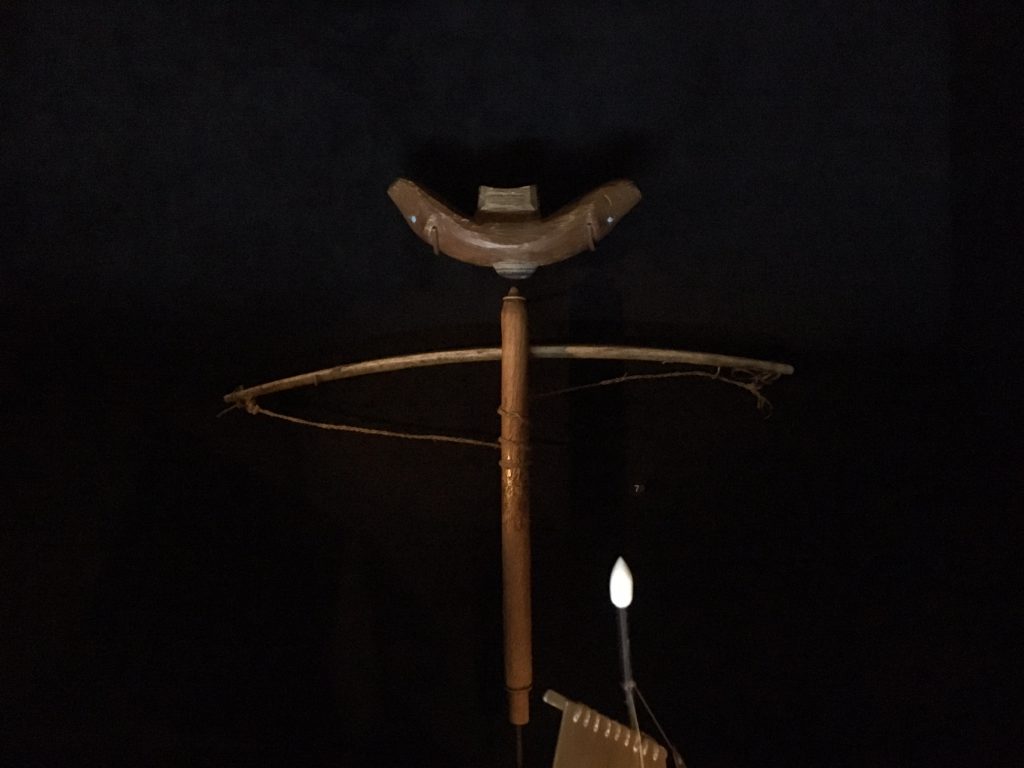 Inuit bow drill. The “U” shaped piece at the top is a mouthpiece, the artist would bite down on it to stabilize the drill while he powered the drill with one and and guided the bit with the other.

Another efficient way to cut though hard materials was the pump drill. They have existed in Europe since at least the Roman period and were introduced to the Americas sometime after Columbus. These are really cool devices. They are a lot like a bow drill, except the vertical drilling shaft goes through the horizontal wooden board. That horizontal stick is twisted around the shaft until the cordage is wrapped tightly around it. All you have to do is push the horizontal plank down and as the cord untwists itself the drill begins to turn. There is a weighted disc right above the bit, so that the shaft continues to turn even after the cord is unwound. As the shaft keeps turning, the cord is rewound in the opposite direction and the process starts over. Pump drills spin faster and are much more efficient than bow drills. 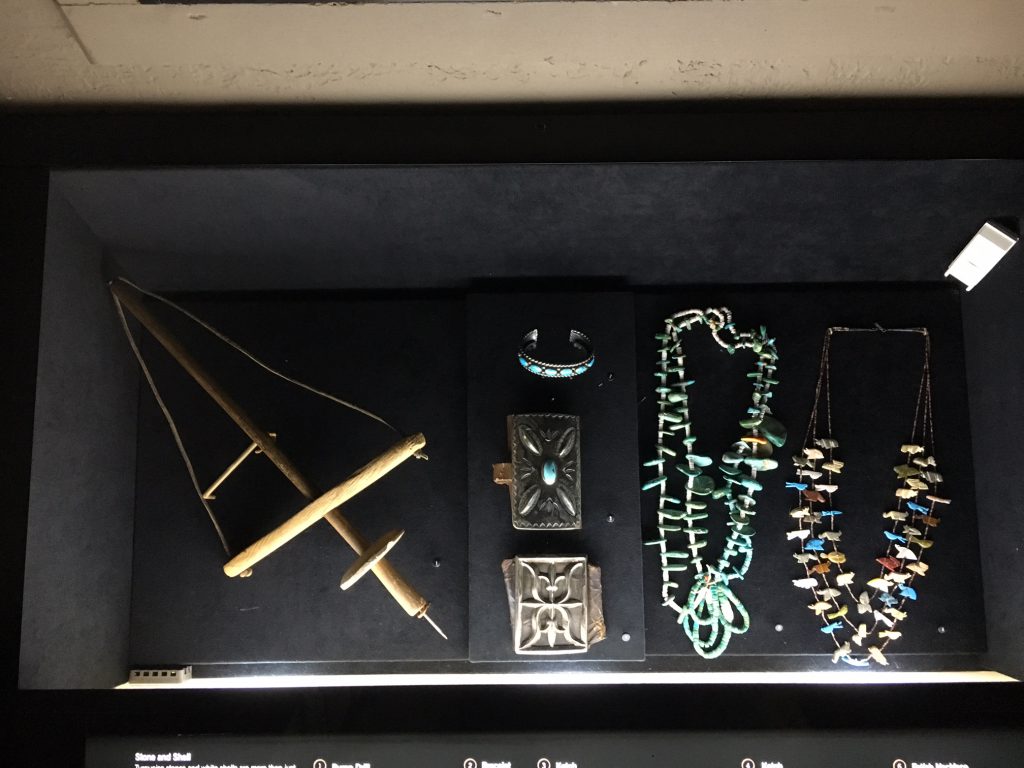 Native American pump drill alongside turquoise bead jewelry. The beads were created by drilling holes through carved and polished stones with a pump drill.

Long before electric drills and saws, gemstones were worked efficiently into beads and containers with these ancient power tools.  Admittedly the process of cutting and polishing stones is much easier now. The finer details on the exterior of the objects displayed in our Hall of Ancient Egypt and Hall of the Americas would have been worked by hand using copper or stone chisels and other stones of varying hardness to polish and shape the surface, while in our new Fabergé gallery you can watch modern gem carvers using electric tools and special diamond and sand grits to do the same job much more efficiently. But for ancient craftsmen, the small amout of automation that the powered drill provided saved a lot of time and effort, and allowed artists to express themselves in new ways. 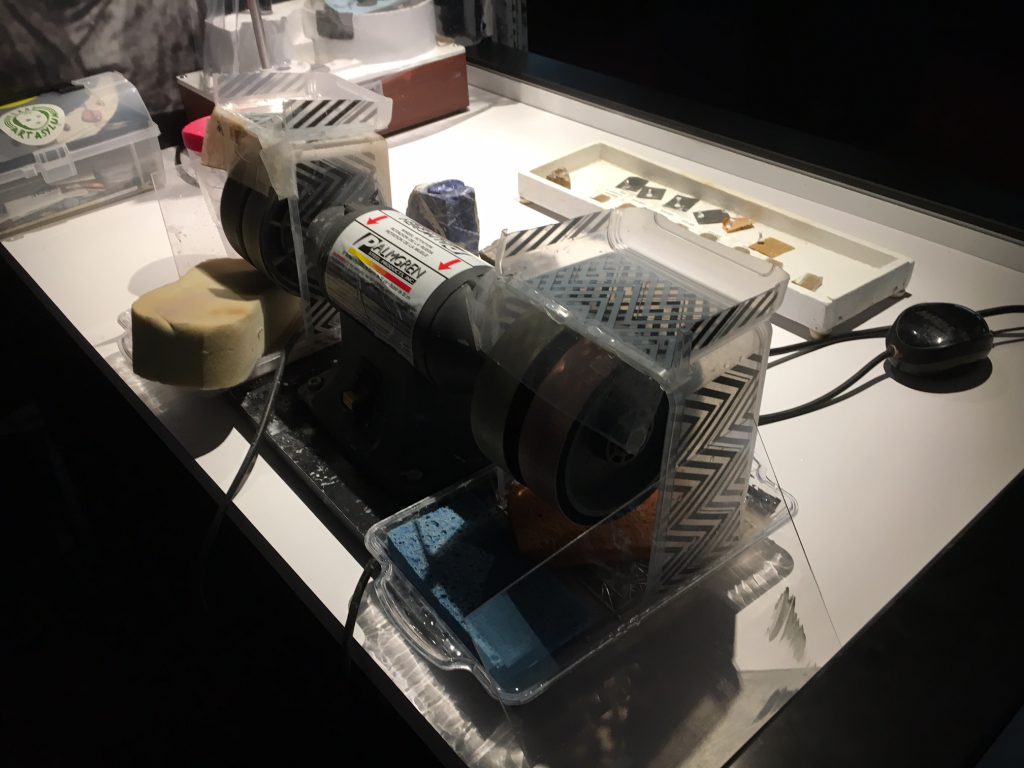 Previous Post
HMNS Weekly Happenings
Next Post
Selections From Our Collections: Who’s Ground Are You Stomping On?