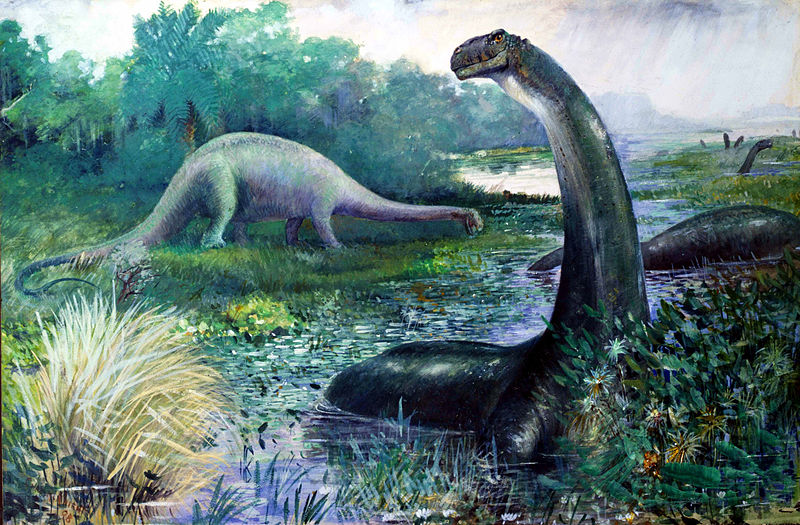 Outdated 1897 restoration by Charles R. Knight of B. excelsus submerged in water, and Diplodocus dragging its tail. Source: Wikimedia Commons.

Brontosaurus doesn’t exist. At least for now it doesn’t exist. It once did,  and it it might again soon, but not right now. I know this sounds confusing, so let me give you a little back story.

Brontosaurus has to be the second most famous dinosaur on earth, right behind T. rex. Everyone knows what a Brontosaurus is, what it looks like, what it ate. But how many people know that paleontologists debate whether Brontosaurus actually exists? Brontosaurus excelsus (meaning “Noble Thunder Lizard”) was first described by Othniel Charles Marsh in 1879, from remains unearthed in Como Bluff, Wyoming.  However, in 1903 paleontologist Elmer Riggs studied the same remains and found that they were virtually identical to Apatosaurus, a species of long-necked dinosaur that had been described by Marsh in 1877.  Riggs concluded that both specimens were the same species and that since Apatosaurus was named first, Brontosaurus should be re-labeled Apatosaurus (convention among Paleontologists is that the first name gets precedence). That was 105 years ago, but still Brontosaurus casts a long shadow over modern paleo related pop-culture. Why is this?

Well, it took a while for most Paleontologists to agree that Rigg’s theory was correct, and even longer for museums to decide to change their labels. The American Museum of Natural History didn’t relabel its specimen until well into the 90’s and by that time Brontosaurus was a star. The sauropod appeared in the first ever dinosaur cartoon Gertie The Dinosaur (1914) and the first ever stop motion dinosaur blockbuster The Lost World (1925). With its status as the most charismatic of all the dinosaurs confirmed by the success of these movies, Brontosaurus went on to star in hundreds of more films, eventually becoming a household name.

It is unsure why exactly the AMNH and Yale’s Peabody museum, who house the only mounted “Brontosaurus”skeletons,  held off relabeling their specimens for so long. Did they fear public outcry? Did they not want to loose one of their most famous mascots? Perhaps they were not entirely sold on the reclassification and feared that the species would return as soon as they finished relabeling? Probably all three of these factors contributed to the delay. By the end of the 20th century, however, whatever fears they had seem to have evaporated. I am not sure when exactly the Peabody relabeled their specimen, but the AMNH specimen was relabeled in 1995, when its mount was updated with a more accurate posture. 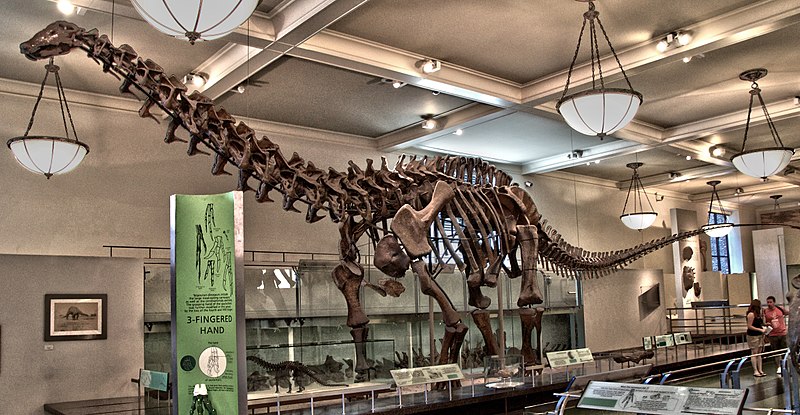 Then, just 20 years after the debate had finally been settled, a study published in 2015 suggested that the Brontosaurus skeleton originally described by Marsh is indeed distinct enough from Apatosaurus to be classified as a separate species. Not only that, but several other specimens that had previously been identified as Apatosaurs were found to belong to two distinct subspecies of Brontosaurus. So we went from zero species of Brontosaurus in 2014 to 3 in 2015. How did this happen?

Well, telling different dinosaur species apart can be a difficult task considering that all you have is the skeleton, usually incomplete. In North America many specimens of long necks belonging to the Diplodocidae family (to which both the Apatosaurs and the supposed Brontosaurs belong) have been discovered and because the bones are all big and all pretty similar paleontologists have always had hard time figuring out how to classify them into different species. The same sort of uncertainty that surrounded the Brontosaur/Apatosaur skeletons has surrounded other species as well, we just don’t hear about it as much because those dinosaurs aren’t as famous.

So to help resolve this problem and finally draw up a good family tree for the Diplodocids, Emanuel Tschopp, Octavio Mateus, and Roger Benson gathered skeletal information from 81 sauropod (aka “(long neck”) specimens. Hundreds of skeletal features were compared against one another and a computer program was used to sort the specimens into separate species depending on the number of traits they had in common. The program sorted Marsh’s original Brontosaurus, along with a few other specimens that share similar traits,  into a distinct new species. Apparently a large number of small differences, most notably a thinner neck, sets Brontosaurus skeletons apart from Apatosaurus.

So there you are. Brontosaurus used to exist and technically it doesn’t exist right now, but in the future, if other paleontologists confirm the study, it may exists once again.

Although we don’t have any proposed Brontosauruses in our collection, we do have Dipsy the Diplodocus, a cousin of Marsh’s  skeleton who was also unearthed in Wyoming. Come check her our in our Morian Hall of Paleontology!

Previous Post
Our New Science Kits Have Arrived! It's Time For Some Hands on Science Fun for the Summer!
Next Post
4 Reasons Why You Should Visit HMNS This Independence Day Holiday!