Often times the most unfortunate catastrophes can produce the finest, most well preserved specimens for scientists to uncover. Just think of Pompeii: a deadly volcanic eruption buried a Roman city in scolding ash, and in the process created a veritable time capsule for Archaeologists a millennium later to investigate. But it not just archaeologists that benefit from catastrophe, paleontologists sometimes get a little help from tragic fate as well.  Many of the specimens on display in our Hall of Paleontology have tragic stories to tell: some were buried in flash floods or landslides and others suffered even more unusual fates that ended up preserving important information for science.

Here are some examples of amazing fossils preserved under rather morbid circumstances: 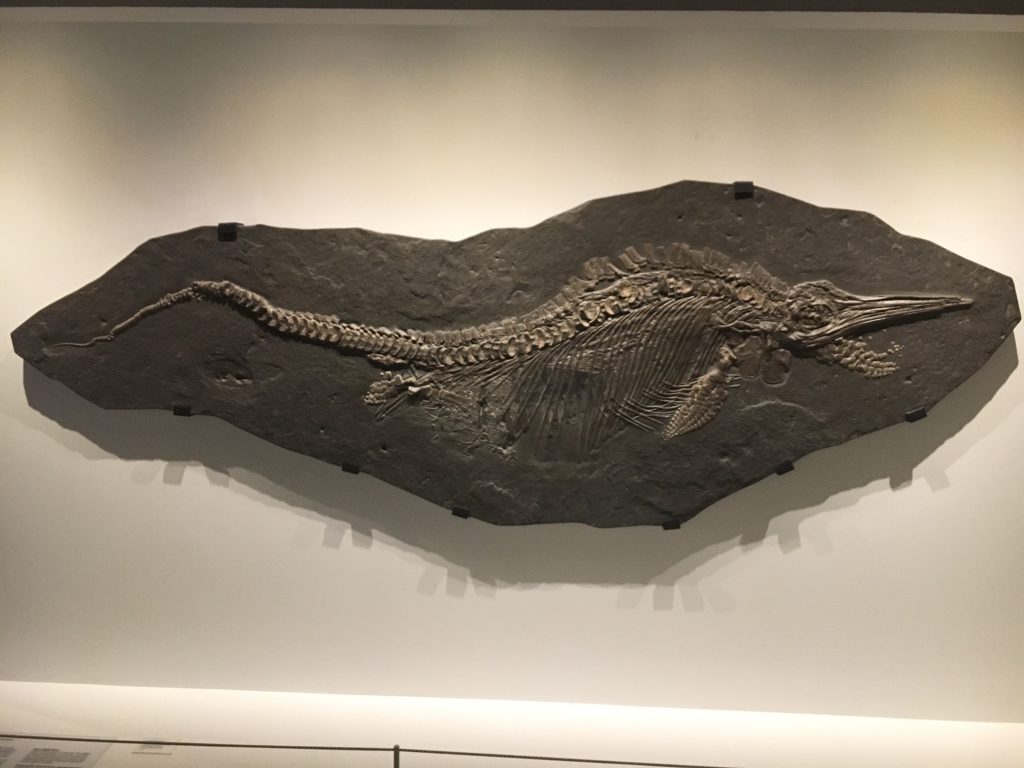 Take a look at the fossilized ichthyosaur pictured above. Beautiful, isn’t she? Most of the skeleton is intact, and even some soft tissue, like her stomach. Even the contents of her stomach are preserved: squid pins, the thin,  stiff  supportive structure of a squid’s body. But all of this, while slightly gross, is not the morbid aspect of this creature that we want to highlight. The skeletal offspring preserved inside her body are both the creepiest and most scientifically significant aspect of this fossil. 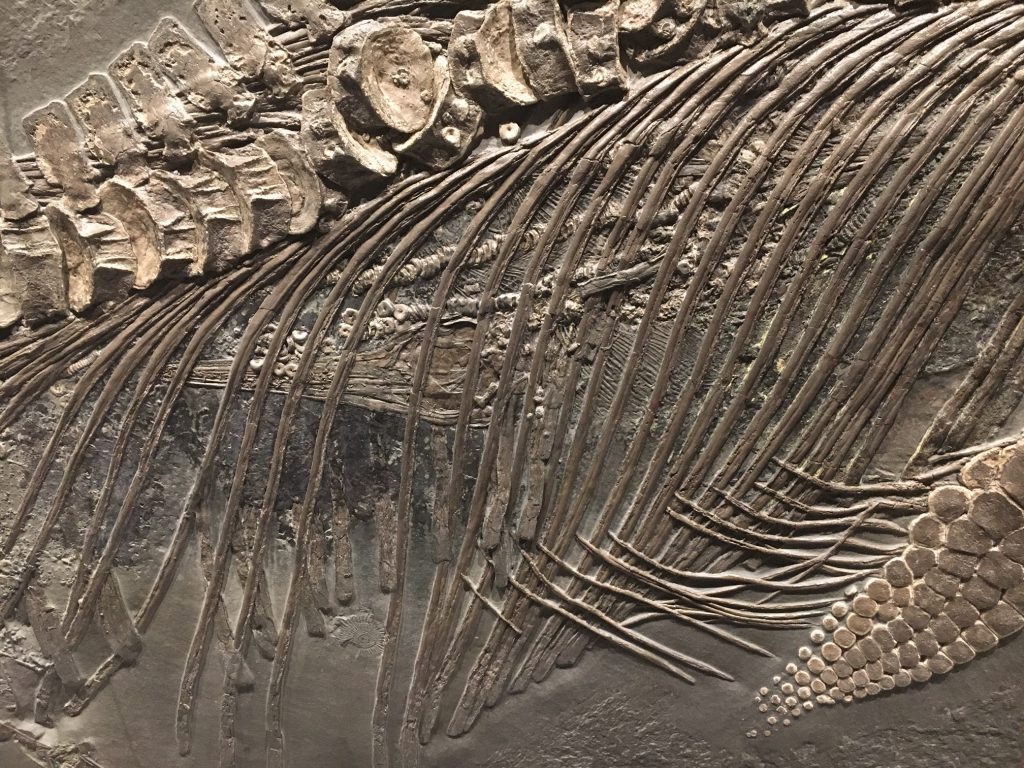 In the closeup above you can see the skull of one of her unborn offspring, along with two partially-intact vertebral columns and numerous vertebrae scattered about the torso of the skeleton. We are unsure of the number of baby ichtyosaurs inside the specimen, but it could be as many as seven. It is possible that the mother died while giving birth, but that is not a sure thing either.

There are many mysteries about this fossil, but the specimen has helped to make one interesting aspect of the animal clear: that ichthyosaurs gave birth to live young rather than laying eggs. Ichthyisaurs are reptiles; the vast majority of reptiles lay eggs, but for an animal so highly evolved to life in the ocean, wallowing on the beach to make a nest isn’t a great option. So they gave birth in the water.

But ichtyosaurs didn’t give “live birth” like mammals do. They were ovoviviparous, which means that their young formed in eggs and hatched inside the mother before swimming out themselves. There was no umbilical cord or other mammalian features. We’ve known that some modern snakes and sharks are ovoviviparous but now, thanks to the unfortunate end of “Jurassic Mom,” along with other similar specimens, we know some ancient animals were too. It’s a big step in the study of reptile evolution. 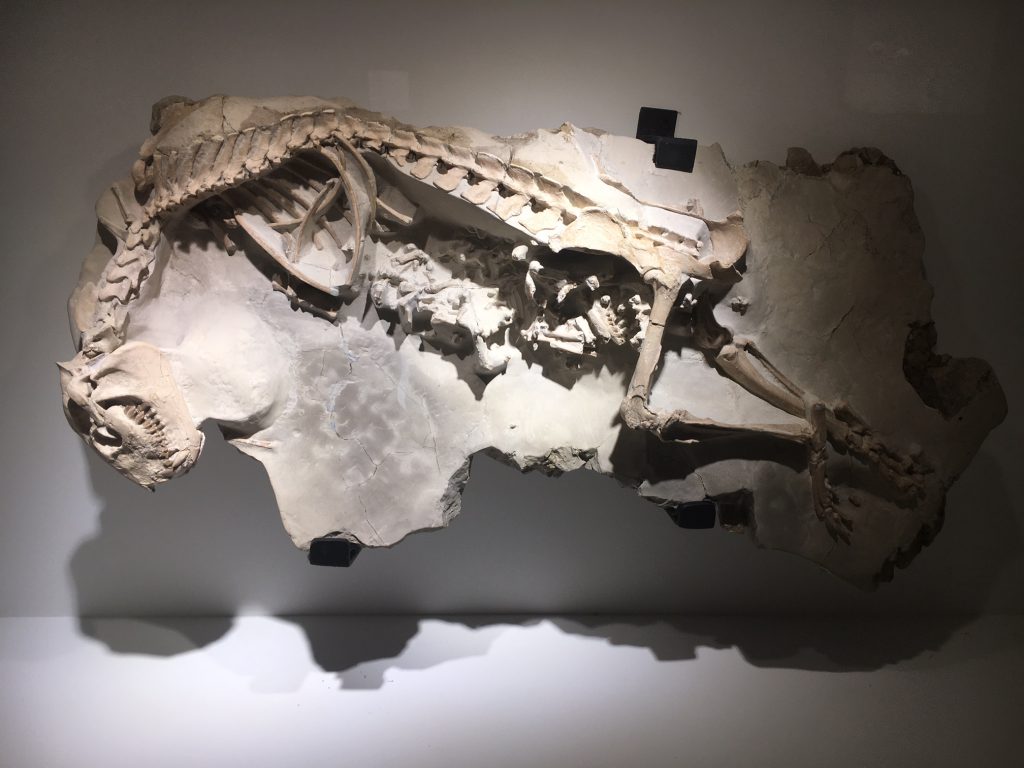 This oreodont is a great example of really good preservation caused by unfortunate circumstances; she was asleep in her burrow when a flash flood ripped through the area, filling her burrow and drowning her. Since she was already underground, and her burrow was most likely filled with sediment from the flood, she, along with her unborn offspring, were magnificently preserved. Some of the most illuminating fossils ever discovered were the result of sudden landslides or flash floods. Fast, deep burial is the best way to preserve bones and soft tissue. Burial keeps out potential scavengers, and also the lack of oxygen slows down decay. Unfortunately for the people and animals involved, the process is deadly. 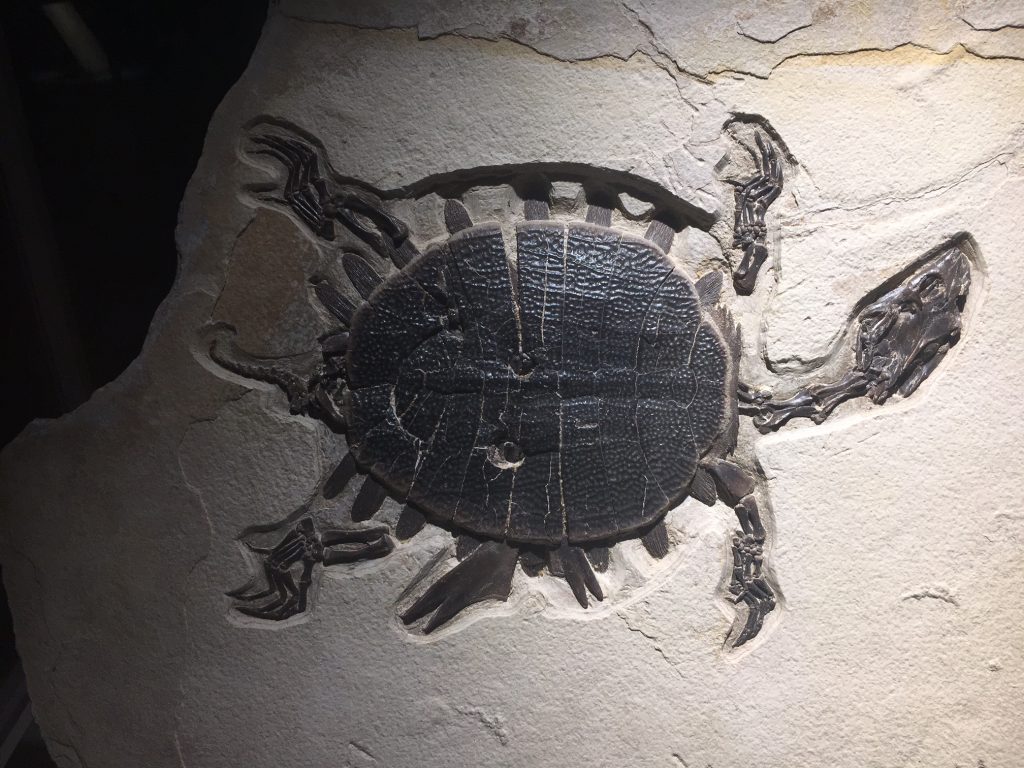 Take a look at the turtle above. Can you see the smiley face? Well, it’s actually a crocodile bite mark… I don’t think the turtle was very happy about it. Because there are no other marks on the animal, it seems that he (or she) managed to escape the jaws of his (or her) would-be predator. Unfortunately it died from its wounds soon after its great escape. It’s possible that the specimen was preserved so well because it died while hiding in some sort of hole or burrow, but that can’t be determined for sure. Either way, somehow it ended up being buried quickly after its death and was preserved very well. Not only is the specimen interesting to look at, it is preserved evidence of ancient animal behavior. Specimens like this, and the the oreodont listed above, provide paleontologists with a snapshot of what life was like during the Eocene: basically super dangerous. 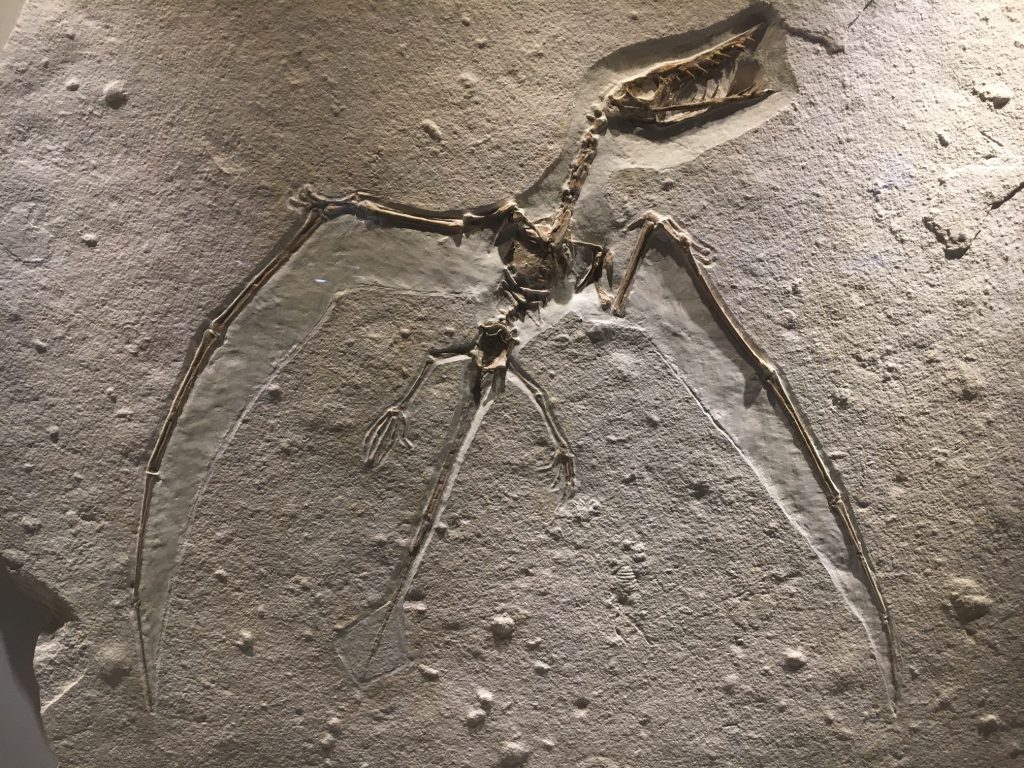 This pterosaur, rhamphorhynchus, was cruising above the coast of present-day Germany (it was a coastal region back then) when some unfortunate circumstance plunged it into the ocean. Unable to swim with its fleshy wings, it sank to the bottom of the shallow sea. Similar fossilized specimens of pterosaurs are found relatively commonly throughout that area of Europe. Their magnificent preservation is partly due to the toxic levels of salt in the lagoons that kept most scavengers away, but also killed the occasional wandering horseshoe crab like the one pictured below. 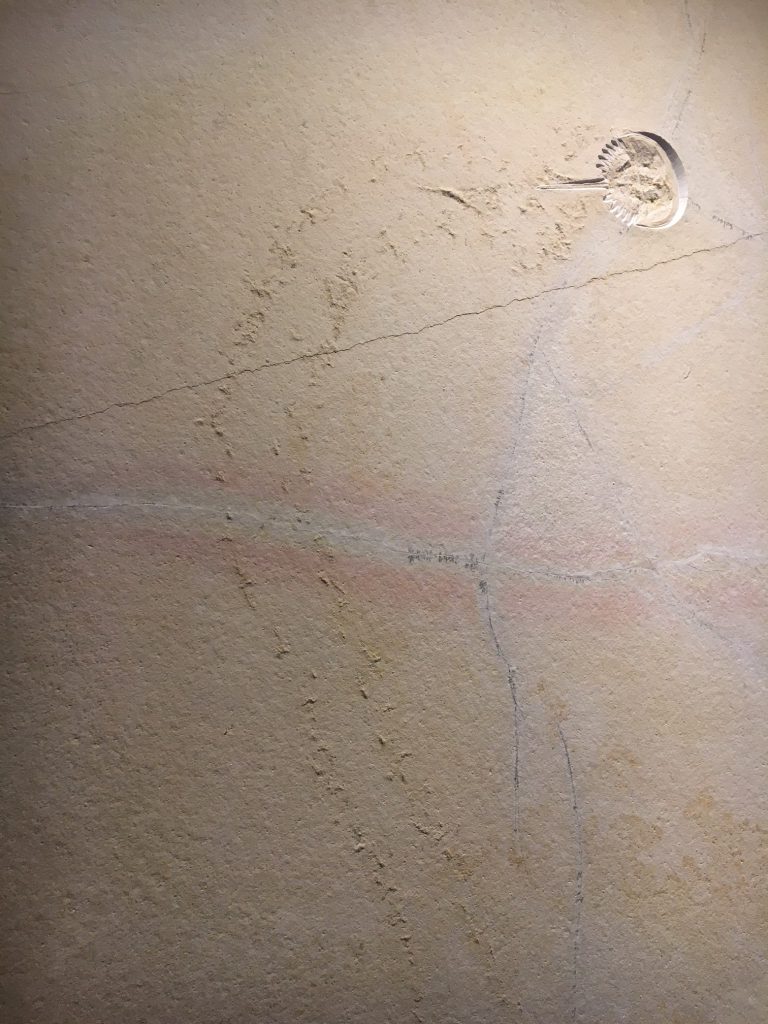 Horseshoe crab, it’s death march preserved in the rock behind it. The little crustacean was slowly killed after wandering into hypersaline waters off the coast of present day Germany.

So there it is: the dark side of Paleontology. The reality is that in order to end up on display in our Morian Hall of Paleontology, all our specimens had to die. And often it happens that the more unusual the death is, the better the preservation is. But don’t think of it as tragic irony, think of it as turning an unfortunate situation into a learning experience. The specimens in our halls aren’t only here to look at; they are here to teach us about what life was like in the past and, in the process, help us understand life in the present a little better.