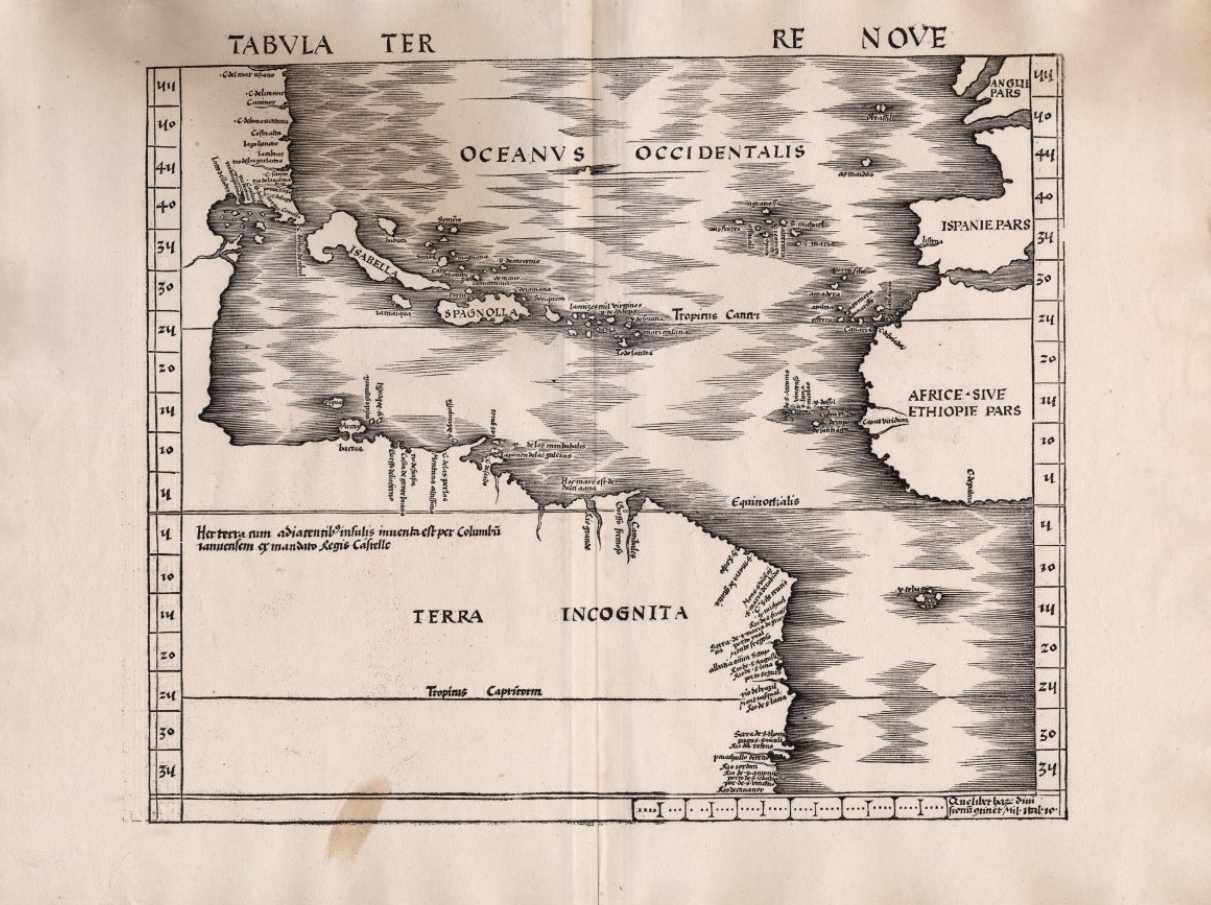 The image above is the so-called “Waldseemuller Map“, one of the oldest maps on display in our new special exhibit: Mapping Texas: From Frontier to Lone Star State.

Titled Tabula Terre Nove, the map was produced in 1513 to be included in a new edition of Claudius Ptolemy’s Geographic , a book that was originally written circa 150 AD.  The sixteenth century was a strange time. Works written a thousand years before still set the scientific standard, but as our map suggests, things were beginning to change. It was the start of the modern era,  the intellectual confluence of Roman-era knowledge, and new discoveries of the Renaissance, the Age of Exploration and the Enlightenment.

The map was made by Martin Waldseemuller, the German cartographer who gave “America” its name when in 1507 he published a ground-breaking map of the world showing the newly discovered lands to the West as an entirely separate continent. The map was based on  data brought back from the voyages of Amerigo Vespucci, Christopher Columbus and other explorers. At the time, Vespucci was published more extensively than Columbus and his accomplishments were better known, so it was in his honor that the New world was named.  Although personally I would have preferred “Christopherland”, America does have a nice ring to it.

Mapping Texas includes maps from every era from the Age of Discovery all the way to the 20th century. Each map carries with it a story of exploration, political intrigue and numerous other factors that have shifted Texas’ borders. Be sure to come check it out!

Previous Post
Jurassic Death Trap
Next Post
Xplorations Summer Camp as a former camper (or why you should enter this contest to win a free week of camp!) We Don’t Mean To Bug You, But We Have To Tell You About Our Awesome Entomology Collection!

How many of you readers collect something, whether coins, stamps, statues of elephants, vintage firearms, beanie babies (we’re dating ourselves!), shot glasses from places you’ve visited, etc.? Humans seem to have a predilection for collecting things. Some of these collections seem random, or nostalgic, or even silly – but in the case of museums, a […]