Recently I’ve been to the beach. I went down to visit an old friend, the USS Lexington. I had stayed aboard her back when I was in 9th grade, about a couple of decades ago, and hadn’t seen her since. It was good to see her again. While down on the beach I went for a quick run for a couple of miles. Sand is much harder to run on than a sidewalk. Much better to get my heart rate up. While I was running I happened along some jellyfish. I made sure not to touch them, but it was fun to look at and ponder them. It’s hard to image a being able to function without a central nervous system. How does a jellyfish gather its thoughts? And it’s not the strangest or most wonderful creature in the sea. 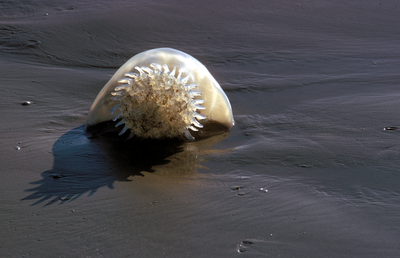 Whenever I think of the beauty of the sea, I think of sea turtles flying through the water or the majestic blue whale, the largest mammal ever. There are extremophiles, bacteria that use heat and chemicals instead of light to sustain a life so far down in the oceans that sunlight has never reached them. Or the mantis shrimp. Which is neither a mantis nor a shrimp. But in addition to having claws that move at the speed of a .22 bullet, they have the best eyes in nature. Where we have three types of color-receptive cones in our eyes, the mantis shrimp has 16! It can see colors no other animals can perceive. 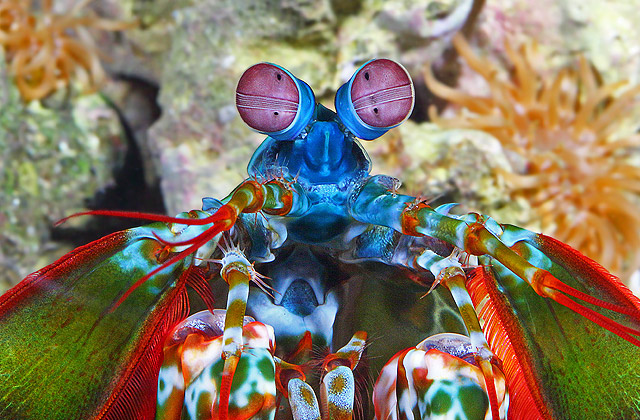 Unfortunately, with all this beauty and wonder, we have put the oceans and their bounty in danger. If you have seen the documentary Trashed or the less depressing Majestic Plastic Bag, you’ll know of the danger of plastic bags. The purpose of this plastic is to keep your food clean and make access to it more convenient, but the plastic never goes away. It never degrades; it just breaks into smaller and smaller pieces until it’s tiny enough for marine life to swallow. Plastics contain toxic chemicals and have the ability to absorb other compounds, which both leach out of the plastic over time. Fish eat the plastic, as do turtles, birds and whales, and if it doesn’t get caught up in the digestive tract and disrupt the absorption of nutrients, then the chemicals in the plastic inevitably poison them. Fish and creatures pass the plastics in their guts on to the larger predators, until eventually, you have a whopper mackerel some fisherman pulls out of the ocean for sushi, its belly full of the plastic it has collected from the bellies of other fish, flesh tainted with chemicals that have entered its bloodstream. And then we absorb all those toxins into our bodies, poisoning ourselves with each wonderful, tasty bit of sushi. 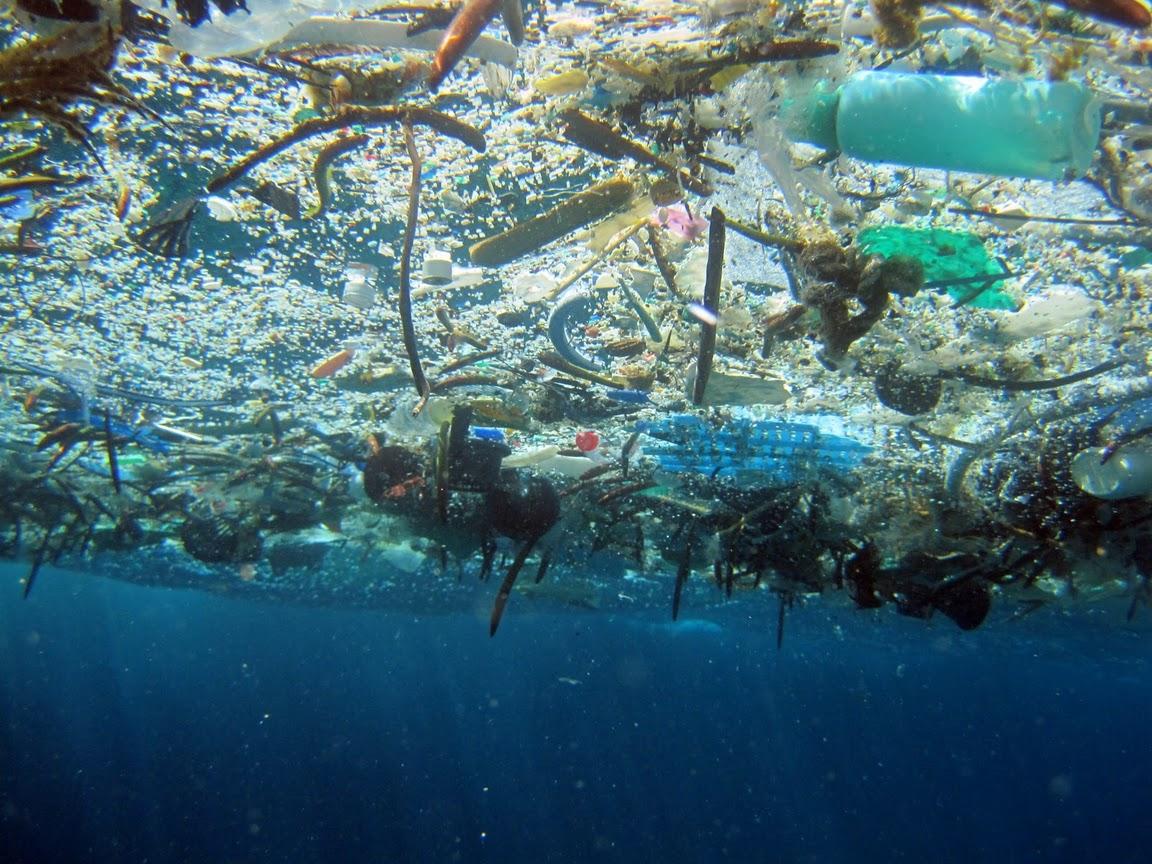 What’s the solution, you ask?  It’s certainly not giving up sushi. Never. In the short term we can use reusable bags when we get our food at the store. And gaining more knowledge about how the oceans, their creatures, and how they interact with each other is another great place to start.

So join us at the Houston Museum of Natural Science to celebrate World Oceans Day this Saturday, June 4 and learn how you can help the oceans, sushi, and yourself!

The ocean is the heart of our planet. Like your heart pumping blood to every part of your body, the ocean connects people across the Earth, no matter where we live. The ocean regulates the climate, feeds millions of people every year, produces most of the oxygen we breathe, is the home to an incredible array of wildlife, provides us with important medicines, and so much more! In order to ensure the health and safety of our communities and future generations, it’s imperative that we take the responsibility to care for the ocean as it cares for us. 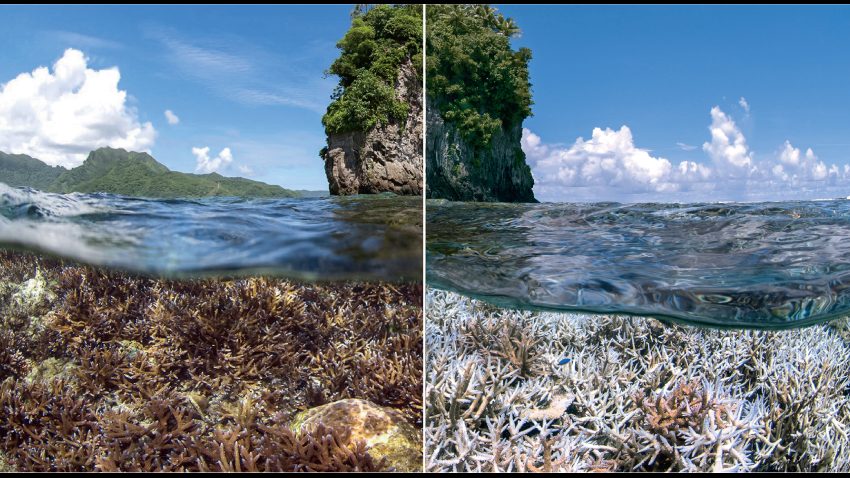 With a goal to stop plastic pollution, “Healthy Oceans, Healthy Planet” is this year’s theme for UN-designated World Oceans Day. Celebrate at HMNS with a “dive” on life-size 2D coral reefs of the Gulf of Mexico with a marine biologist of the BioSciences Department at Rice University. Free with museum admission.

And join us June 7 at 6:30 p.m. for our distinguished lecture on a major concern in coastal marine habitats: The Global Coral Bleaching Event: Causes, Consequences and What You Can Do.

Massive die-offs are occurring on reefs around the world due to the ongoing global coral bleaching event. Join marine biologist Dr. Adrienne Correa to learn the science behind bleaching, how scientists are tracking and studying the event, and the role you can play in the future of coral reefs. As a coral reef ecologist Adrienne Correa, Ph.D. works at scales that range from individual microbial strains and meta-organisms to entire ecosystems researching the diversity, stability and function of symbioses. Correa’s recent research targets novel viruses associated with stressed corals-and has documented viral outbreaks in conjunction with bleaching. She is a faculty member in the Ecology and Evolutionary Biology Program of BioSciences at Rice University. On Land and Water: the Southern Ocean and the Importance of Correct Names

As a representative of the Early Millennials, I can say with confidence most of us grew up with four oceans in our geographic vocabulary — the Atlantic, Pacific, Indian and Arctic oceans. Granted, to impress our teachers (and by impress, I mean annoy), some of us may have raised our hands to announce our awareness […]