I once heard there is an island of plastic the size of Texas floating in the North Pacific. Turns out this is just a myth.

The truth is much, much worse.

The Great Pacific Garbage Patch is not an island. You can’t stand on it or walk across it. It’s more like a cloud of suspended plastic particles ranging from the size of a person to microscopic. This patch isn’t just the size of Texas. It’s nearly as large as the United States, and it’s one of five oceanic areas with problems just as bad. 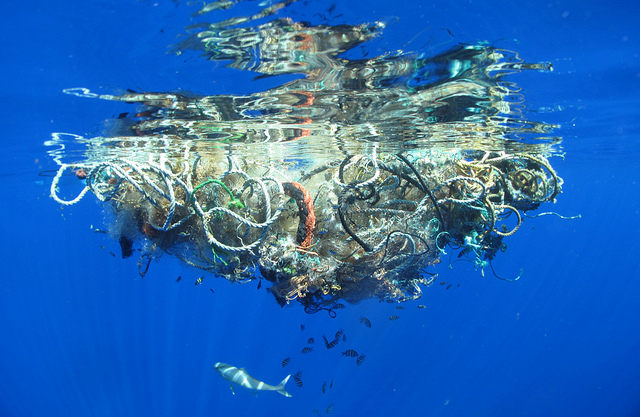 They’re called gyres, massive whirlpools that circulate the waters of the north and south Pacific, the north and south Atlantic, and the Indian Ocean, and all five of them are choked with plastic pollution. Scientists estimate there are 5.25 trillion pieces of plastic floating in the ocean, or six times more plastic by dry weight than zooplankton, the most basic and common marine fauna that ultimately feeds the entire oceanic food web. 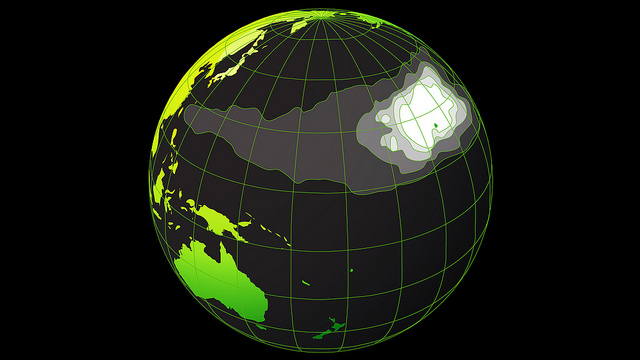 The Great Pacific Garbage Patch stretches for thousands of miles across the north Pacific.

“Plastics have only been around for 100 years or so, and they’re already a huge problem,” said Shayla Andreas, Houston Zoo staff. “Plastic isn’t bad. It’s not evil. It has allowed for medical advances and other health applications. It’s just being overproduced.”

Think about all the plastic things you put into the trash can after using them only once. Soda straws. Water bottles. Coffee mixers. Grocery bags. Netting. Fishing line. Food wrappers. The purpose of this plastic is to keep your food clean and make access to it more convenient, but the plastic never goes away. It never degrades; it just breaks into smaller and smaller pieces until it’s tiny enough for marine life to swallow. 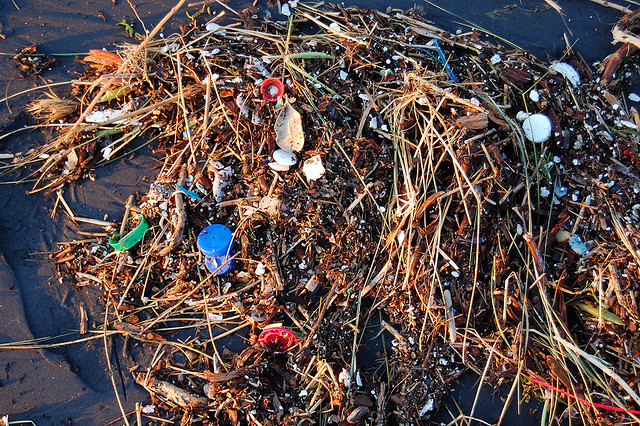 Here’s where the plastic begins to affect not only our oceans, but ourselves. Plastics contain toxic chemicals and have the ability to absorb other compounds, which both leach out of the plastic over time. Fish eat the plastic, as do turtles, birds and whales, and if it doesn’t get caught up in the digestive tract and disrupt the absorption of nutrients, then the chemicals in the plastic inevitably poisons them. Fish and creatures pass the plastics in their guts on to the larger predators, until eventually, you have a whopper mackerel some fisherman pulls out of the ocean for sushi, its belly full of the plastic it has collected from the bellies of other fish, flesh tainted with chemicals that have entered its bloodstream. No one wants to eat that. 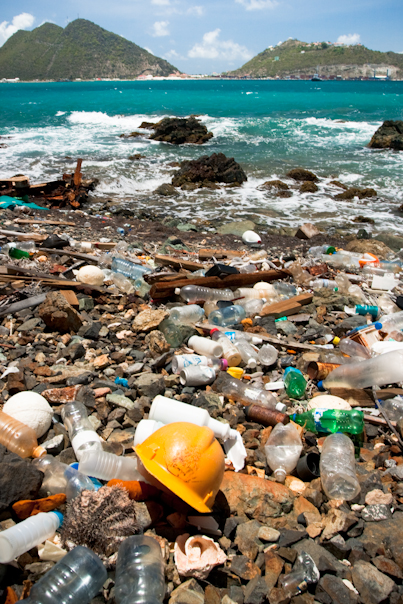 The point is, the plastic that’s meant to protect us could ultimately poison us. The greatest problem, according to Marcus Eriksen, Director of Research for the 5 Gyres research project, are microplastics, specifically microbeads that lately have appeared in cosmetic facial cleansers. These beads, no larger than a fleck of dirt, are used a single time as an exfoliant, then washed down the drain and into the sewers, which in turn enter watersheds that feed into the ocean. 5 Gyres claims this is the most dangerous source of plastic pollution, and Andreas agrees. Because of their minute size, microplastics affect the most marine life. Small fish can ingest the particles as well as some of the largest predators. 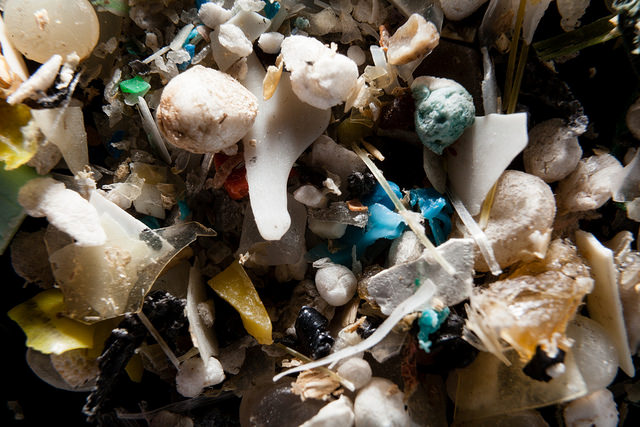 Microplastics are the greatest threat to the health of the ocean.

“The smaller the plastics are, the worse the problem is,” Andreas said. “Especially for baleen whales that eat krill. They filter out the water and the krill stays in the baleen, but so does the plastic.”

Cleanup of microplastics appears next to impossible, even for 20-year-old environmentalist Boyan Slat, Dutch inventor of a groundbreaking gyre cleanup array and founder of The Ocean Cleanup. His array involves a passive, angled catch system that floats on the surface of the ocean and uses the motion of gyre currents to funnel plastic into its vertex, where a solar-powered conveyor constantly lifts the pollution out of the water and into a single container. 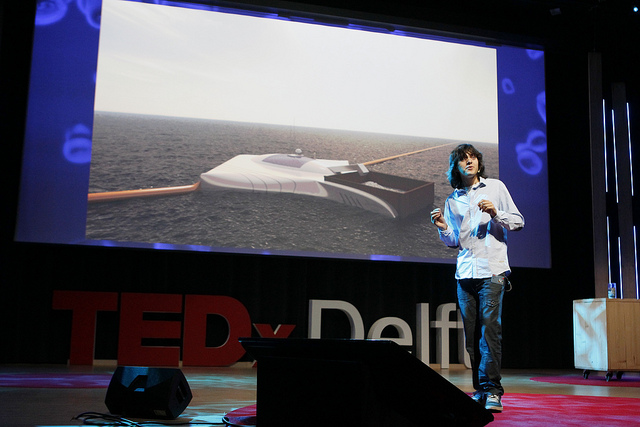 The mission of the non-profit is to deploy an enormous 100-kilometer-long array in the north Pacific, which Slat estimates will remove half of the plastic in the Great Pacific Garbage Patch in 10 years. Slat plans to deploy a smaller pilot array off the coast of Tsushima, an island between Japan and South Korea, in 2016. At 2000 meters in length, it will still be twice as long as the record-holder for the largest floating structure deployed in the ocean in history, the Tokyo Mega-Float, a floating airport.

But Slat’s array provides no solution for microplastics and smaller particles which will elude his array. His invention offers a promising, cost-effective, and feasible beginning to cleaning up the mess, but it won’t solve the problem completely, which Andreas believes starts at the point of sale for every consumer and with responsible manufacturing.

“It comes down to researching the products that you use. You have to care,” Andreas said. “And you have to get them to care about it. Taking initiative, behavioral change, is so easy to do. People have to make a concerted effort not to get them.” 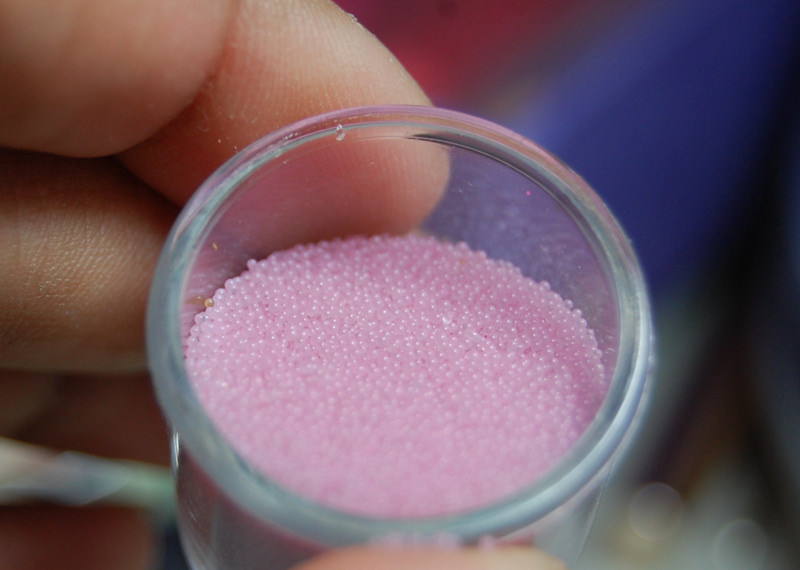 Microbeads used in cosmetic facial cleansers are washed down the drain and enter the ocean via watersheds.

Consumers should consider choosing biodegradable alternatives to products that contain microbeads. Exfoliants should be made from natural materials.

Word is beginning to spread about the direness of the plastic pollution situation. The Houston Museum of Natural Science recently celebrated the United Nations-established World Oceans Day, an event that drew out about 2,000 people. Representative faculty from Rice University and Texas A&M University emphasized the importance of keeping plastic out of the ocean, and guests had an opportunity to estimate the amount of biomass living in the Flower Garden Banks National Marine Sanctuary and look inside the stomach of a thresher shark specimen. 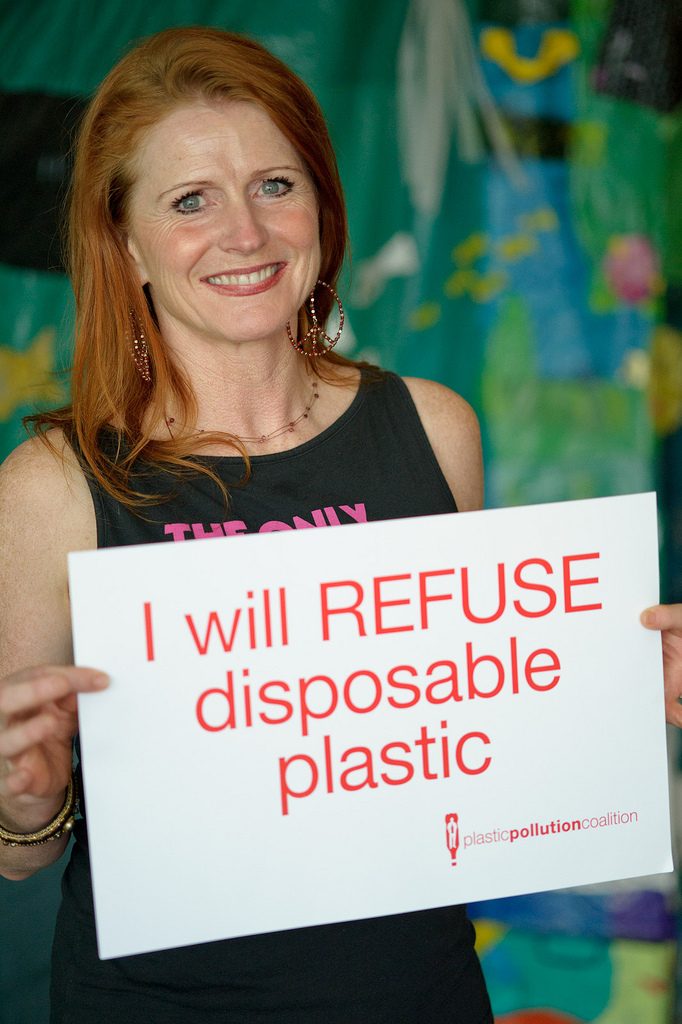 Plastic may make human life more convenient, but single-use plastics have become a problem that can no longer be ignored. The only viable solution may be better choices to prevent plastics from entering the ocean in the first place. Reuse plastic bottles or take your own refillable water container. Choose to bring your own reusable bags to the grocery store. Never toss plastic or any garbage into the environment. And always, always recycle.

Previous Post
Mark Your Calendars for these events happening at HMNS 6/8-6/14
Next Post
Ice cream science: Make a cool treat to beat the summer heat I once heard there is an island of plastic the size of Texas floating in the North Pacific. Turns out this is just a myth. The truth is much, much worse. The Great Pacific Garbage Patch is not an island. You can’t stand on it or walk across it. It’s more like a cloud of […] Flooding changed the face of Houston Monday and Tuesday, turning the peaceful bayou into a raging torrent swelling beyond its banks, spilling over major highways and washing into communities where it did its worst damage. Busy roads turned into lakes of steaming vehicles as hundreds were lost in the floodwaters, and some 1,400 structures were […]