Summer is here and the kids are out of school, so what better time to escape the heat and join us here at HMNS for some cool and educational arthropod experiences! The Cockrell Butterfly Center will be welcoming back a popular summertime program and introducing a couple of new ones which will be sure to excite the bug lover in everyone! Every week this summer, we will be giving you a chance to get up close and personal with some of our famous residents on three different days. Here’s a little about what we’ll be up to…

Small creatures, big information! Every Tuesday, in the Children’s Area on the main level of the CBC, we will be introducing you to a different resident of the Brown Hall of Entomology. Our entomologists will bring out our biggest and most exotic creatures as well as some familiar (or not-too-familiar) Houston natives. Giant katydids, Atlas moths, and odd arachnids are just some of the creatures you will meet. Each talk will fill your head with all kinds of cool information and facts about our feature creatures. Afterward, we will answer any questions you may have. Up-close viewing and sometimes touching will be permitted, and definitely feel free to bring the camera! 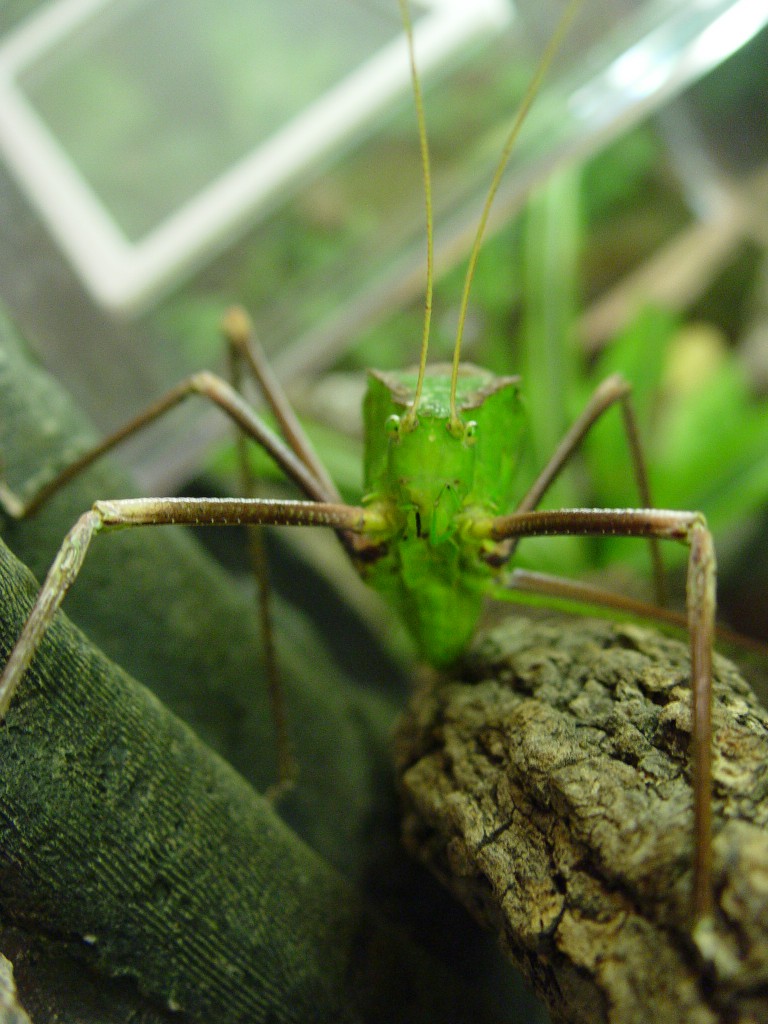 At the CBC, you can watch brand-new butterflies emerging from their chrysalises, pumping blood into their newly formed wings, and preparing for their first flight. After this, enter the rainforest filled with lush tropical plants and hundreds of butterflies fluttering through their naturalistic habitat. But, how do they get there? Every Wednesday morning, join our entomologists outside of the Chrysalis Corner in the Brown Hall of Entomology. We will talk about a typical butterfly release and answer questions. Then, you can walk into the rainforest and watch as brand new butterflies take their first flight in their new home. Touching of the delicate butterflies will not be permitted, but please feel free to take as many pictures as you want. 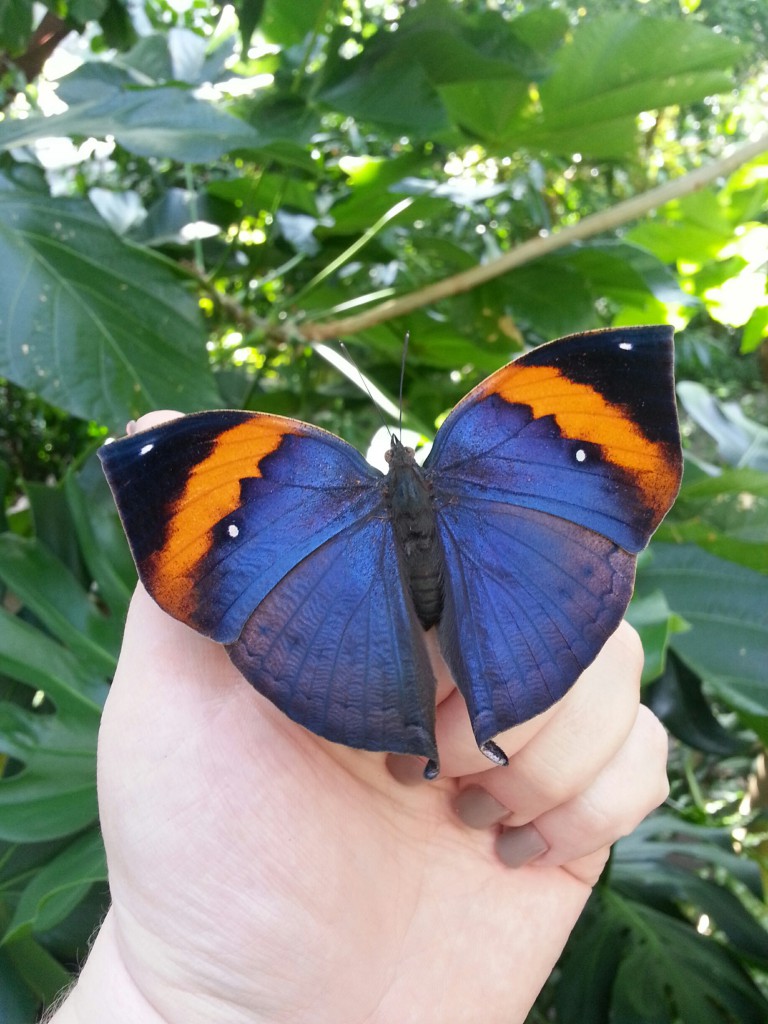 The main event! Get ready to see huge, ferocious, carnivorous insects and other animals feast on their prey in front of your very own eyes! This Friday and every Friday throughout the summer, the Cockrell Butterfly Center will be feeding a live animal for your viewing pleasure. We have several arthropods and even some reptiles that we will showcase. Here is a little about the line-up… 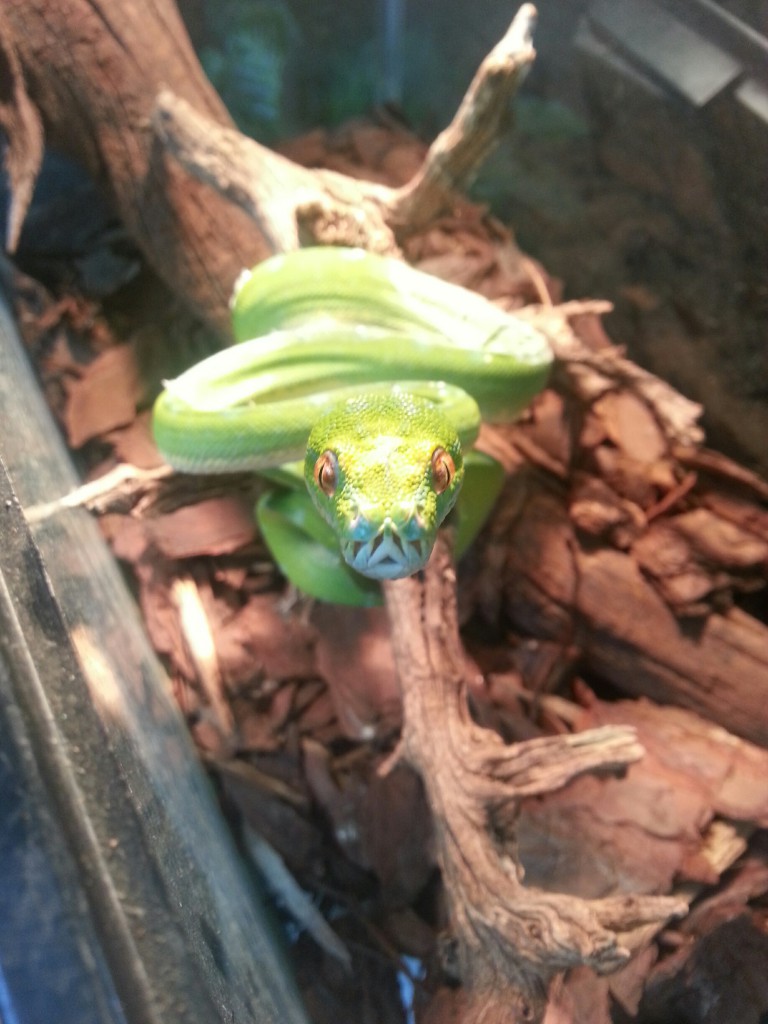 Green Tree Pythons (Morelia viridis): Our green tree pythons, Kaa and Nagini, will be ready to dine on mice! These snakes are native to Indonesia, Australia, and New Guinea. Pythons are non-venomous snakes that subdue their prey by constricting. Their food consists mostly of small mammals and the occasional reptile. They lay in wait, curled around a tree branch, and when potential prey approaches, they strike from an “S” position, using their tails to anchor themselves to the branch. Once their prey is snagged, it’s lights out! 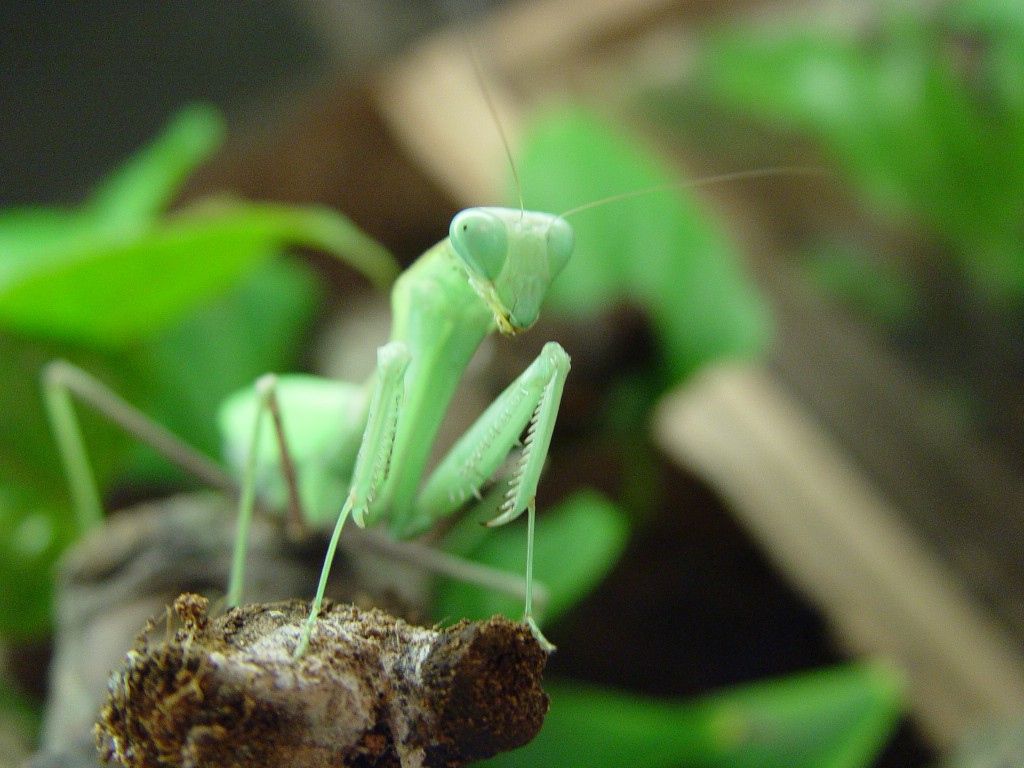 Giant Asian Mantis (Hierodula membranacea): This praying mantis, one of the largest species, comes from Southeast Asia. Mantises are ambush predators and have several features that ensure their success in catching prey. Their amazing camouflage allows them to resemble either living or dead parts of plants, flowers, tree bark, stones, or sticks. Not only does this help conceal them from predators, it also keeps potential prey oblivious to their presence. An insect that wanders too close is snatched by raptorial front legs (legs specialized for grabbing) and held still by several tough spines. The mantis uses chewing mandibles to eat its victim alive. Mantises have excellent vision at close range and can see as far as 20 meters. Their eyes are large and located on the sides of their head, allowing the insect to see all around itself. They can keep their eyes on potential prey by inconspicuously moving their heads up to 180 degrees. Nothing can escape their field of vision. Most mantises feed on smaller insects, but some giant species can take down small reptiles, amphibians, and even rodents! 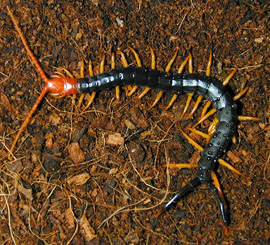 Giant Centipede (Scolopendra heros): Centipedes are predatory, long-bodied arthropods with many pairs of legs – one pair per body segment. Centipedes are venomous and can be dangerous, so they are not to be confused with the congenial millipede, which poses no threat to humans and has four legs per body segment. This centipede, AKA the giant red-headed centipede, can run very quickly to pursue and catch its prey, which it immobilizes with repeated bites from two venomous fangs. Once dead, the prey is devoured. Giant centipedes of this and similar species are found in Mexico and the southwestern United States. The coloration, known as aposematic or warning coloration, serves as a message to other animals: “Touch me, and you’ll get more than you bargained for!” A bite from one of these can cause intense pain that lasts for hours or days and can cause a severe reaction in someone who is allergic. These hunters take down smaller arthropods, small reptiles and amphibians, small rodents, and have even been known to hunt tarantulas!

Wolf Spider (Hogna carolinensis): This is the largest species of wolf spider found in the United States! Most wolf spiders are large and can sometimes be confused with tarantulas. The name wolf spider refers to their hunting behavior. Instead of building a web, they wait to ambush their prey and at other times, they chase it for a short distance. Wolf spiders inject venom into their prey to immobilize it. They then use digestive enzymes to liquefy the insides and then slurp it up through a tube that leads to the stomach. Wolf spiders have no interest in biting people, but will if provoked. The severity of their bite has been compared to that of a bee sting.

Goliath Birdeater Tarantula (Theraphosa blondi): This is the big mama of all tarantulas and regarded as the largest spider in the world. They can reach a weight of 5.3 ounces (more than a quarter pounder) and have a leg-span of 12 inches (about the size of a dinner plate). The name birdeater is a misnomer as they do not eat birds, although they could. They are native to marshy swamplands in South America, and like other large spiders, they feed on mostly insects. However, because of their size, they often go for small reptiles, amphibians, and rodents. If threatened, these tarantulas can produce an eerie hissing noise by rubbing together setae on their legs. If that doesn’t creep you out enough to stay away, watch out for the urticating hairs they kick off their abdomens into the air. If these hairs come into contact with your skin, you get really itchy, and you don’t even want to know what happens if they get in your eyes! Birdie is our resident birdeater and she’s a thrill to watch as she shoves as many crickets into her mouth as possible!

So if creepy crawlies are your thing, visit the CBC this summer, and witness the goings-on of our staff and our tiny, fascinating residents.

Previous Post Memorial Day Floods: a natural phenomenon
Next Post Mark Your Calendars for these events happening at HMNS 6/1-6/7

In my early 30’s, I first learned about proper care and maintenance for pruning tools. Not to sound dramatic, but it has changed my life. I had no idea the power that basic household white vinegar holds over a pile of derelict tools. We all have that pair of crunchy old clippers, or that socket […]

Praying mantises are true masters of disguise. Like many insects (and other animals), mantises will use their cryptic appearance to blend into the environment. For praying mantises, camouflaging has two-fold benefits. For one, mantises are preyed on by many animals- including birds, lizards, frogs, small mammals and even larger mantises. Staying hidden from these predators […]