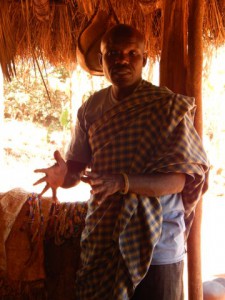 See that guy? That is Martin, and today we visited his house. He is one of the chiefs of the Irwq tribe, the second largest group in Tanzania (after the Maasi).

The Irwq (which is nearly impossible for English speakers to pronounce because it requires a guttural sound) are agriculturalists. The traditional Irwq house is built into the ground, due to a slight conflict with the Maasi who believe that all of the cows in the world belong to them. The Maasi would come to the Irwq villages in the middle of the night to “reclaim” their lost cows. To compensate, the Irwq started building their houses into the ground as dugouts so that when the Maasi would look for the Irwq houses, none would be visible.

In 1974, the president of Tanzania said that the Irwq couldn’t build thier houses in this manner any more because it used a lot of trees, and he understood the need for conservation. To stop the conflict between the Maasi and the Irwq, the president declared if the Irwq could prove that their cows had been “reclaimed,” the government would give them 10 cows to replace it. This eliminated any hostilities between the two groups almost immediately. 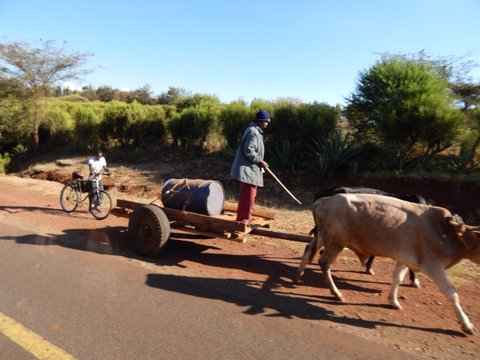 Martin (our friend pictured above) is allowed to keep his house because he and his tribe teach traditional crafts and ways to the Irwq people (and a small group of HMNS travellers), somewhat like a museum. He taught us about two very important parts of his culture: beer making and wedding skirts.

The “local beer” is super important and is prepared before any big job, ceremony or wedding. To make it, corn is ground and mixed with yeast and cane sugar or honey. Finger millet is ground and added to this after a few days. It is then boiled and left to sit for two days. On the third day, it’s ready.

After trying the local beer, which I would say has the flavor of applesauce made from diluted vinegar, I think I will stick with Shiner.

The other skill Martin’s wife, Victoria, showed us was how to make a wedding skirt. The skirt is made from dried goat skins. Once the skin has been dried out, a special tool is used to scrape off the hair. The skins are then cut into wedge pieces and sewn into an apron shape, and beading is applied. 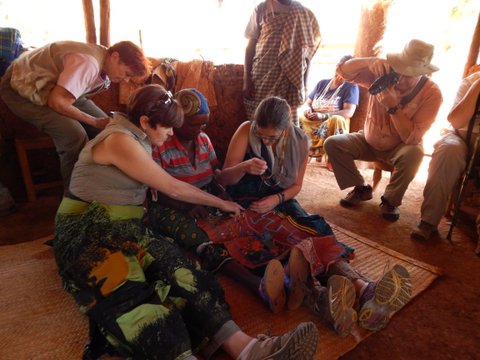 When Victoria asked for volunteers to try the beading, I hopped right up! Sewing is a skill I can get behind. The beading is similar in technique to Native American seed beading and every pattern has a meaning. 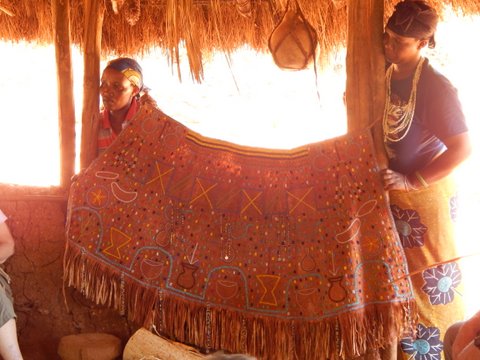 The blue river pattern, Martin explained, is a metaphor for life. The river goes up and down, just as life has ups and downs. In the rounded patterns at the bottom you can see the tree of life, and just above those you can see a gourd shape, which represents a calabash.

The colors have meanings as well. Yellow represents the natural resources and minerals, green for vegetation and black for the African people.

The best part of the visit happened in the last few minutes. Some of the village children were playing in the bushes and found a chameleon. Apparently the kids are taught that chameleons are poisonous (maybe to keep them from bothering them?), and I have heard a couple different versions of folk tales that say if a chameleon bites you, it won’t let go — and the chameleon becomes part of you. So the kids were willing to show us the chameleon, but from the far end of a very long stick. 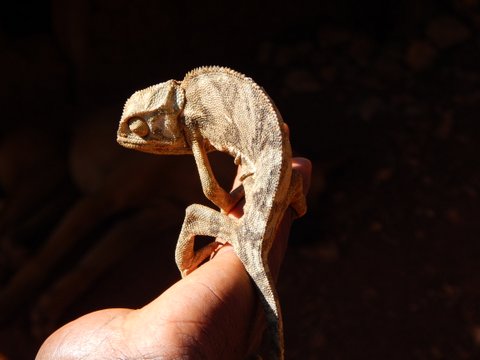 We, on the other hand, had no such worries, and you can tell by Dave’s face that he was tickled pink to get to hold it. 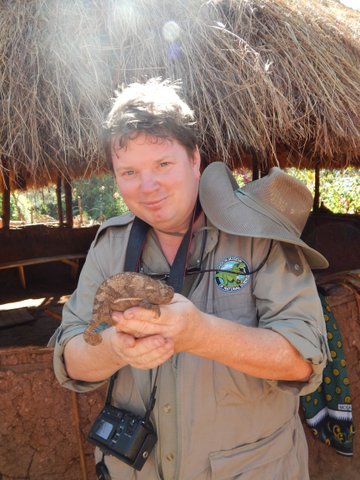 One response to “Tales from Tanzania: Making beer, wedding skirts & attaching to chameleons with the Irwq”

Previous Post In the spirit of Dickens, waste less this Christmas
Next Post Tales from Tanzania: Witnessing the resiliency of nature at Lake Manyara National Park

Well, the news is out, and here’s the scoop. The Houston Museum of Natural Science is involved in the next great discovery in the world of paleontology. In the forests of Myanmar, scientists have unearthed several pieces of 99-million-year-old amber that contain some of the best-preserved prehistoric lizards ever found. These little creatures walked alongside […]

Tales from Tanzania: Oh, the things you’ll find in a caldera

Tales from Tanzania: Water, bricks & the ingenuity of Tanzanians

The hard work and ingenuity of the Tanzanians never ceases to amaze me. While traveling one day, we passed the man you see in the photo below, and several more like him. When I asked Simon (my driver guide for the day) what was going on, he explained that they were hauling water. A water […]

Tales from Tanzania: Witnessing the resiliency of nature at Lake Manyara National Park

Our first game drive through the 285 square miles (460 km2) of Lake Manyara National Park did not disappoint. Covering 89 square miles (231 km2) of the park, Lake Manyara is a salt lake ranging from 20 to 50 feet deep. The lake’s high alkalinity comes from sodium bicarbonate, which leaches out of the volcanic rock […]

Tales from Tanzania: Making beer, wedding skirts & attaching to chameleons with the Irwq

See that guy? That is Martin, and today we visited his house. He is one of the chiefs of the Irwq tribe, the second largest group in Tanzania (after the Maasi). The Irwq (which is nearly impossible for English speakers to pronounce because it requires a guttural sound) are agriculturalists. The traditional Irwq house is […]

Tales from Tanzania: That’s no mint on your pillow

Some hotels leave mints on pillows. But in the African Serengeti, you get assassin bugs. Dave and I had been actively searching for invertebrates on our trip to no avail. The guides thought we were weird (crazy) from all of our questions about insects (as well as snakes and lizards). No one goes to Tanzania […]