The truth of the matter is that we humans are bound to this Earth. As the dominant species, it is easy for us to allow industry and propaganda to run rampant, annihilating whole populations of the animals with which we share the environment. One shepherd will kill the wolf who threatens his flock, one company will dynamite a mountain to extract an ore, and that may be fine. But if all the shepherds and all the companies kill and dynamite at once, that is a menace to the natural world. And as long as we continue to take advantage of quiet places virgin to human feet, or villainize an animal as a man-eating monster, the diversity of life on earth will always be in danger. 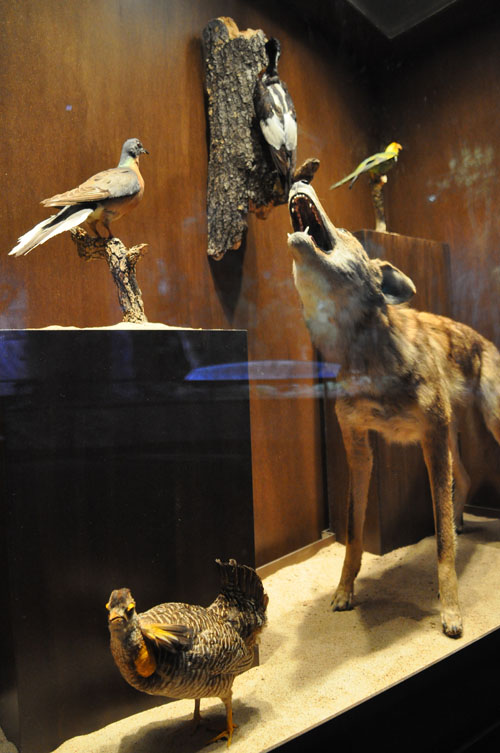 A red wolf specimen behind glass appears to be mourning the loss of endangered and extinct species in the case beside it, in Texas, and across the globe. Farish Hall.

The question you have to ask yourself on Endangered Species Day, and every day, is are we really still competing with animals to gain a foothold on this rock we call home, or are we simply the most ruthless? One death by mauling, even 10 or 20 or 120, does not constitute a credible threat to humanity; there are billions of us. Call a shark, a bear, a wolf, a lion, a panther, any apex predator a danger to one or a small group of humans, but the time of fighting to survive in the jungle has passed. True, African villagers still suffer casualties due to contact with lions; yes, trekkers in the Rocky Mountains must remain vigilant for cougars and bears to avoid attacks; and yes, 10 people were killed and 87 were injured worldwide by sharks in 2014, but modern humanity now has the power to slaughter every last individual of any species. It’s not that difficult, and often it’s due simply to the spread of our kind into wild areas for resources or human development. 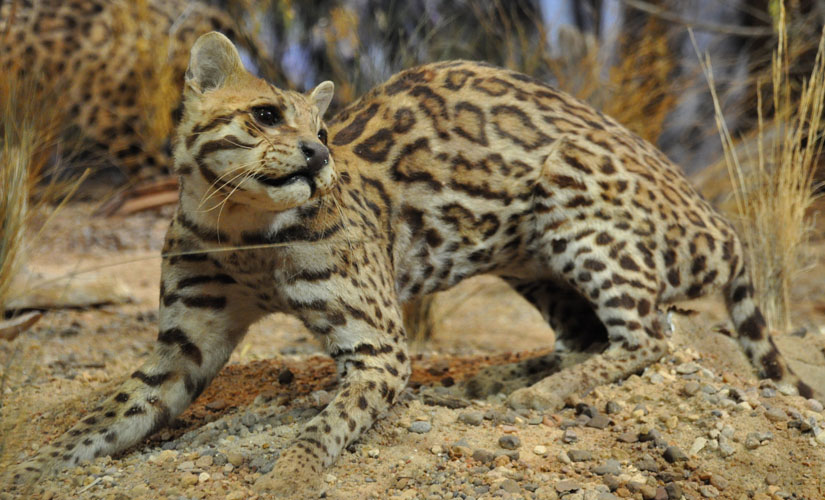 Less than 1,000 ocelots are thought to survive in the wild. Farish Hall.

In the case of sharks specifically, 97 casualties in 2014 does not and cannot ever justify 100 million sharks killed every year. That’s about 274,000 dead sharks a day, or 11 shark killings per hour. A shark dies at the hands of a human, somewhere, every six minutes. Even nuisance animals aren’t this systematically destroyed. The World Wildlife Fund lists great white sharks as vulnerable on their endangered species directory, facing high risk of extinction in the wild. We don’t know much about shark biology and behavior, but we do know they play an important role at the top of the marine food chain, according to the WWF. They might all die before we get to know them. 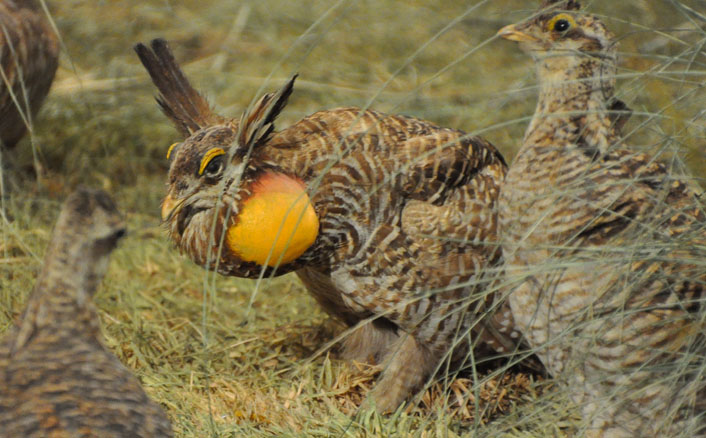 Sharks aren’t the only species in danger, of course. Many other animal populations have dwindled to mere hundreds. Biologists count 880 mountain gorillas left in the Virunga Mountains of central Africa. Imagine having only 880 humans on the planet. That’s barely the size of a small town in Texas, one of those places Grampaw says you’ll miss if you blink as you pass by. As few as 3,200 tigers live in the wild across the planet, the WWF says, and giant pandas, the mascot of the organization since 1961, number just above 1,800. Our favorite mammals are nearly gone. Just as gone as the dinosaurs. When they’re gone, they will never come back. Ever. 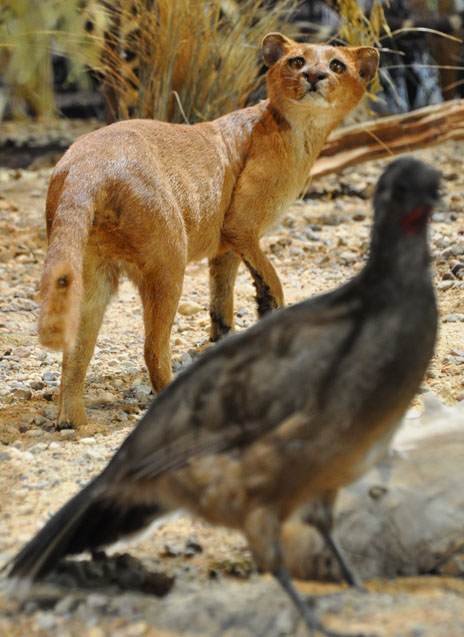 Native to southern Texas, the jaguarundi is one of many endangered predators. Farish Hall.

In Texas, from the pounding Houston rain to the burning sun of El Paso, the steamy barrier islands to the prairie grasslands and canyons in the panhandle, it seems the big sky country has enough space for everything. But farming and introduction of non-native species, as well as the urban sprawl surrounding our boundless cities, has built a long list of endangered species. Texas Parks and Wildlife lists the Kemp’s Ridley sea turtle, the Attwater’s greater prairie-chicken, the wooping crane and the red-cockaded woodpecker endangered in Harris County, as well as the red wolf, the smalltooth sawfish, the Houston toad, and the leatherback sea turtle. Some of these exist only in wildlife refuges. 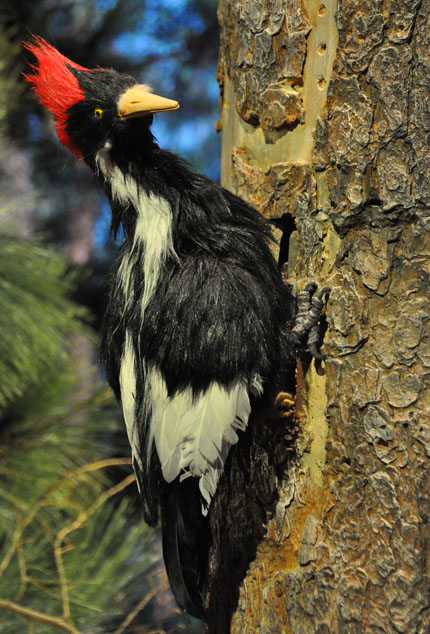 The ivory-billed woodpecker, native to Texas, is critically endangered and thought to be extinct. Animatronic specimen displayed in Farish Hall.

The concrete city landscape of Harris County has replaced the natural habitat, a corner where coastal, wetland, and piney forest environments merge. As the city expands, roaming species like the red wolf are pushed out of their home territories while their numbers decline, but other creatures that rely on this area specifically for the resources the environment provides simply fade away. The Kemp’s Ridley feeds only in muddy or sandy bottom habitats, those brackish areas where swamp meets seawater, and while they migrate across the Gulf, these turtles still require coastline to nest. Other migratory species like the whooping crane use the coast as winter breeding grounds. As development continues, these environments shrink or change enough to kill off such species. 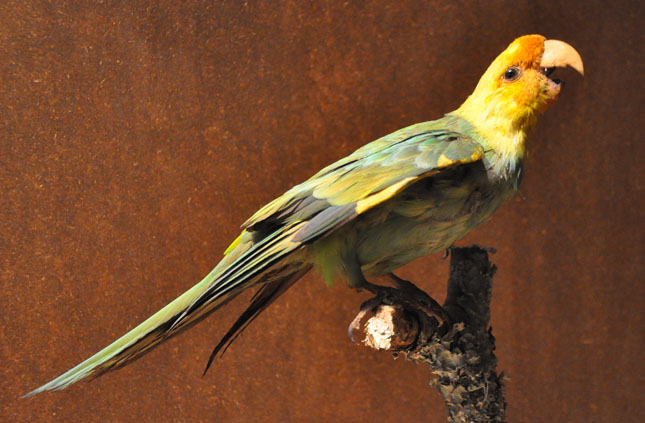 The Carolina parakeet, once native to Texas and most states along the eastern coast of the United States, was declared extinct in 1939. Farish Hall.

Texas used to have its own native parrot, the Carolina parakeet. This beautiful tropical bird with red, yellow and green feathers, suffered devastating losses from deforestation and feather-hunting. It was declared extinct in 1939. Its range extended in the eastern United States from New York to Texas. The Houston Museum of Natural Science has a mounted specimen on display in the Farish Hall of Texas Wildlife, alongside many other examples of native and endangered species. Apart from taxidermy, this parrot exists only in the imagination. 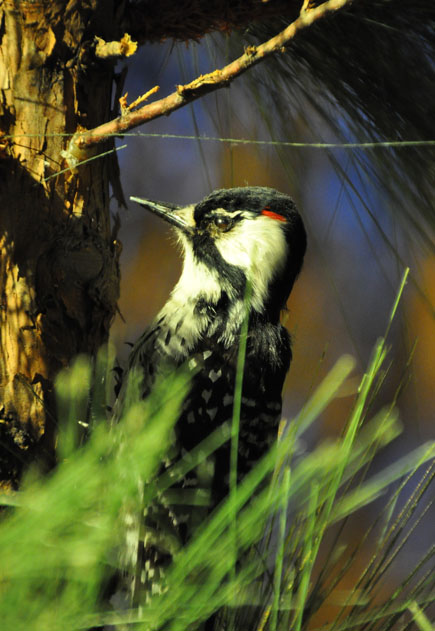 The endangered red-cockaded woodpecker is losing its habitat in Texas due to loss of the piney woods environment in which it lives and hunts. Farish Hall.

Next week, HMNS guests concerned about endangered species can come to the Hamman Hall of Texas Coastal Ecology, a new permanent exhibit adjacent to Farish Hall opening May 22, to learn more about the relationship between the environment and the economy. Some of Texas’s iconic species, including rare and endangered plants and animals, will appear on display. After touring these exhibits, visit the 100 awe-inspiring images of the 50 Years of Wildlife Photographer of the Year display. Some of these, like the photos of legal lion hunting, hyenas eating from a human garbage dump, and prospectors destroying thousands of acres of virginal forest for minerals, reveal just how awful things can get when we neglect the natural world. 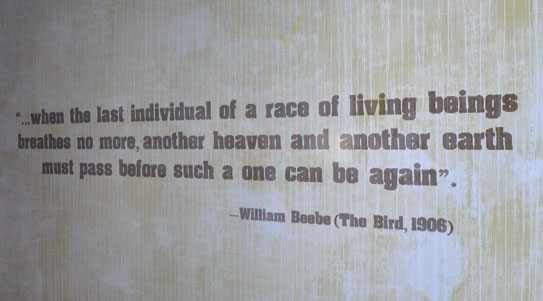 A quote by William Beabe in the Farish Hall of Texas Wildlife reminds us why we should care about endangered species.

Why should you care about extinction on Endangered Species Day? Because if a species dies out, it never comes back. Every creature is important, unique in its behaviors or adaptations or the shape and color of its body. If these creatures disappear, the only way we can get to know them is through history and in museums, not through personal experience. We will never know what we could have learned from them. We are the stewards of this planet now, not its owners. We rely on it much more than it relies on us. If we don’t help preserve life, these endangered species are as good as stuffed. And when they all die off, we’re next.

Previous Post
Get wet, go wild, or blast off with new Party Smarty birthday themes at HMNS
Next Post
Ants in your Plants: Mutualism benefits both myrmecophyte and insect Since our new special exhibit Mummies of the World has officially opened for all to come and see, we thought it would be a good idea to publish a series of blogs about the different kinds of mummies featured in the exhibit. Oh yes, not all mummies are the same. In fact, not all […]