If you didn’t already know, we’re in the process of raising money to repair the Gueymard telescope at the George Observatory in the Save Our ‘Scope campaign. And thanks to you, we’ve raised over $65,000 of our $80,000 goal through donations ranging from $1 to $5,000 — and we’re grateful for every last one of ’em.

But what’s the big deal? I mean, you can totally just buy a new mirror at Target or something, right? Well, in a word: nope.

Telescopes are amazing pieces of equipment – dauntingly large (the Gueymard weighs 10 tons) and yet incredibly delicate. If the mirror in a telescope warps just a few centimeters, it can vastly distort the images you see. Therefore, it’s extremely important to keep these machines in tip top condition.

Think of telescopes as an extension of your eyes. We can’t see things far away very well. When you look at the sky at night (and it’s dark enough) you see tons of tiny specks of light – some are stars, some are planets, others are galaxies, or even galaxy clusters. The light can travel for thousands (or millions or billions) of light years. The light heads right into your eye, onto your retina, and sends a message to the brain that says, “Hey, that’s neat, a speck of light.”

However, due to the distance involved, we can no longer appreciate the scale or detail of the images. The further away an object is, the smaller the space it takes up on the retina.

Telescopes fix all of this so that a bright, detailed image can reach your eye as it captures more light and then focuses and magnifies it.

Lenses bend light waves, either causing them to converge (focusing light) or diverge (spreading out light). Glass lenses were used in the creation of the first telescopes, called refracting telescopes.

In this model, light passes through the objective lens, which collects the light, causing it to converge on the eyepiece where it is then magnified. These images would become distorted, however, as different wavelengths of light bend at different angles and focus at different points. 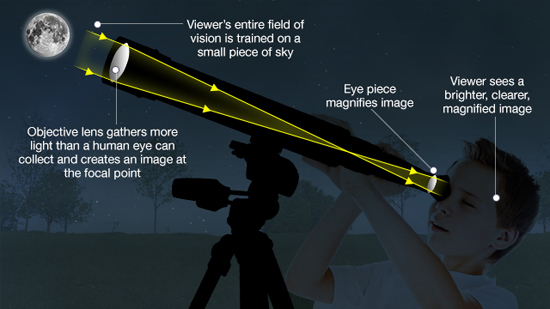 Mirror, mirror on the wall

So, how do you solve a problem like bent light? In a word: mirrors. With reflecting and compound telescopes, the light doesn’t pass through the objective lens. Instead, it is reflected (via concave mirror) back to a smaller mirror, directing the light to the eyepiece where it is magnified. Ta-da! Beautiful, clear images of faraway objects.

The cool thing here is that the larger your mirror, the more light you capture, giving you higher resolution images with better detail. 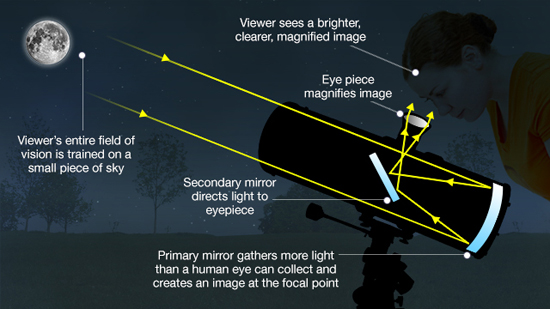 The bigger, the better?

If your goal is to capture as much visible light as possible, then yes, bigger is better. But this comes with special problems too. Mirrors can get heavy – very heavy. Think about it: our Gueymard telescope mirror is 36 inches in diameter, and some mirrors can be several hundred inches in diameter. Now that’s a lot of mirror! All of this weight can change the shape of the mirror so that, over time, they sag and no longer properly focus light to another point.

This issue can be solved with honeycomb mirrors. No, they’re not made by bees. Rather, they’ve been influenced by the structure of a honeycomb. This allows the face of the mirror to be well supported, while reducing the weight of the mirror up to 80 percent.

Now that you’re (sorta) a telescope expert, come see the big stuff at the George Observatory in Brazos Bend State Park! Houston’s really lucky to have this observatory in its backyard, so to speak, since the Gueymard is the largest telescope in the country open to public viewings.

Can you spare a George for the George? We’d greatly appreciate if you pitched in to help save our ‘scope. Your efforts ensure that Houstonians can continue to stargaze through the most incredible telescope they’ll ever get to use for many years to come.