Passion. It has a funny way of shaping your life, and for three women, a passion for astronomy brought them all to The George Observatory. Tracy Knauss, Hannah Lange, and Alicia Tristan have all found their way to the George Observatory, working as either staff or volunteers, for years, and the journey that led them there began when they were children. 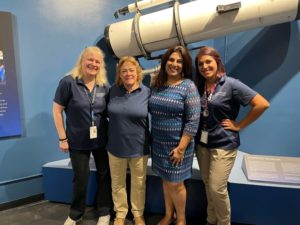 From Left to Right: Hannah Lange, Tracy Knauss, Kavita Self and Alicia Tristan.

Tracy, the Director of Astronomy at the George Observatory, can’t remember a time before she was passionate about the cosmos. “Space has always fascinated my imagination. My dad was part of the ‘put a man on the moon’ program, so I can always remember looking out at the stars.” For Alicia, she remembers the exact moment that sparked her passion. “I first became interested at age 6, after viewing comet Hale-Bopp on its spectacular pass through the solar system in the Spring of 1997”, she said. “From the very beginning, I was intrigued by the massive scope of the subject – there is always more to learn about our universe!” Hannah had a similar experience while viewing the Andromeda Galaxy through a pair of binoculars at 8-years old, stating that she’s had a love for the stars and astronomy ever since.

Their collective love for astronomy eventually led them to The George, as its affectionately known by staff and volunteers. But why The George? What is it about this observatory that draws people to it? Besides the stunning glances of the galaxy as seen through the 36′ Gueymard Research Telescope, there are two reasons; how accessible it is to the general public and the fantastic volunteers who help run The George. The George Observatory is unique because it houses one of the largest telescopes open to the public in the United States; many research-grade observatories are inaccessible to the general population both figuratively and literally, as a large number of them are in remote locations. The George Observatory is conveniently located just 45 miles south of downtown Houston, an easy distance for the 2.3 million people who call Houston home.

The other reason why people are drawn to the George Observatory? The same reason why Tracy, Hannah, and Alicia have found a home there – the people! A wonderful set of volunteers help run the George Observatory, especially during George Member Nights and Saturday Stargazing. They operate the telescopes in the domes, show guests how to use their own telescopes, and share their knowledge freely and warmly. According to Alicia, the volunteers at The George are the heart of the facility. “We have a very diverse and talented group of amateur astronomers, who are always keen to share their passion for this science with the public and serve as mentors for the newer volunteers.” It is this true passion on behalf of the volunteers that has guests returning season after season.

Most of all, the George Observatory is an inspiration, especially for children who, like Tracy, Hannah, and Alicia, harbor a passion for the stars. “Here at the George Observatory, we can show them the wonders of the night sky still exist,” says Tracy.  “If we can’t do that, kids will eventually give up their spark with astronomy. Any donations we receive help maintain this place so generations from now, kids can still appreciate the night sky.” And right now, thanks to an extremely generous $50,000 matching grant opportunity from The George Foundation, when a donation is made in honor of The George Observatory, that gift is doubled!

Whether you have a passion for the stars or you just enjoy the occasional night of stargazing in your backyard, a visit to The George Observatory is a must. And while you’re there, consider making a donation so the future Tracys, Hannahs, and Alicias can continue to be inspired by the wonders of the night sky.

Previous Post
Saturn Rises | July 2021 Sky Happenings
Next Post
LET’S WRITE ABOUT Dinosaurs with HMNS
Become A Member Support The Museum + Benefits Vist HMNS.org
Editor's Picks The Real Moon Hoax That You Haven’t Heard Of Is Darwin relevant today? Oh The Hermannity! The Story of Houston’s Most Beautiful Green Space A Few Member Benefits Most HMNS Members Don’t Know About What The Loss Of The Museu Nacional in Rio de Janeiro’s Collections Means To The World What Is The Deal With Brontosaurus?!