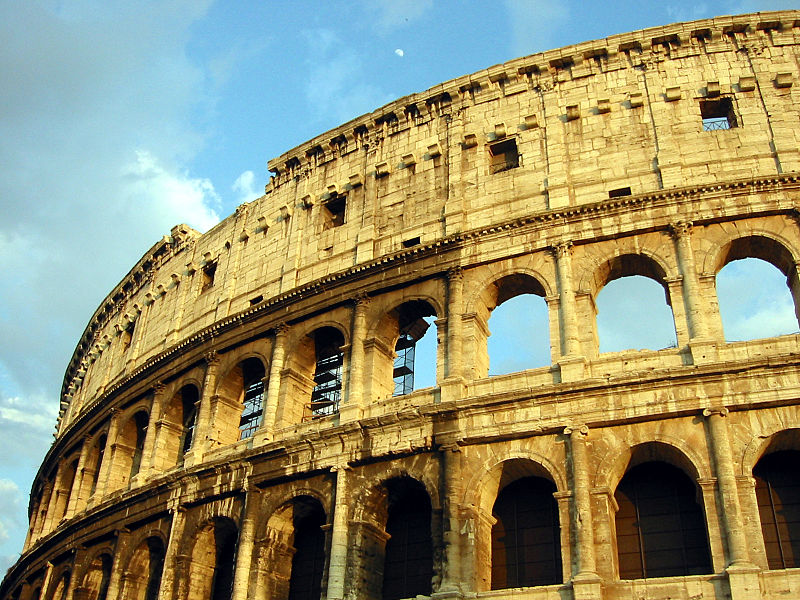 Like any good sports fan in human history, as a typical Roman during the era of gladiators you were expected to know all the pertinent information for your favorite fighter. This would include keeping up with the current rankings of your favorite fighter, knowing the advantages and disadvantages of the opponents and attending the matches. Gladiators in ancient Rome chose stage names much like professional wrestlers today. Some were common names taken from Greek mythology or they could be descriptive macho names like, “Flame” or “Brave.” Some even chose to lure opponents into a false sense of security by choosing a name like “Pearl.”

Unlike professional wrestling (mostly), almost all the gladiator types wore a helmet with their faces covered, so the only way to recognize your favorite gladiator was by his armor.  Given that in the Colosseum you might be seated several hundred feet away in the stands amidst 45,000 of your fellow Romans, this was no easy feat.  The armor of each fighter must stand out but yet still serve its function of keeping its wearer alive while at the same time providing maximum entertainment value.

Gladiator Fan Guide 101
There were many types of gladiators that were common in other places besides Rome or even across different eras. Here is a short list of popular gladiator types and how to recognize them if you were a visitor in the stands of the Colosseum.

Murmillo
The Murmillo or “the fish man” was a heavyweight gladiator, although he’s typically only going to wear a total of four pieces of armor. This included a helmet, one arm guard, a long rectangular shield and one leg guard.  The only weapon he carried was a short sword called the “gladius.”  He would look like this: 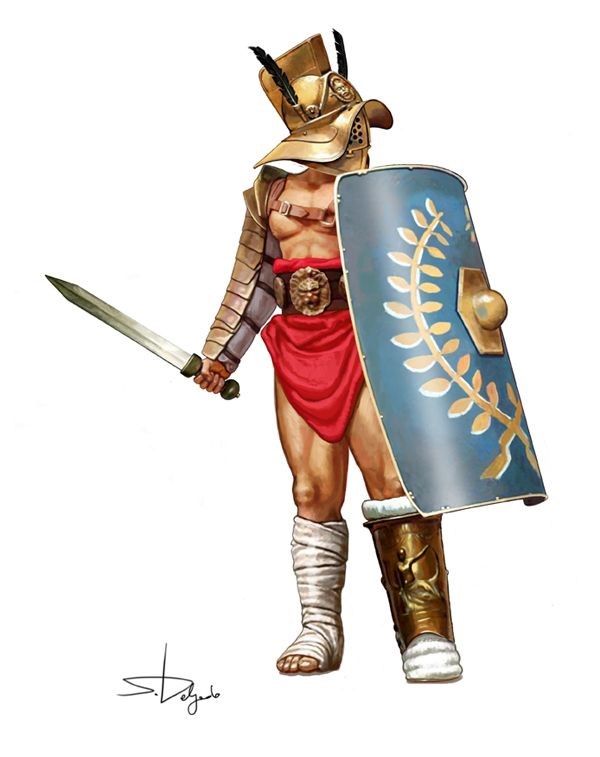 A closer look at that helmet would show you a wide brim with an iconic crest over the top of the helmet and many miniature eye holes across the front to give a good view of the opponent.  Here is a helmet example preserved in an exhibit in Pompeii, Italy: 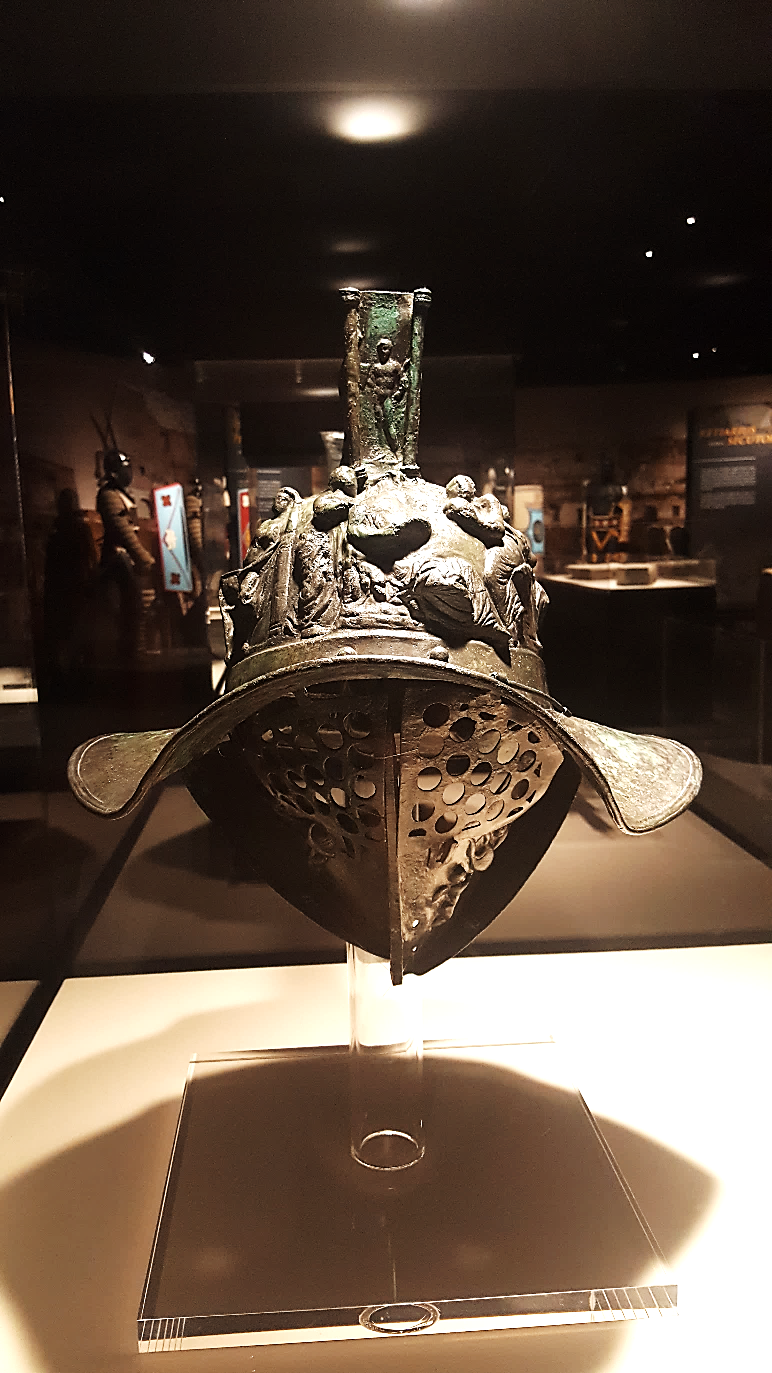 Thraex
Thrace was a region Souteastern Europe ruled by a series of tribes whose soldiers were famed for their skill and military prowess. The Thraex or the “Thracian” was almost a caricature of a Thracian soldier. This gladiator carries an iconic curved blade but wore a limited amount of armor which amounted to just two leg guards, one arm guard and somewhat smaller shield.  A typical gladiator of this type might look like this: 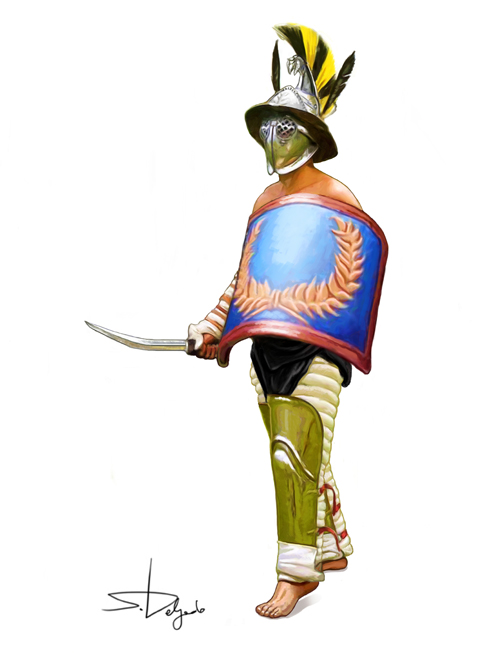 Romans viewed an exciting fight as one where the opponents were unevenly matched.  A heavyweight paired with a light(er) weight or more armor with fewer weapons against less armor with more weapons, etc.

Hoplomachus
The Hoplomachus or the Greek “hoplite” warrior was again based off another of Rome’s defeated enemies.  This gladiator had a much smaller helmet, a single arm guard and two leg guards.  However, he would be recognized by his iconic long spear and small, round shield paired with a knife.  This type would look like this: 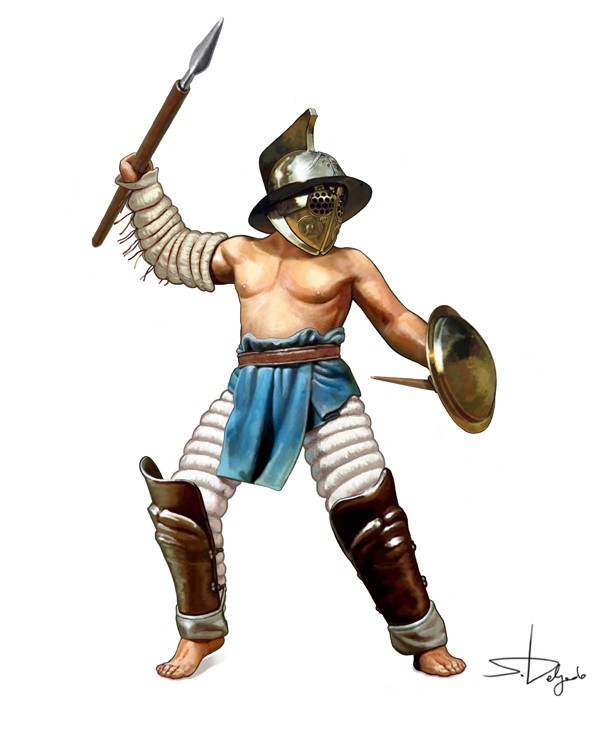 The advantage of the Hoplomachus would be in his reach.  Those spear tips are terrifyingly large, seen here for perspective with a close-up and then with the photographer’s hand next to it: 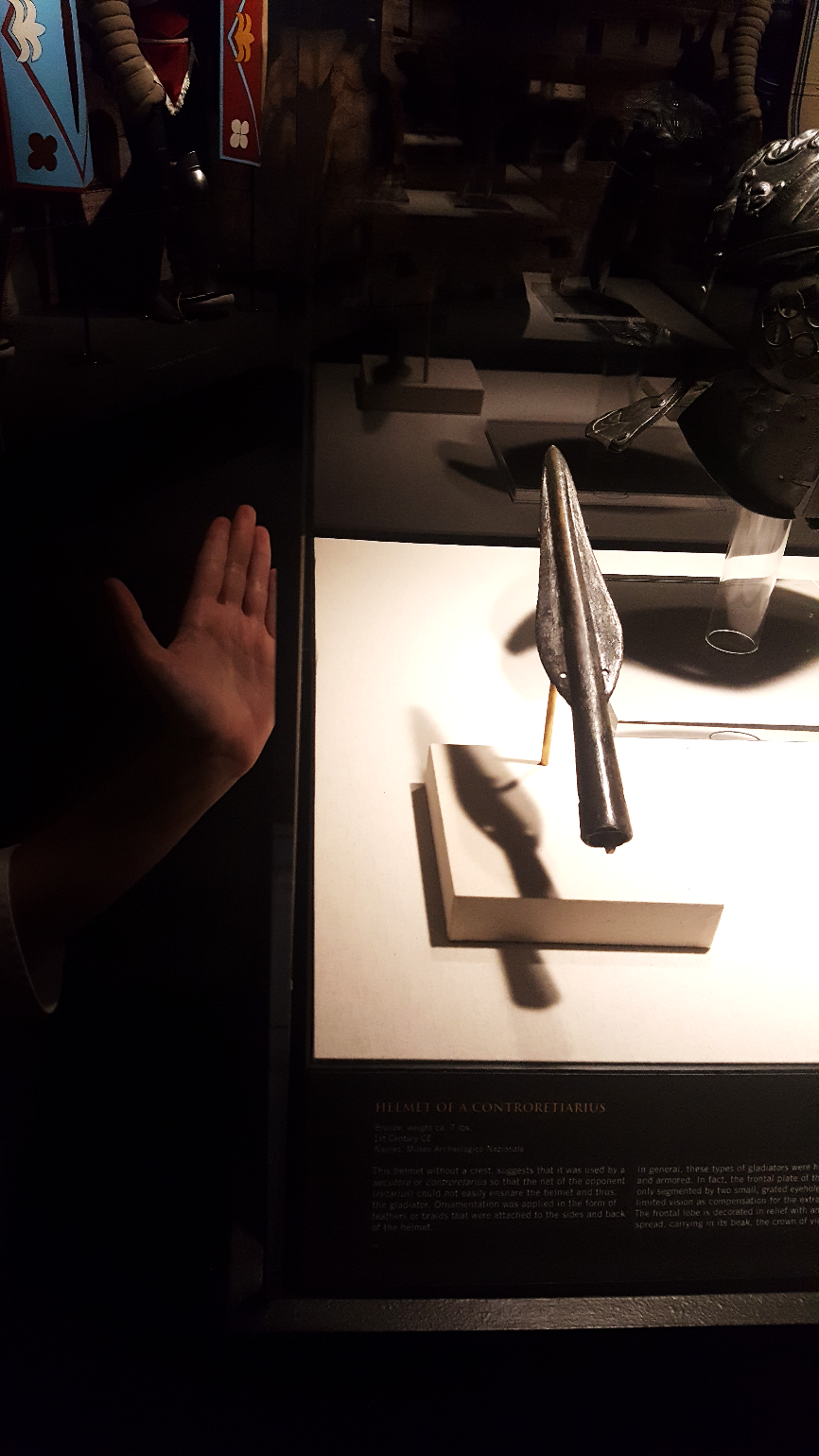 However, as soon as an opponent got under this gladiator’s defenses, the armor is minimal.

Retiarius
The Retiarius or the “net man” is the most extreme of the gladiator fighters.  He wore almost no armor—only one pitiful arm shoulder guard–but was covered in weapons.  He carries a trident, a weighted net and a knife as seen here: 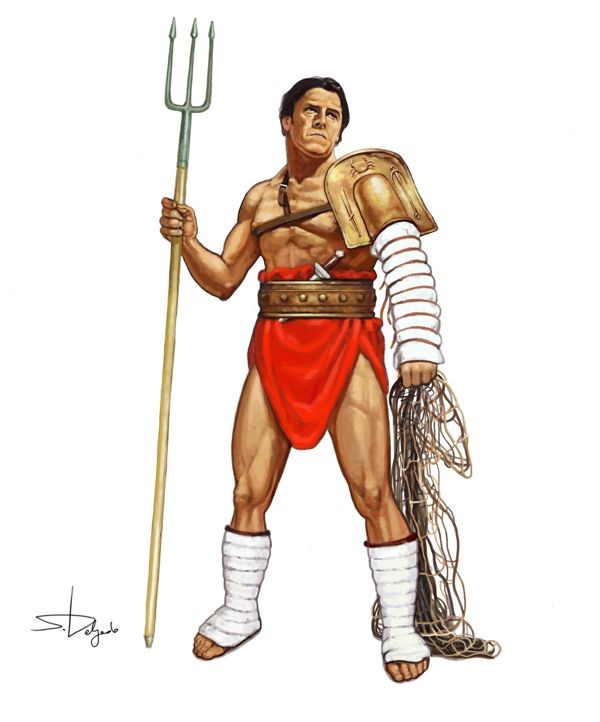 In this case, he is the one exception to the typical gladiator. Instantly recognizable by the net and trident because his face is exposed.  If any other type wanted the audience to recognize them individually, presumably they must have some iconic move or fighting style to prove who they are.  This guy just walks into the arena.

Secutor
The Secutor or the “pursuer” or the “chaser” is one of the few gladiators to be paired with another fighter.  He is normally pitted against the “Retiarius.”  His helmet is almost a flat piece of metal, with only two tiny eye holes and ergonomic crest (so as not to get trapped in the net).  He carries a short sword and armor of the “fish man,” like this: 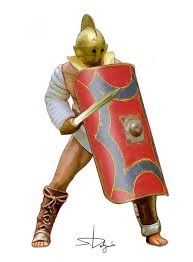 One could imagine breathing in the hot, midday sun of the Colosseum might prove difficult in a helmet like that, much less actually seeing a nimble opponent all while wearing virtually no armor.

Scissor
Not all gladiator armor or types had a rational explanation beyond entertainment and sheer curiosity.  The Scissor gladiator embodies that notion. There are no original depictions preserved, though it would seem it was a fairly popular and exciting gladiator to watch based how often people wrote about them.  As close as we can tell, they would wear the leg guards and helmet similar to the Greek fighter (hoplomachus) but instead of a shield, he carried an arm guard that ended in a single-edge curved blade, something like this: 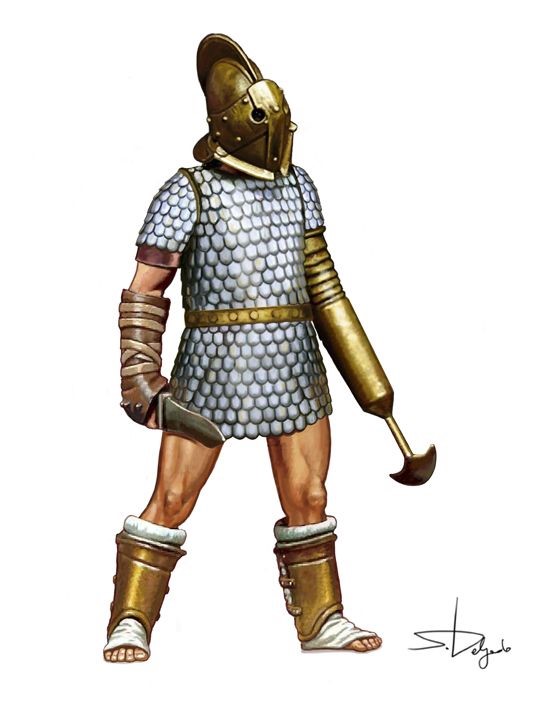 For good measure, he carried the gladius in the other hand to “finish” the fight.  I will leave the interpretation of that to your imagination. 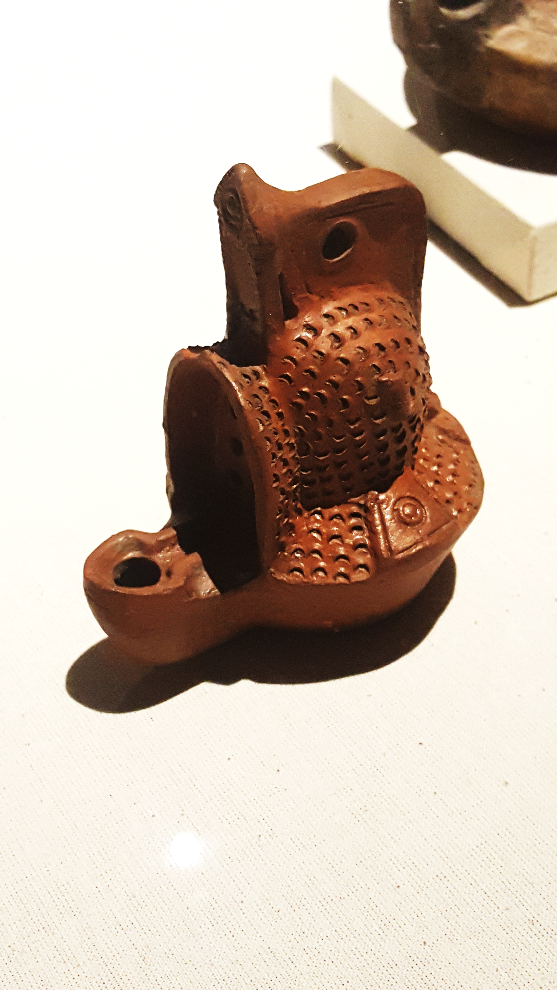 Or possibly documenting a famous fight, or your favorite individual’s fight: 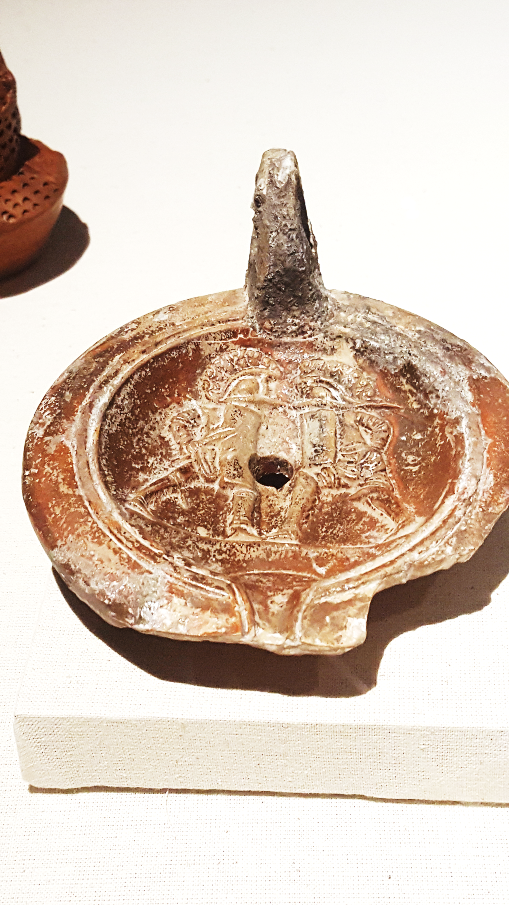 (two murmillones fighting against each other)

If you’d like to see these pieces in person and learn more, Gladiators: Heroes of the Colosseum is on now on display  at HMNS through September 4th.  Let us know who your favorite fighter would be in the comment section.

Corey combines a lifelong love of science with a passion for teaching. She specializes in kid’s tours and has been at HMNS since 2012. She enjoys music, physics, ceramics, and storm photography. When not in one of our special exhibits, she can usually be found explaining about mummies in the Hall of Ancient Egypt or dinosaurs in the Hall of Paleontology.