After my visit to Paris, I thought it high time I went to a place closer to home that has fossil records of some of my friends in the dinosaur world. Can you guess where? 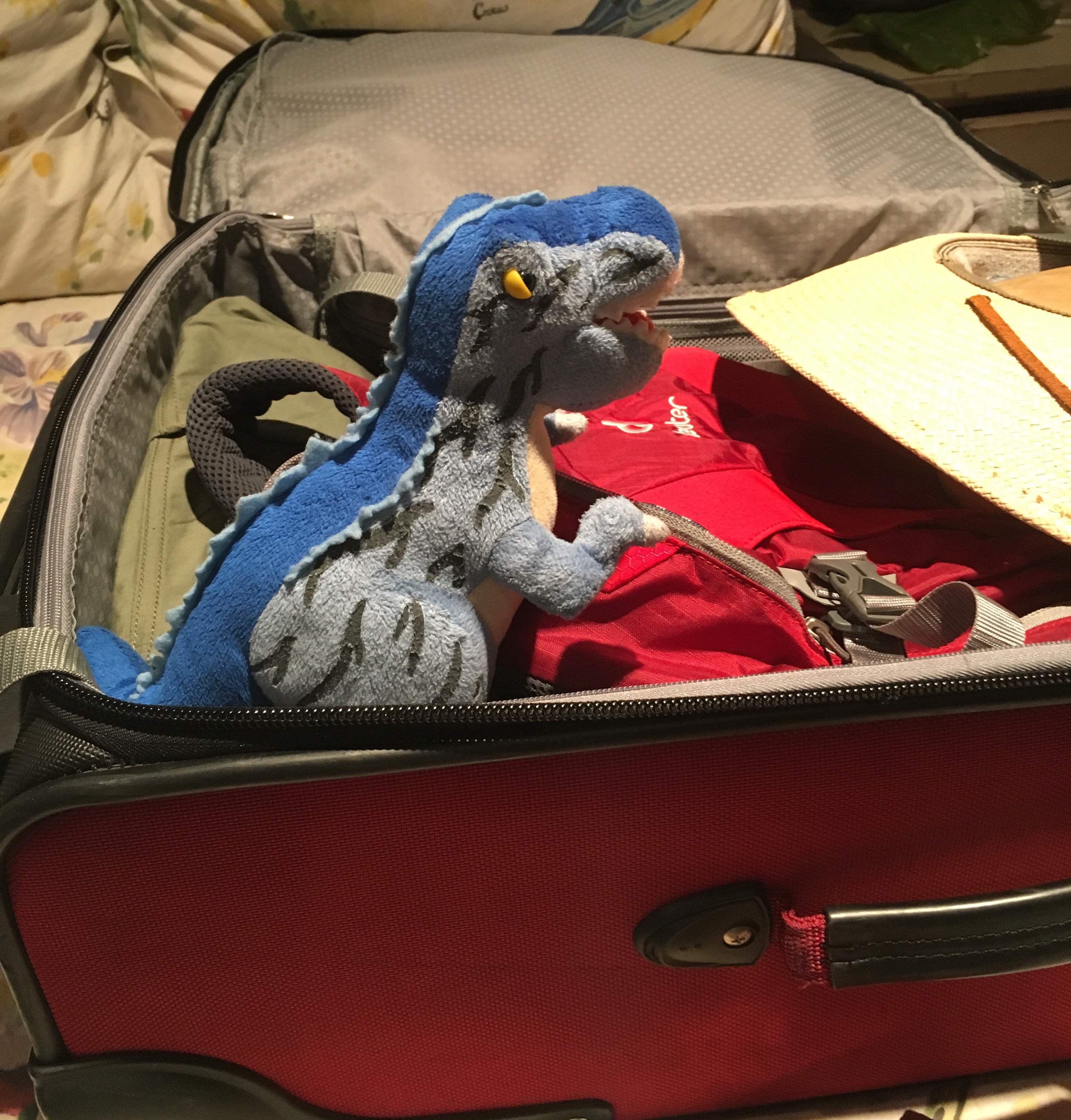 So, I hunkered down in my suitcase for the short flight to Midland, Texas, my jumping-off point for my adventure to the Big Bend National Park. Don’t worry. I brought sun protection (a hat) and extra water because I was planning to hike as well as learn a few things. 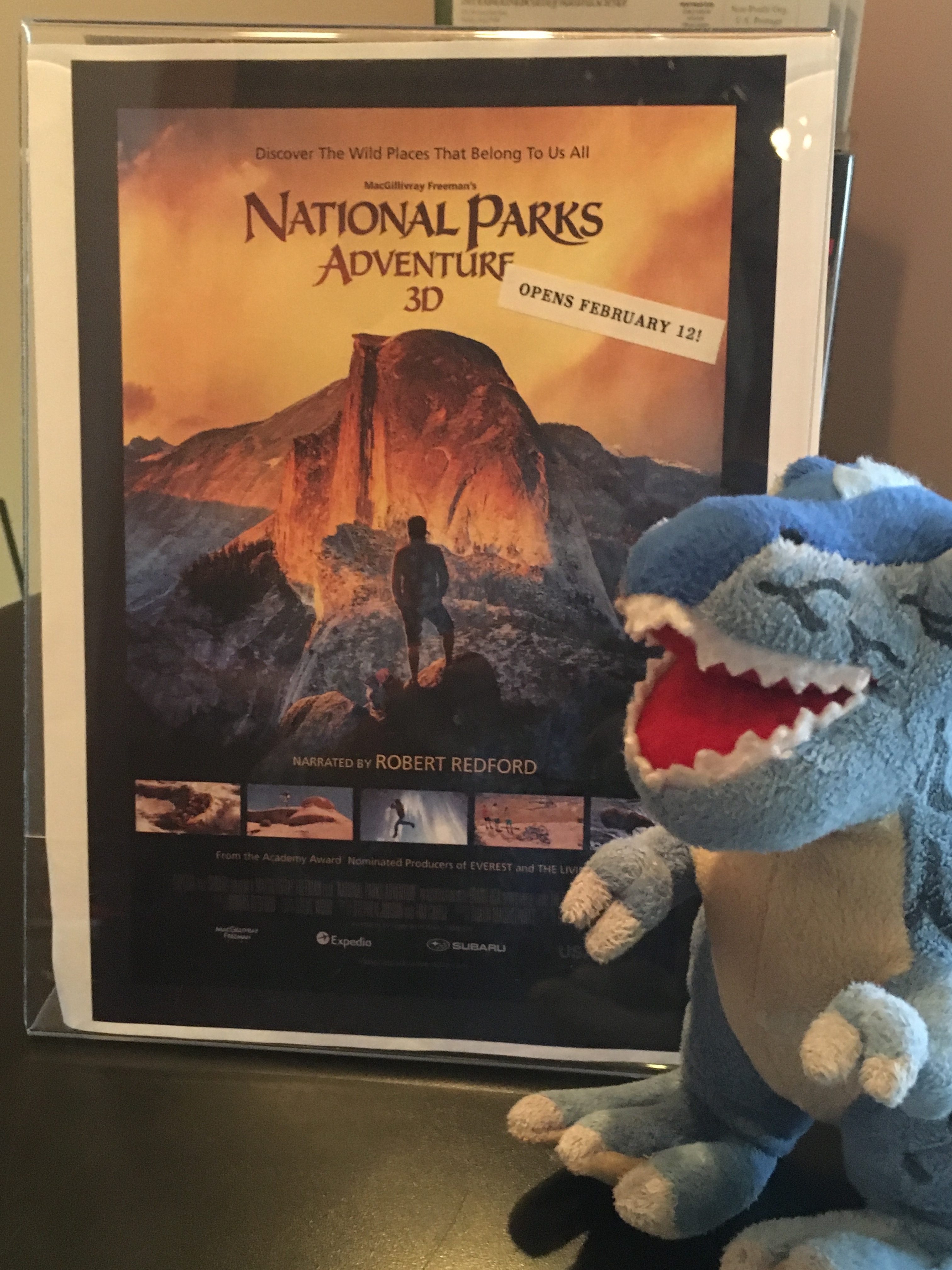 You are probably asking, “but Archie, why Big Bend?” To be honest, I was totally inspired to go WILD and visit a national park ever since I saw the new Giant Screen/IMAX film at HMNS called National Park Adventure 3D. That’s me in my 3D glasses below. Spoiler alert: this film showcases 13 of the famous parks and it has better music than what is on my playlist! 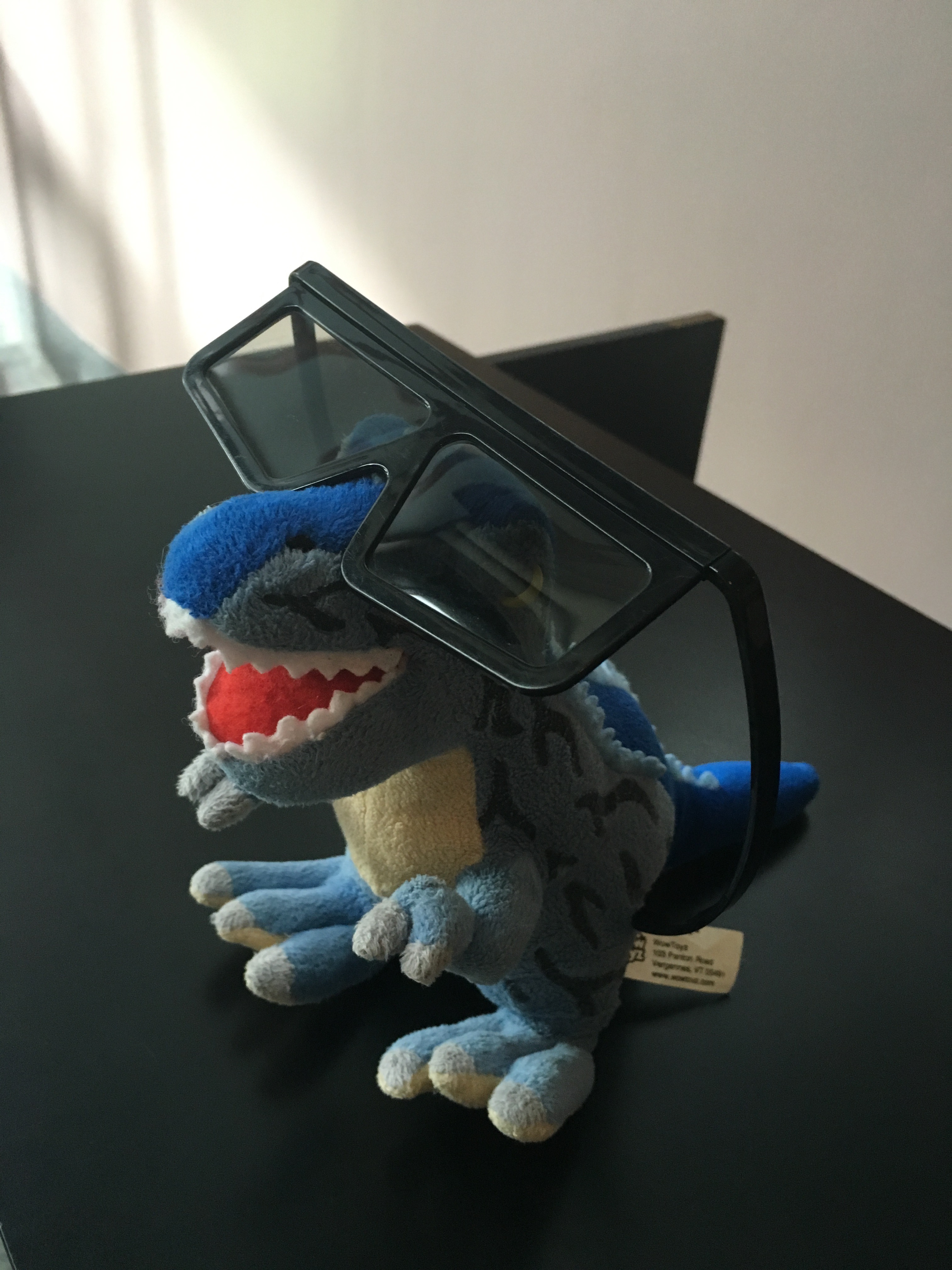 Feeling adventurous, and having learned that this year marks the 100th anniversary of the National Park system I just knew I HAD to go! How often do we get to celebrate a centennial? Do you know who is credited with this monumental feat? If you shouted to yourself, “President Teddy Roosevelt” then you would be correct! Sadly, he lost both his wife and mother on the same day but he credited his time in the wilderness as crucial to his emotional healing and thus inspired him to protect the wilderness. I LOVE being in the wild too, don’t you? 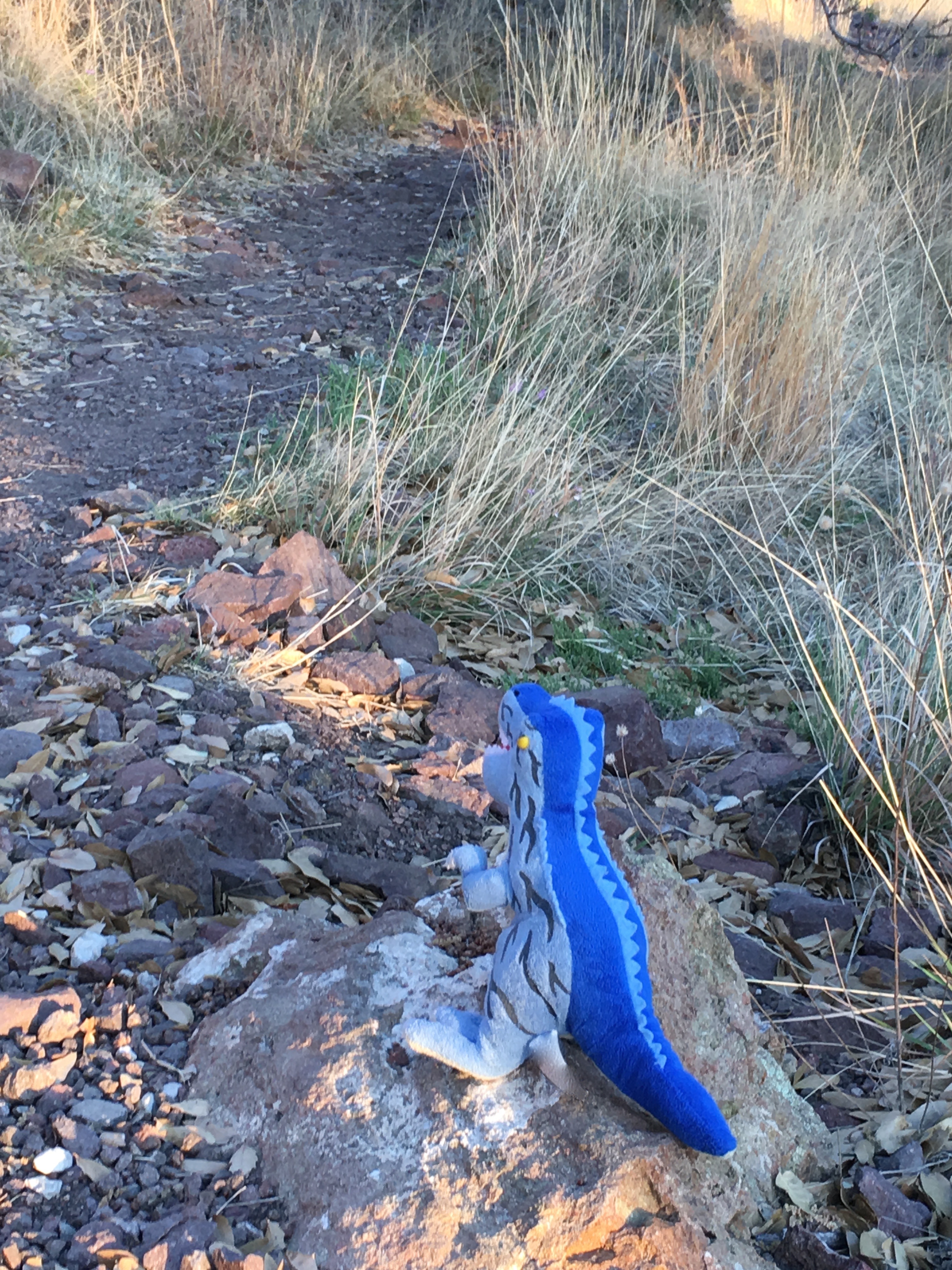 Because I didn’t want to play favorites I also ventured to Big Bend State Park. You can’t tell from this photo, but Big Bend is considered moderate-altitude (between 5,000 and 6,000 feet). I still had to catch my breath and take it slow up the trail. Remember, altitude can negatively affect those who are older and can only use half of their appendages when walking… Like moí! See, I did learn something in Paris.

As I prepared for my hike, I took a look around and remembered that Big Bend has the youngest of all Texas dinosaurs, dating to the end of the Mesozoic, 66 million years ago! I am walking in the footsteps of greatness! 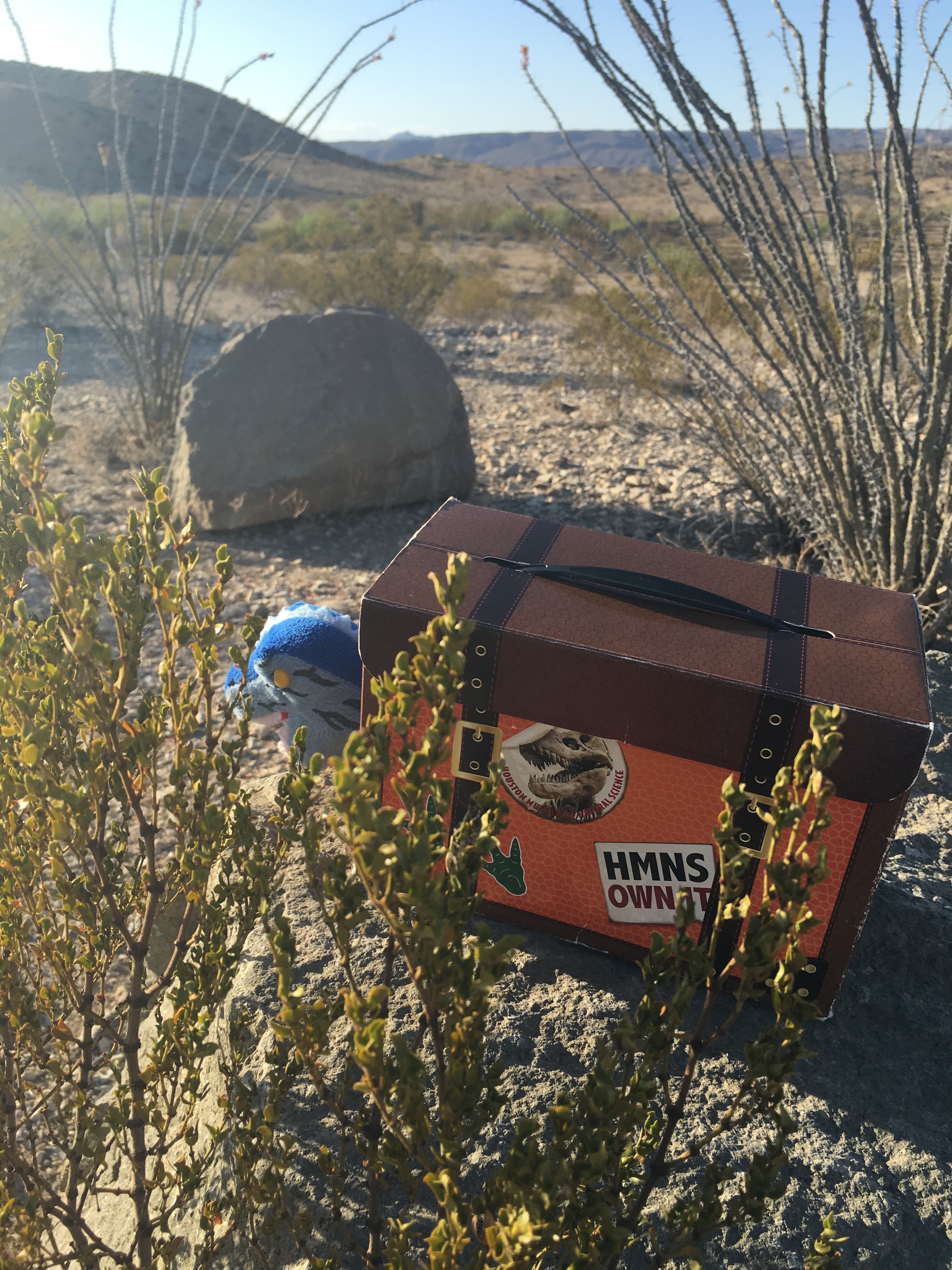 The next day was pretty hot (100 degrees, to be precise) so I decided to stay cool in my traveling suitcase as I pondered the fact that more than 90 dinosaur species, nearly 100 plant species, and more than two dozen fish, frogs, salamanders, turtles, crocodiles, lizards, and even early mammals have been discovered here. But to most of us, it’s just so darn BEAUTIFUL! 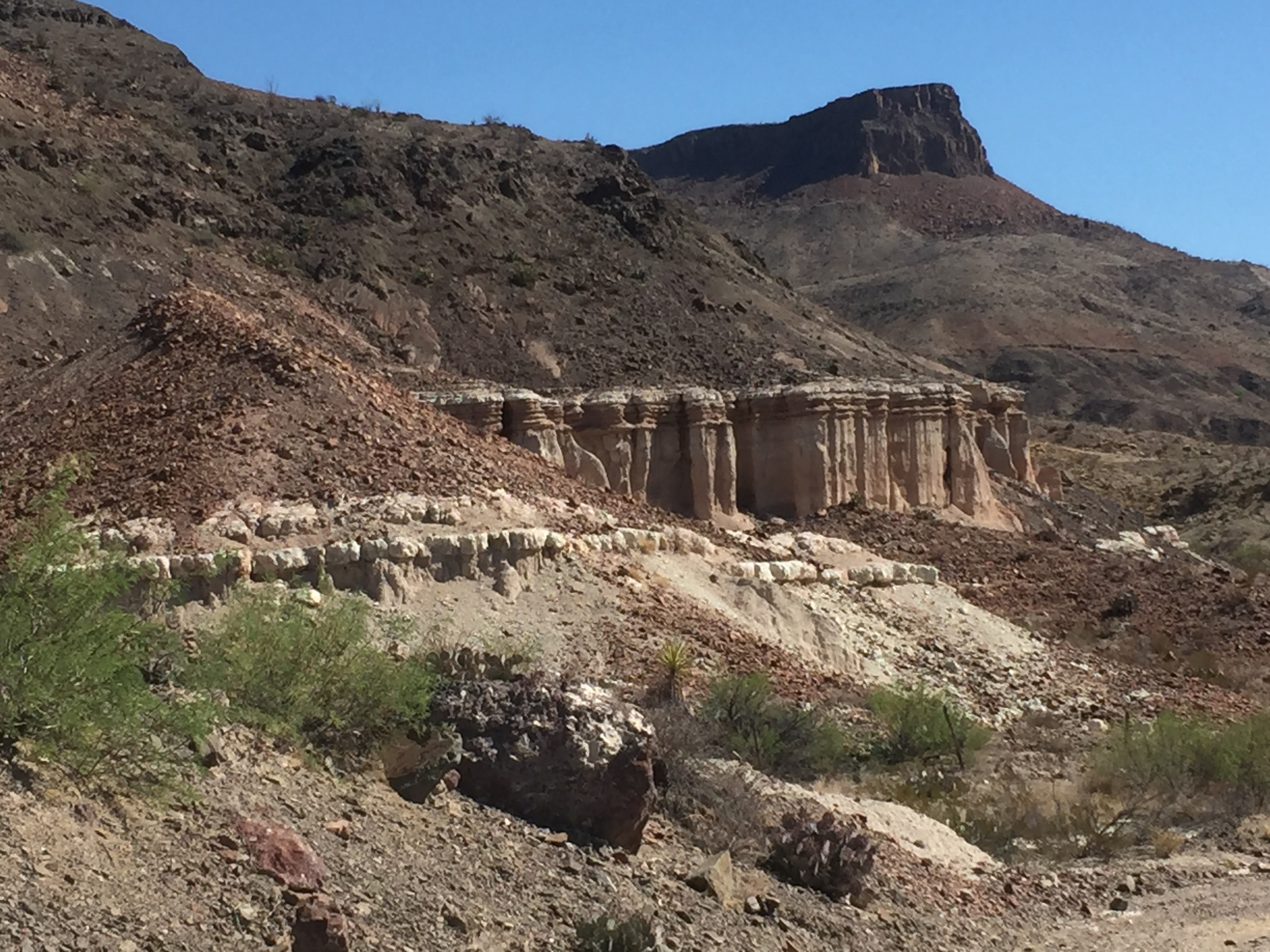 And because I’m a good steward of the environment, I didn’t pack anything extra to take home with me. It’s important to preserve all cultural and natural artifacts. So I only took photographs and left only footprints. 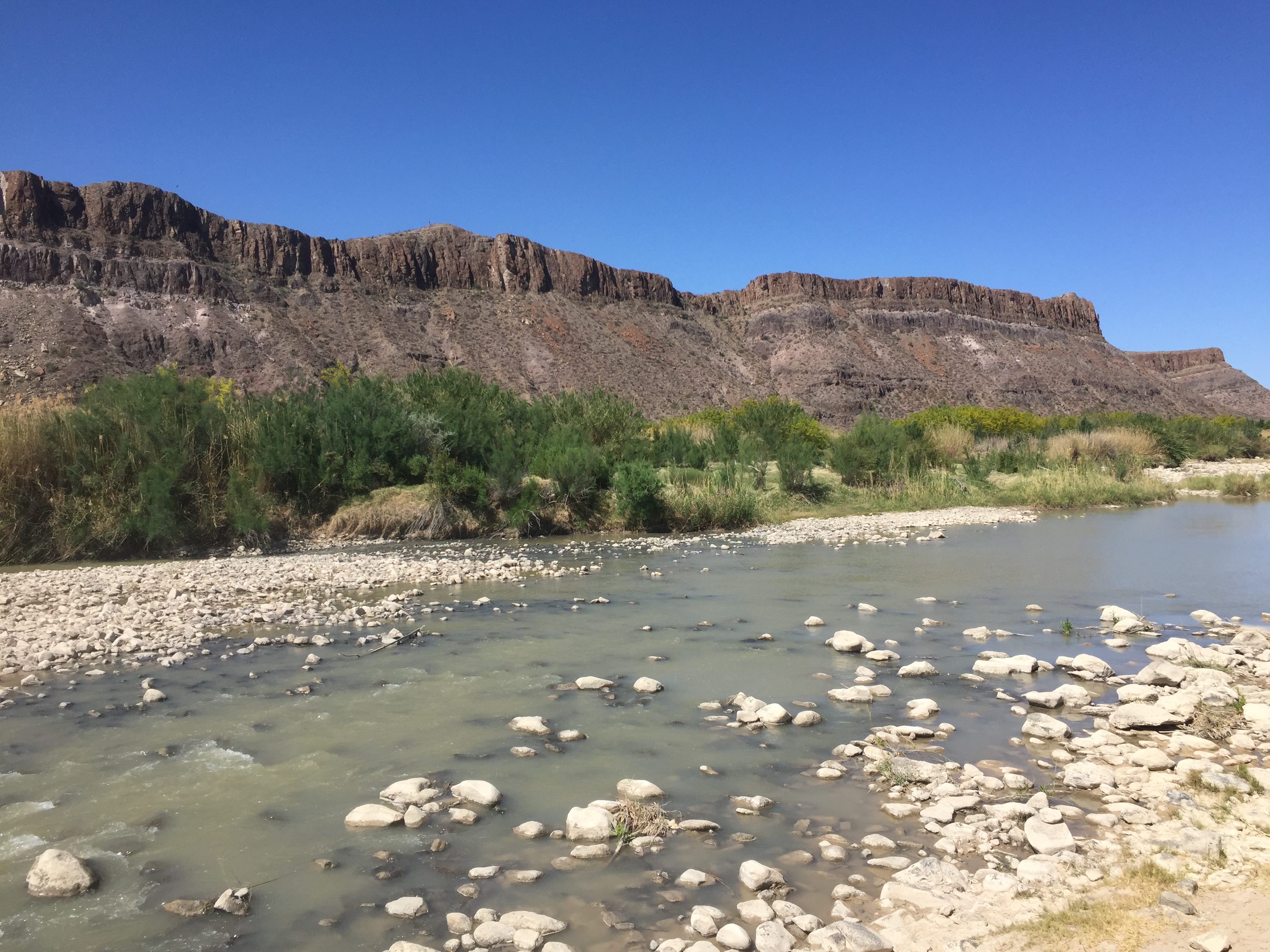 Did you know that the Rio Grande River is the international boundary (1,000 miles) between Mexico and the United States, and the “big bend” follows more than 100 miles of that boundary? In fact, the park was named after the area, which has a large bend in the river. I love learning the origins of names. Just like my name, Tyrannosaurus Rex, which comes from Greek and Latin roots that mean “tyrant lizard king.” My friends just call me T. rex, though. Or Archie. It’s less intimidating. 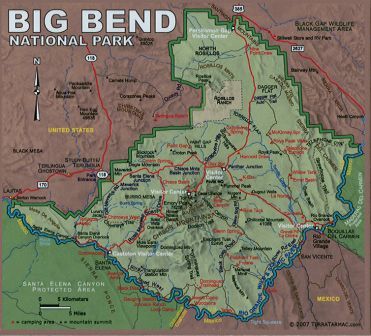 The Stars at Night are Big and Bright…

Once the sun went down, I gazed at more than 2,000 stars. Big Bend has the least light pollution of any other National Park in the lower 48 states. There’s even a song to celebrate its greatness. I also used this cool app called StarView to identify stars and planets in the night sky. Jupiter, one of the five bright planets, was indeed bright and beautiful!

I didn’t want to leave, so I promised myself I’d come back when it’s a little cooler. Shoot, I may even decide to head to the McDonald Observatory in Ft. Davis (which has nothing to do with burgers and fries). But until then, I’ll get my stargazing fix at the George Observatory in Brazos Bend State Park, another very cool place to see the stars and enjoy the natural beauty of the great state of Texas.

Editor’s Note: Charlotte is the Vice President of Film Program and Distribution for the Houston Museum of Natural Science.