When you walk through the limited engagement collection of artifacts from China’s Sanxingdui (pronounced “sahn-shing-dwee”), or “three stars mound,” you feel an immediate connection to a looming unknown. Where these artifacts were discovered is clear enough, as is when they were created, but by whom, why and how are questions still puzzling archaeologists.

The artifacts, large, strange, and beautiful, with a verdant tarnish on the ancient bronze, depict human forms with large eyes, protruding pupils, and pointed ears. If these items were a direct imitation of the people who created them, they were an odd culture indeed. 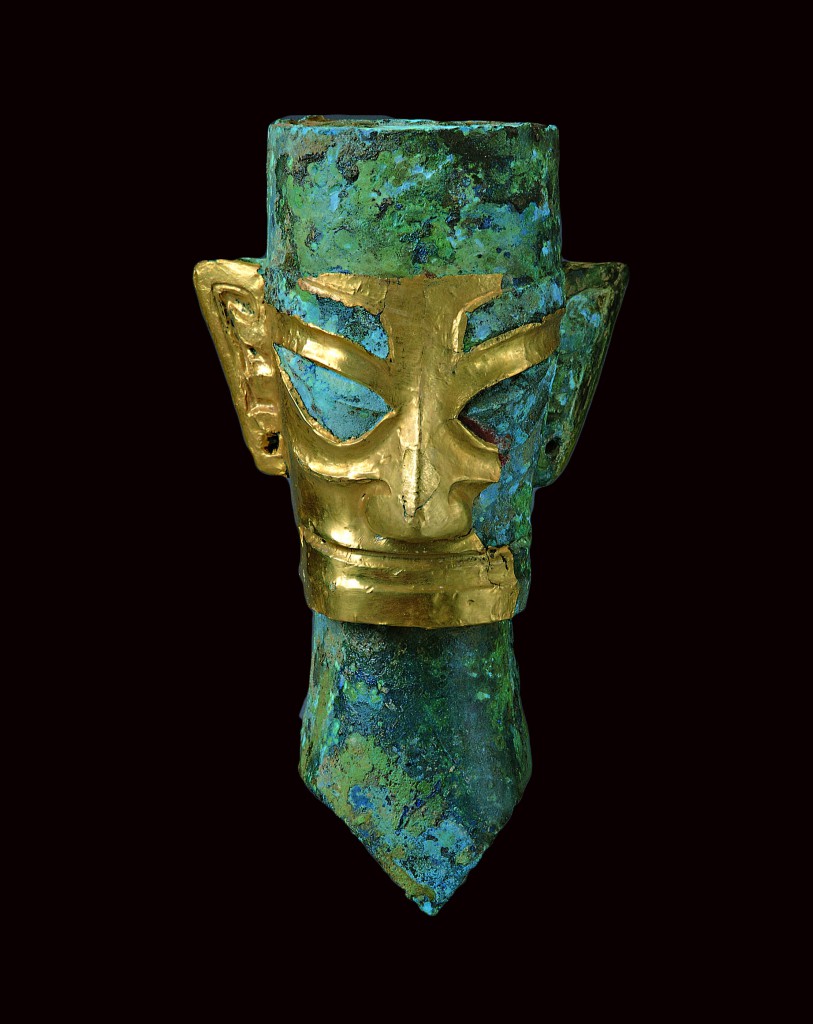 The relics were discovered in 1986 when a group of Chinese construction workers accidentally broke into the underground pit where the items had apparently been broken and dumped, yet another enigma. Were these items created with such meticulous effort sacrificed? If they were, then why? Archaeologists found a second pit nearby. Though research on artifacts from the Sanxingdui culture had continued since 1929, this monumental discovery was the find that caused historians to revise their ideas of the development of Chinese culture.

The items in both pits, Bronze Age masks, statues and charms, date back to about 1800 BC, but there is no information to reliably link Sanxingdui to the culture that existed contemporaneously in the Central Plain 1,200 miles to the northeast on the Yellow River, thought to be the birthplace of Chinese civilization. No writing was buried with the artifacts, and ancient texts make no mention of Sanxingdui.

More puzzling is the level of craftsmanship in the artifacts. The materials used to make the items reveals technology “that seems to arise out of nowhere,” to quote placard information. The Sanxingdui culture created huge figures like the eight-foot-tall statue that may depict a god or a shaman and the large masks that may have been attached to columns or walls. 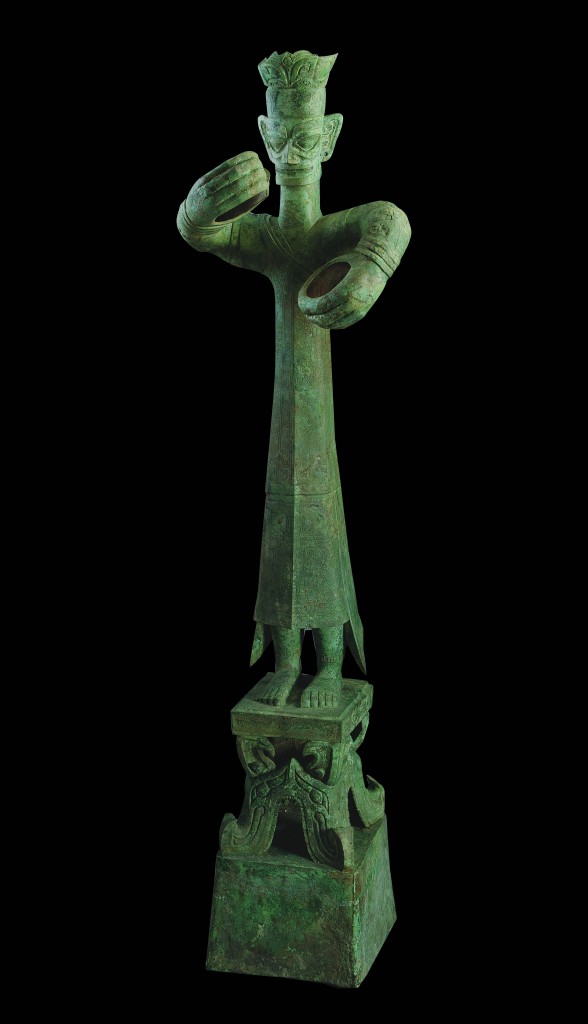 Along with their size, some of the items were created using advanced techniques such as piece mold process casting and soldering, different from those used in the Central Plain, yet no foundries have been discovered. Even if these people had the knowledge to make the bronzes, where did they get the tools to manufacture them? Stranger still, after 500 years, the culture vanished for reasons unknown.

Archaeologists discovered a few answers in 2001 at Jinsha, where they unearthed artifacts depicting the same metallurgy and conception of the human form as those at Sanxingdui. The figures from Jinsha are much smaller, but they show the same standing or kneeling postures, tight clothing, almond-shaped eyes, braided hair, and hand positioning. Radiocarbon dating found these artifacts were made 500 years after the rise of Sanxingdui. Perhaps no more than a mass migration is to account for their abrupt disappearance, but then why did they leave?

Archaeologists have concluded that the Sanxingdui culture must have existed alongside other Bronze Age cultures, trading techniques and perhaps other information. Whereas historians believed China grew from a central birthplace, the revision of history tells a story of multiple centers contributing to the development of Chinese civilization. 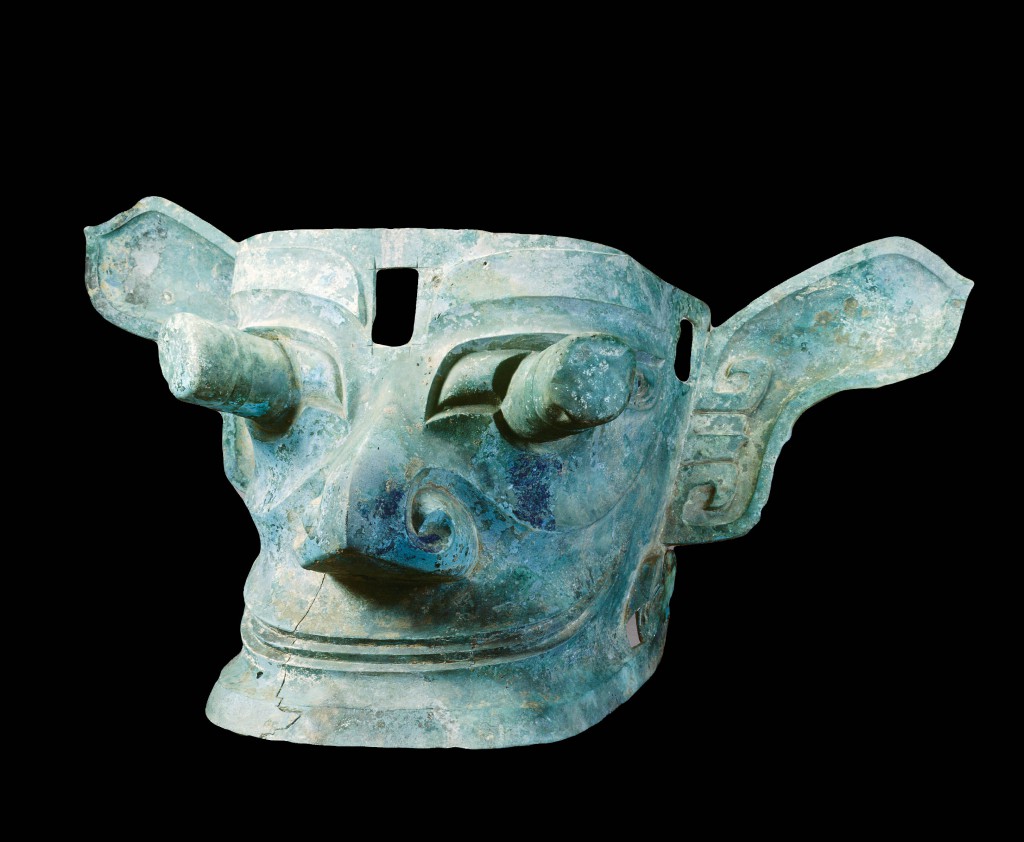 Limited Engagement: Come see the story for yourself at the Houston Museum of Natural Science. China’s Lost Civilization: The Mystery of Sanxingdui is now on exhibition through Sept. 7.

Distinguished Lecture: Dr. Liu Yang, curator of Chinese art at the Minneapolis Institute of the arts, will visit the HMNS to present “Unmasked: Mysteries of the Ancient Shu Kingdom and its Bronze Art” to shed further light on the artifacts from the Sanxingdui culture. Tuesday, June 2, 6:30 p.m.