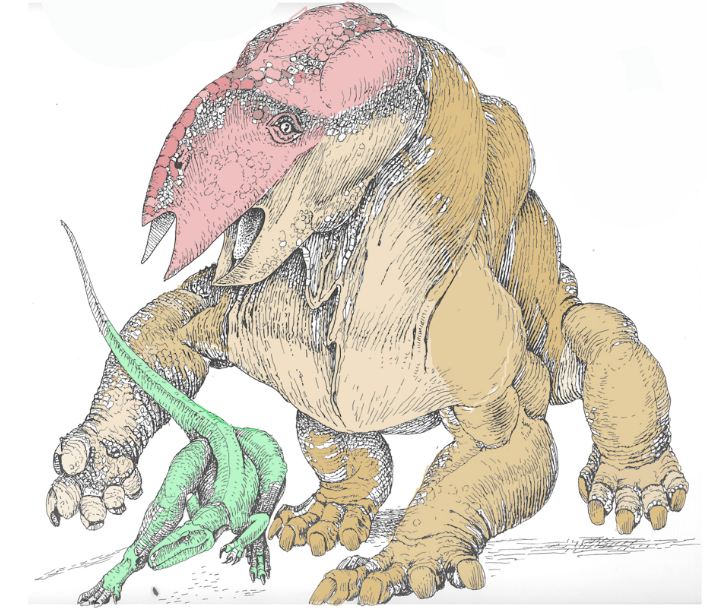 Some museums buy fossil-kits, all the bones drilled and filled with pipe fittings so that they click together to make the whole skeletal assembly. It’s quick. But if you have an anatomically sophisticated eye, and you scrutinize the kits, you’ll see serious errors of articulation as well as a general clunkiness.

For our Houston Hall (The Morian Hall of Paleontology), Pete Larson and I and Pete’s co- workers constructed every joint from scratch. We drew up dozens of pages of diagrams for shoulders and elbows, hips and knees, for every skeleton. The dinosaurs are tough but not the biggest challenge.

The Triassic Placerias, last of the big mammal-like reptiles, seemed to be a chimaera , croc-like thighs combined with the forequarters of a duck-bull platypus and the body cavity of a small ox. This barrel-chested beast took three weeks to pose in a believable full-speed run.

Here are the steps we took to capture the live beast:

A). Motion studies of extant species are reviewed to help in determining the limb posture and gait of the extinct species. In the case of Placerias the forelimb is close to that of a platypus and a terrestrial lizard, while the hindlimb is closer to that of a crocodilian and a chameleon. 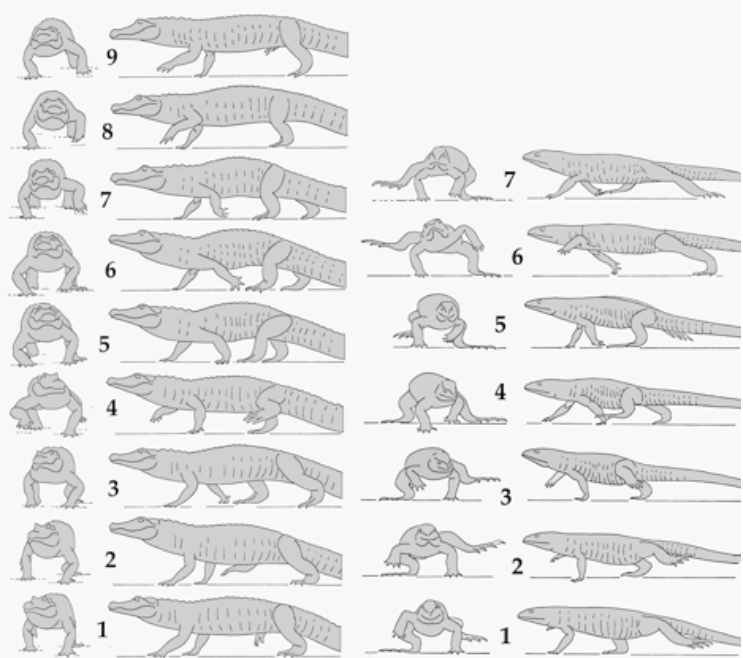 Motion studies of an Alligator mississippiensis, left, and a Tupinambis nigropunctata, right, part of the documentation for posing the HMNS Placerias and Smilosuchus.

B). The motion studies are reviewed to determine the range of lateral and vertical movement of the vertebral column, plus torsion in the extinct species. For Placerias the neck and dorsal column is compact but free to twist and flex as much in a Mississippi Alligator. 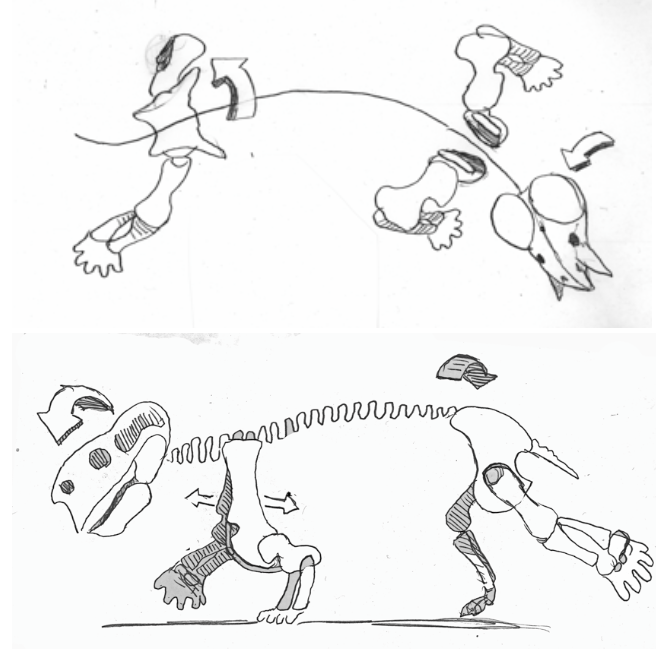 C). Placerias limb joints were like those of lizards and platypuses — motion was not simple flexion-extension in one plane, as occurs in humans, but included rotation in planes at right angles to the flexion-extension. Consequently, detailed diagrams for shoulder, elbow, hip and knee were drawn to guide the mounting process. 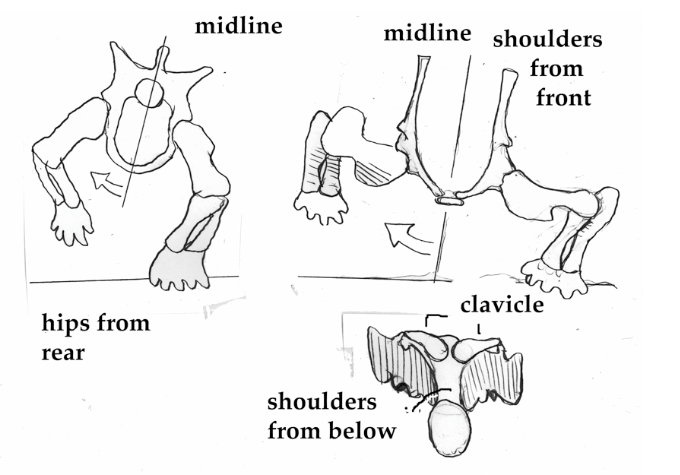 Details of how shoulders and hips, elbows and knees rotate during the restored step cycle in Placerias. 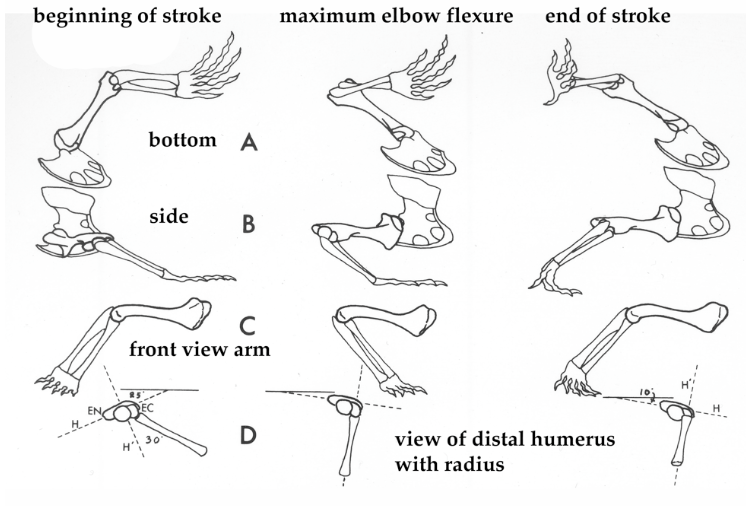 The movements at the elbow are especially complex — motion studies combined with detailed dissections of elbows of a tegu lizard, shown here, are used as a guide for Placerias.

II). The main limb and axial muscles are restored to determine which motions would be most powerful in locomotion and in combat.

A.) Our library of dissections shows which combination of extant species are most appropriate for restoring the extinct species. For Placerias, forelimb and hindlimb musculature are best reconstructed from the conditions in an echidna (Tachyglossus) or platypus (Ornithorhynchus). The reconstruction was used by the mural artist as he mapped out the body masses for the painting. 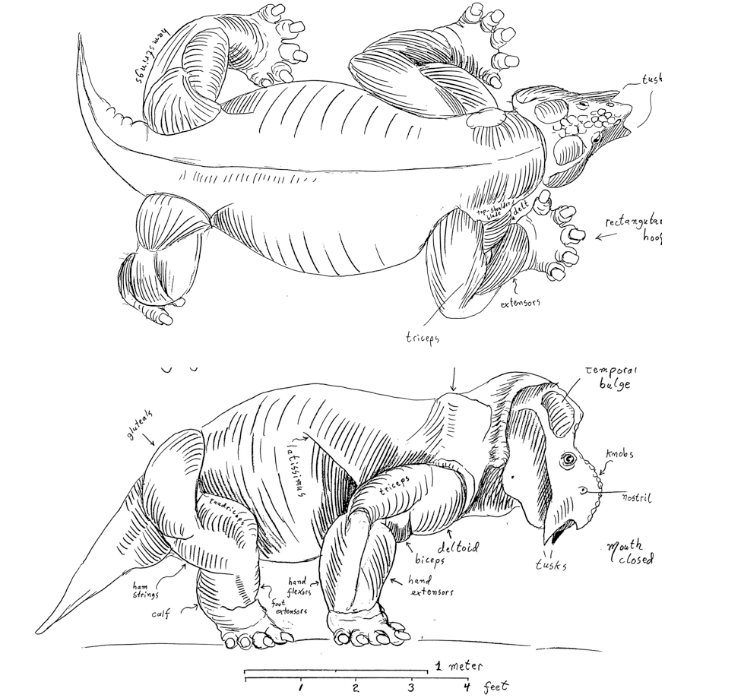 Top and side reconstruction of muscles in Placerias.

B.) The relative strength of the muscles informs our choice of posture and gait. In the case of Placerias, the domination by the forelimb suggests that the animal could dig or climb uneven ground more easily than archosaurian potential predators. 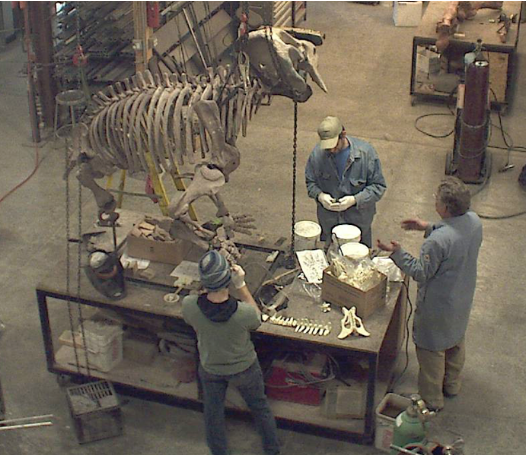 The Placerias cast being mounted at the BHIGR. Pete Larson on right.

A). A review is carried out for all the species known from the particular habitat and time, and available as skeletons. Placerias occurs in the lower Chinle Formation of Arizona. In the same beds are found three other large tetrapods that are represented by casts: 1). The large terrestrial predator Postosuchus. 2). The very large semi-aquatic predator Smilosuchus. 3). The large terrestrial armored herbivore Desmatosuchus. For the Placerias mount we chose Smilosuchus as the attacker because the body form — long snout, long, low body, long tail — made a dramatic contrast with the rotund compact design of Placerias. 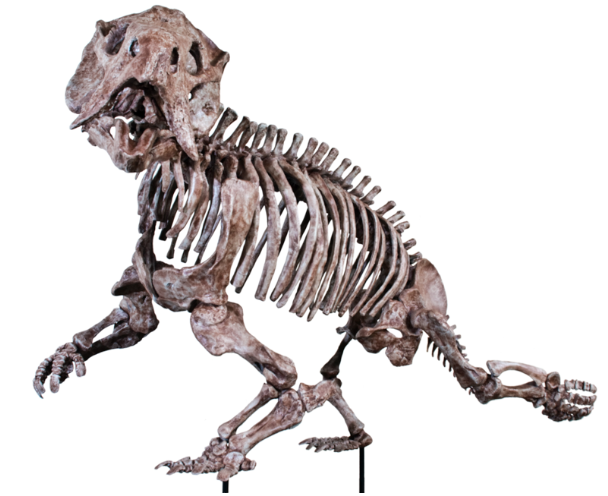 Final mount of the Placerias cast, viewed from the front.

B). Multiple sketches are generated to test various combinations of poses. The most pleasing pose for the predator-prey dyad was the Smilosuchus lunging from behind the Placerias. 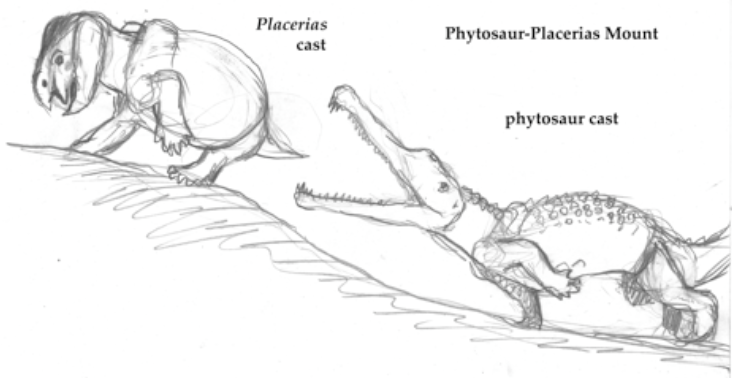 Summary: The final mounts of a Smilosuchus lunging after a Placerias were not “out of the kit” exhibits. Rather than using pre-fabricated skeletons ready to assemble, we cut apart most of the bone units and studied the range of movements indicated by the joint surfaces and by the attachment sites for major muscles. Analysis of the locomotion adaptations led to choosing posture and gait that are documented by the anatomy in the extinct animal and by study of living species which demonstrate similarities in form and function.

A Trilobite Changed My Life

A trilobite changed my life. I know what you’re thinking, “Say what? That’s just crazy!”  No, it’s true. Please let me explain. I’ve worked at the Houston Museum of Natural Science for close to half my life. Truth be told, the Museum has been a part of my life even longer than that, […]

A Study in Patience

Written by Jack Alger, HMNS Paleontology Intern This summer I bring dimetrodons back to life. No, life has not found a way, I’m not extracting DNA from inclusions found in amber; I work in the Houston Museum of Natural Science in Sugar Land. It’s a small brick building with a splendid collection of history both […]

After-hours at the Houston Museum of Natural Science on April 10, we hosted one of our exclusive Pixel Parties — where we open select exhibits just for photographers (both amateur and professional). This time around, we gave photographers access to the Morian Hall of Paleontology and Amber Secrets: Feathers from the Age of Dinosaurs. Here’s a […]

Some museums buy fossil-kits, all the bones drilled and filled with pipe fittings so that they click together to make the whole skeletal assembly. It’s quick. But if you have an anatomically sophisticated eye, and you scrutinize the kits, you’ll see serious errors of articulation as well as a general clunkiness. For our Houston Hall […]

Bust out your planners, calendars, and PDAs (if you are throwback like that), it’s time to mark your calendars for the HMNS events of this week! Film Screening & Lecture Dinosaur 13 Tuesday, December 9 6:00 p.m.Join paleontologists Peter Larson and Dr. Robert T. Bakker for a candid discussion on the discovery of Sue—the largest, […]