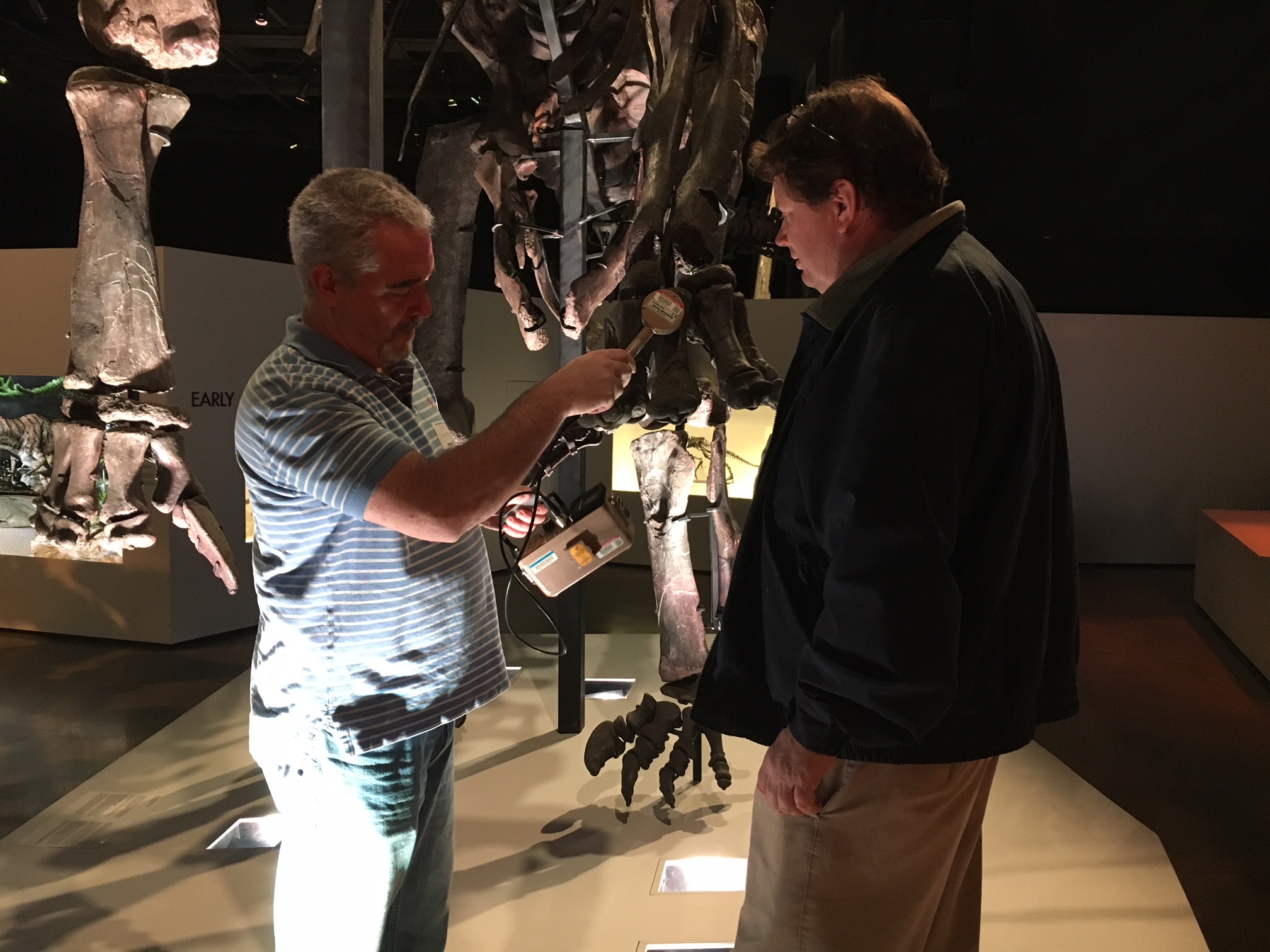 A few weeks ago I was shadowing David Temple, our Associate Curator of Paleontology, as he and a specialist from the Medical Center examined the levels of radiation given off by vintage luminescent watch dials in preparation for our new special exhibit Death by Natural Causes. After the examination was over, David decided we should go upstairs and see what would come up if we pointed the paddle of the geiger counter to some of our fossil specimens. The result was some surprisingly (well, surprising to me, at least) strong readings on some of the fossils, and basically nothing on others. The ensuing discussion inspired this blog. 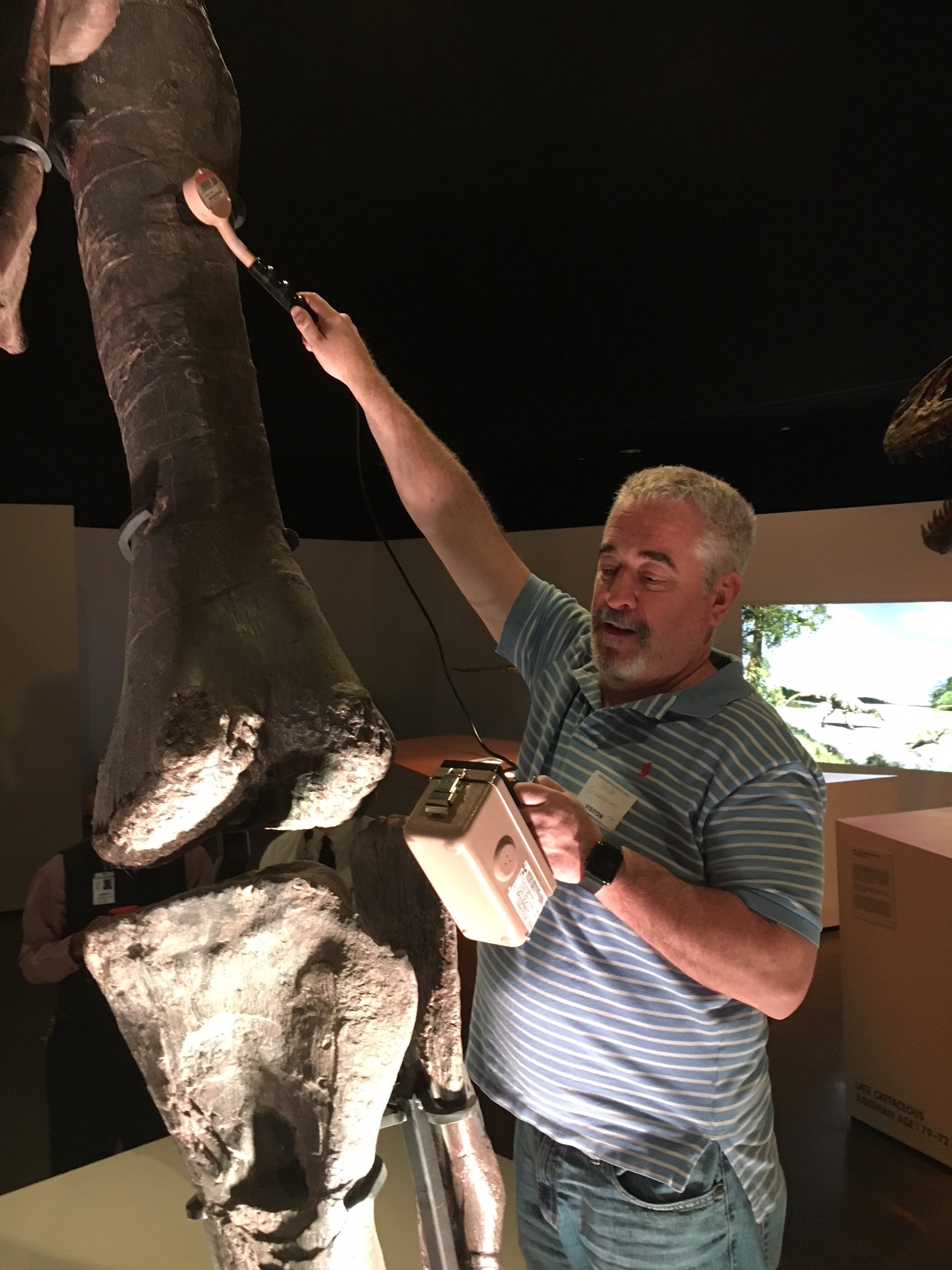 These days there are so many strange factoids emanating from dubious online and televised sources that it can be hard to tell what’s true and what’s not. One nugget of weird knowledge that I’ve had a lot of people ask me about is dinosaur fossil radioactivity. It may sound too weird to be true, but some dinosaur fossils can actually be radioactive; not enough to harm you, but enough to be picked up by a geiger counter. In fact, some can be pretty hot! But now that I’ve let you know that this crazy internet fact is actually true, it is unfortunately time for me to explain that radioactivity in fossils really isn’t anything special. 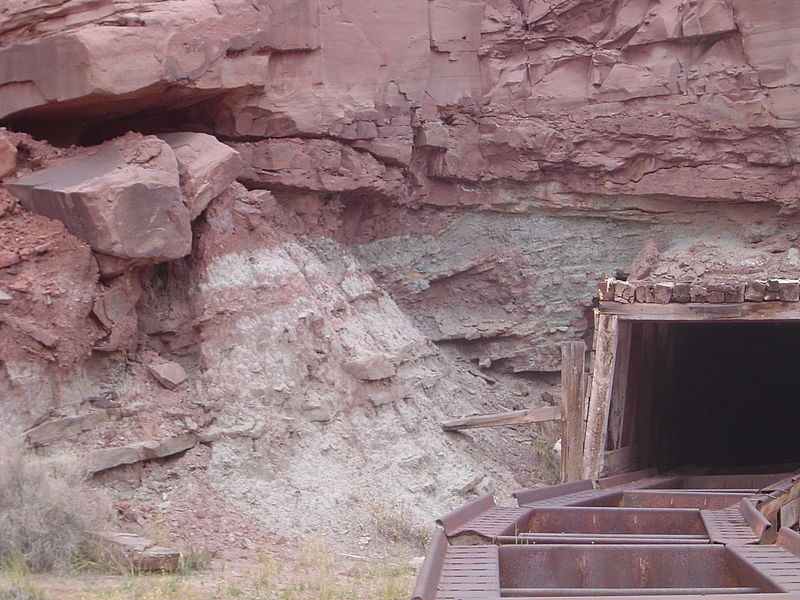 Mi Vida uranium mine near Moab, Utah. Note alternating red and white/green sandstone and mudstone. This color variation corresponds to oxidized and reduced conditions in groundwater fluid redox chemistry. The rock forms in oxidizing conditions, and starts with the red coating. It is then “bleached” to the white/green state when a reducing fluid passes through the rock. The reduced fluid can also carry Uranium-bearing minerals. Author: Matt Affolter. Source: Wikimedai Commons.

Fossilization of bones such as the big dinosaur skeletons on display in our Hall of Paleontology happens in a couple of different ways. One is the slow replacement of organic material in the bone with inorganic material from the surrounding sediment, another is the leaching of inorganic material into open paces in the bone, basically filling in open spaces with minerals, like in a geode, except on a microscopic scale. Either way, whatever minerals are in the soil at the time are incorporated into the fossil’s structure, including radioactive minerals.

Sometimes fossils can be “hotter” than the soil around them, and this has been cited by certain television programs and online resources as evidence that the radiation comes from somewhere other than the rock in which the bones were found. This has lead to all sorts of speculation about extraterrestrials and bombs. But in reality the process of fossilization tends to concentrate radioactive elements. So radioactive ash belched out by a volcano or some small amount of radioactive material transported by groundwater can find it’s was into the chemical composition of these fossils at a higher level than the soil around it. There definitely were not any paleo-interplanetary wars or alien extermination projects going on in the Mesozoic.

Radioactivity in fossils is a real thing, but it’s not anything to worry about, in fact it can help paleontologist! In some locations “hot” fossils can be located with geiger conters, saving paleontologists from weeks of digging in places that don’t yield anything. Also, radiometric dating has helped paleontologist accurately calculate the age of fossils. 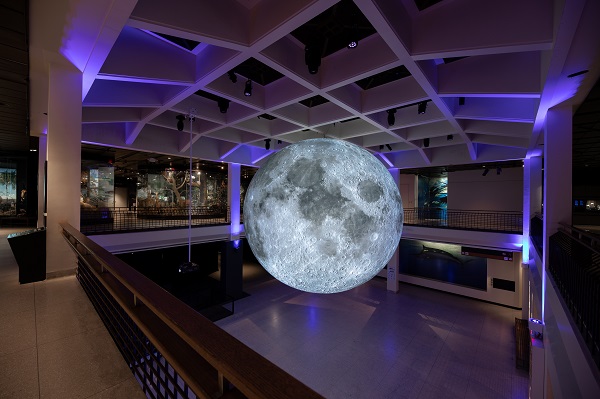