In my last blog post, I said that the Hall of Ancient Egypt would be cycling some pieces in and out in the spring. Now that the dust has settled, I should introduce one of our new arrivals. 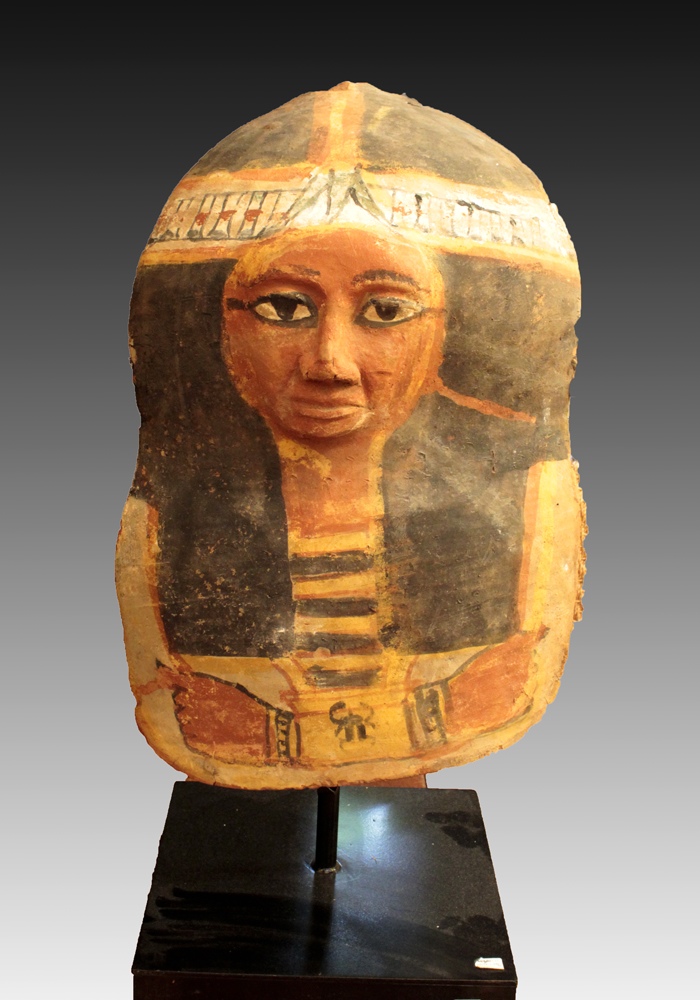 Two shadowed eyes stare out at us from a large, round face surrounded by a thick black wig with a floral headband. Around the neck, yellow and black striped bands indicate a collar. Below this, and between two crossed, clenched hands, hangs a shrine-shaped pectoral ornament with a scarab beetle.

What we have is a mask for a mummified body, designed to protect the dead person and represent him or her as a successfully transformed spirit. Tutankhamun’s gold mask is the best known example, and ours conforms to the basic pattern. And yet it looks… different. Why?

One clue lies in the material. Instead of gold, stone, or wood, our face is made from modeled and fired clay and comes from a rare (and relatively little-studied) group of objects archaeologists call slipper coffins.

These are essentially clay capsules made large enough to contain a wrapped human body. The headpiece is cut out of the capsule while the clay is soft, and the face modeled. The capsule is fired and sometimes painted. The mummified body is slid in — like a foot into a slipper, hence the name — through the hole, the face-plate is replaced, and the filled coffin buried. 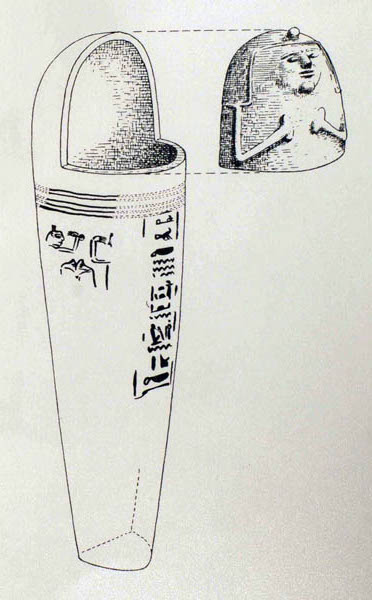 Diagram of a slipper coffin.

Pottery slipper coffins are known from the New Kingdom onward in Egypt, and from the late Bronze Age (about 1300 B.C.) in Syria-Palestine. Other examples turn up farther east, in what is now Iraq and Iran, from around 200 B.C. onward. These are especially slipper-like. 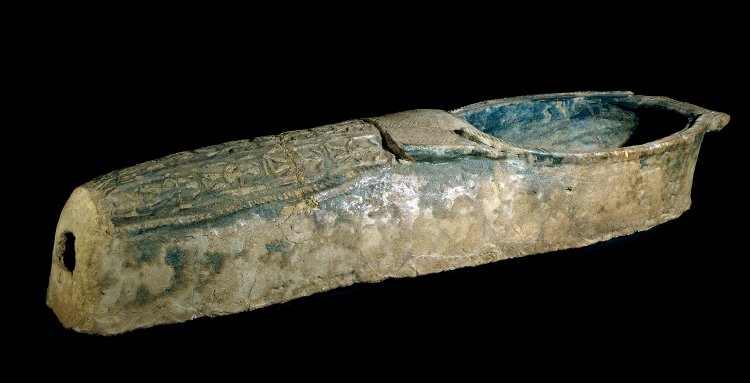 The occurrence of pottery slipper coffins outside Egypt has led some people to view them as a marker of ethnic identity. They have been associated with non-Egyptians living in Egypt, but the evidence does not fully support this: our face-plate is entirely Egyptian in style, and other coffins are carefully inscribed with hieroglyphs. Whoever was buried in our slipper coffin identified as Egyptian.

Slipper coffins are known from sites all over the Egyptian world, from the Delta to Nubia, but I don’t know of any from Saqqara or from Thebes/Luxor, the most important cities of New Kingdom Egypt. Because of this, and the often rather homely appearance of the face-plates, people often say that slipper coffins are an inferior, cheaper substitute for more usual wooden coffins. I’m not so sure. It’s hard to quantify the cost of making, firing, and painting a slipper coffin as opposed to carpentering and painting a wooden one, but the skill needed to make a life-size clay coffin and successfully fire it is considerable, and that’s before we even try to take into account the amount of fuel needed for the firing, and its cost. Our face-plate was painted both before and after firing: the yellow, brown and black pigments were applied when the clay was still wet, while the white, blue, red and green colors on the headband were applied after firing. All in all, the face-plate is a sophisticated piece of craftsmanship.

I’ve been careful not to assign a gender to the face-plate in this blog post. When I wrote the label for the case, I identified it as representing a woman. The floral band around her head was, I thought, exclusive to women; and there was something about her face that made her look like everyone’s blousy aunt. However, a friend pointed out that men too can have flowers in their hair, like this example in Brussels 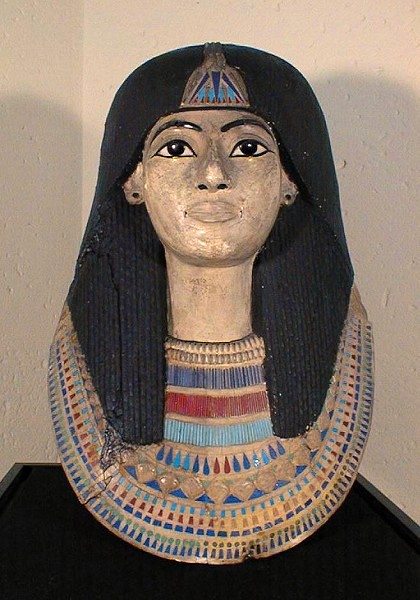 So the jury’s still out. Man or woman, though, the slipper coffin’s owner made the most of his (or her) opportunities to be buried in style.

Previous Post
Archie Spends 'A Day in the Life' of a Museum Volunteer
Next Post
Mark Your Calendars for these events happening at HMNS 7/18-7/24
Become A Member Support The Museum + Benefits Vist HMNS.org
Editor's Picks The Real Moon Hoax That You Haven’t Heard Of Is Darwin relevant today? Oh The Hermannity! The Story of Houston’s Most Beautiful Green Space A Few Member Benefits Most HMNS Members Don’t Know About What The Loss Of The Museu Nacional in Rio de Janeiro’s Collections Means To The World What Is The Deal With Brontosaurus?!