In 1972, mammalogist Ralph Wetzel and colleagues were studying armadillo ectoparasites in the Paraguayan Chaco when they came upon a peccary (what we call javelina in Texas) that didn’t look like those already known to science. The result was Catagonus wagneri – the Chacoan peccary, known only from a fossil discovered in 1930 by Argentinian paleontologist Rusconi. During the next two decades following this discovery, a cadre of various scientists ventured to Paraguay to learn everything they could about this rare living fossil. Some such as Jon Mayer and Phil Brandt went on to other careers, while others such as noted peccary biologist Lyle Sowls have passed on. 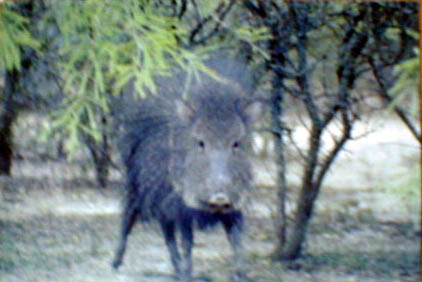 I was fortunate in being the youngest of this earlier wave of scientists. In 2008, for my first blog ever for BEYONDbones, I wrote about my experience in the Paraguayan Chaco, fresh out of undergraduate training. Here is the part relevant to today’s blog, taken directly from the Introduction of the 2008 blog:

“I spent 1989-1990 studying a semi-captive baited herd of Chacoan peccaries (Catagonus wagneri), an endangered medium-sized mammal endemic to the Chaco biome of central South America; taguá is the Guaraní Indian word for this distant relative of the pig sub-order. They are extremely rare, and very few people ever see a live one in the wild. Writing this piece takes me back to a time when I accomplished a lot by knowing very little. Only in my early 20s, I did a lot of growing up during my stint in the Chaco – hot water, electricity, air-conditioning, phones, TVs, stereos, etc. were nonexistent in my life, but the fauna was diverse and abundant, and the studies I was able to accomplish during my time there paved way for a lifetime of disciplined work.”

In early February 2016, I received an invitation to attend an international workshop in Asunción (Paraguay’s capital) dedicated to creating an action plan for the taguá. I received this with very mixed feelings, having not worked intensively with taguá for nearly three decades since I was very young and very green. I contacted the workshop coordinator to express my concern, and she gently and politely let me know that it was her hopes to get all the taguá biologists, present and past, together in one room, where the young could learn from the older and vice-versa. After figuring out how to get to the meeting and get the necessary blessings and permissions, I was holding plane tickets to return to Paraguay…

When I first went to Paraguay in the late 1980s to work with taguá, barely a handful of people were interested in this endangered species, let alone conserving them. I was truly heartened to see that has changed at this workshop!  All the necessary stakeholders were represented at the meeting – not just scientists, but also indigenous Guaraní who depend on taguá for protein and the hide for other uses. Landowners and administrators who advise ranchers on integrating wildlife and ranching were present, including representatives from the Mennonite colonies (Mennonites occupy a good chunk of the range where taguá occur in Paraguay) and important government officials including the heads of National Parks for certain states. 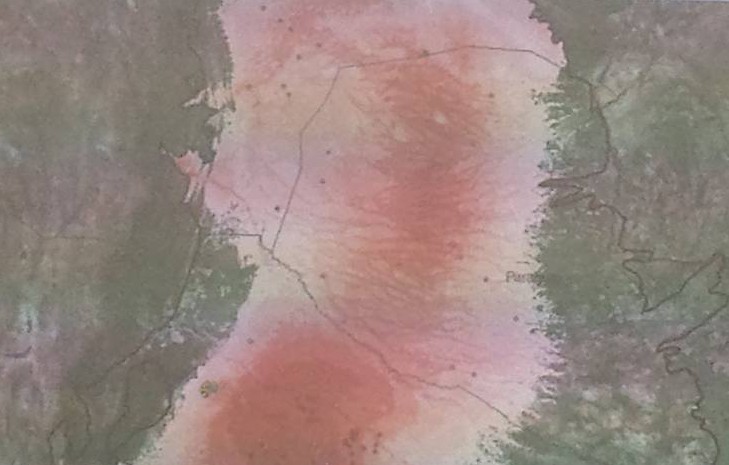 Geographic range of the Taguá in the Chaco of Bolivia, Paraguay and Argentina.

In total there more than 30 representatives from the range of the taguá (Argentina, Paraguay and Bolivia) as well as a few biologists from other countries who met from late February to early March for a week of intensive meetings. On the first day of the meeting, the taguá biologists worked on reviewing the taguá’s status and distribution, and generating a population viability and habitat suitability analysis (PVHA) using a computer modeling program called Vortex. Various life history parameters from data I collected as a youth were entered into the computer program, and it spat out the number of individuals necessary to conserve the taguá well into the future. 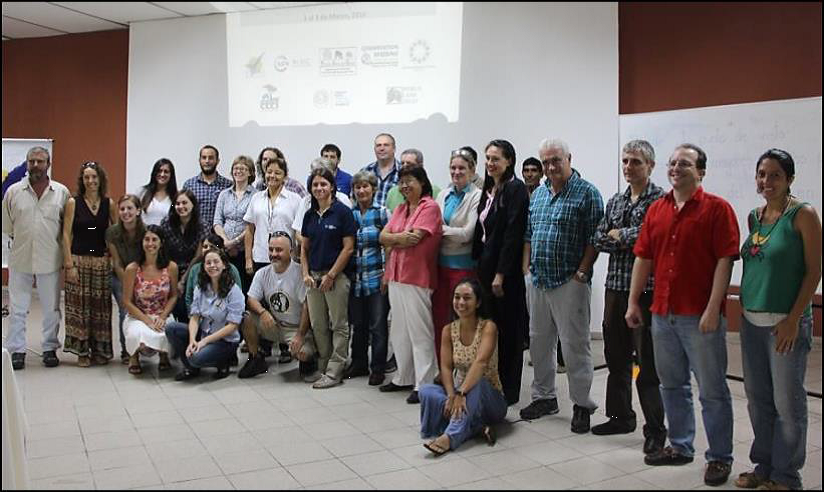 During the remaining three days, participants worked on identifying a vision for the action plan based on the main primary threats to the taguá. Participants were separated into three break-out working groups (habitat loss, hunting, lack of knowledge) to determine isolating problems and goals and actions that address the main threats to the taguá. The latter group (lack of knowledge) also worked on identifying potential roles for captive breeding programs. Additionally, a network of committed professionals and institutions was created to put the recommendations and priority actions into practice. 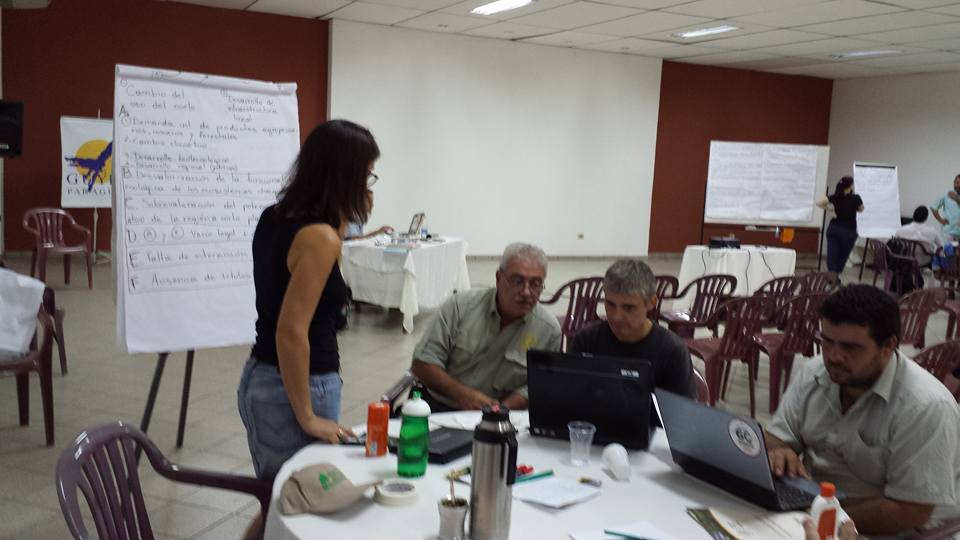 I think everyone enjoyed getting to work with other like-minded people toward a common goal. It was a lot of fun reuniting with old friends after so many years, as well as building new friendships. Hopefully, the governments of Argentina, Paraguay and Bolivia will incorporate the action plan into their respective conservation planning.

Today, Juan Campos is the director of the project I worked on so many years ago. The project’s name has been changed to CCCI/Proyecto Taguá (translated: Chaco Center for Conservation and Investigations/The Taguá Project). Juan is a true gentleman and is doing some outstanding work!  We are currently making plans to collaborate on various projects. 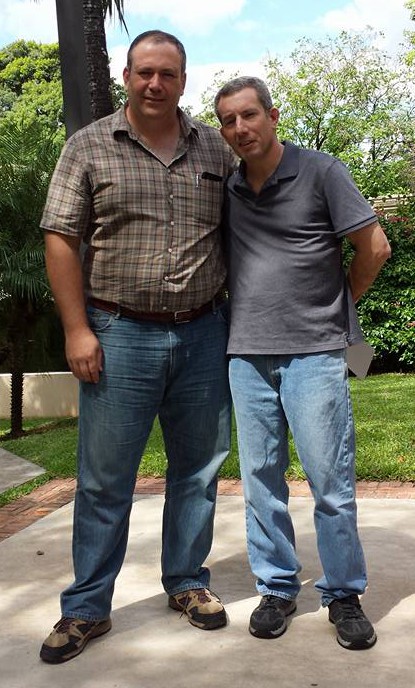 Juan Campos, left, with a current version of yours truly. 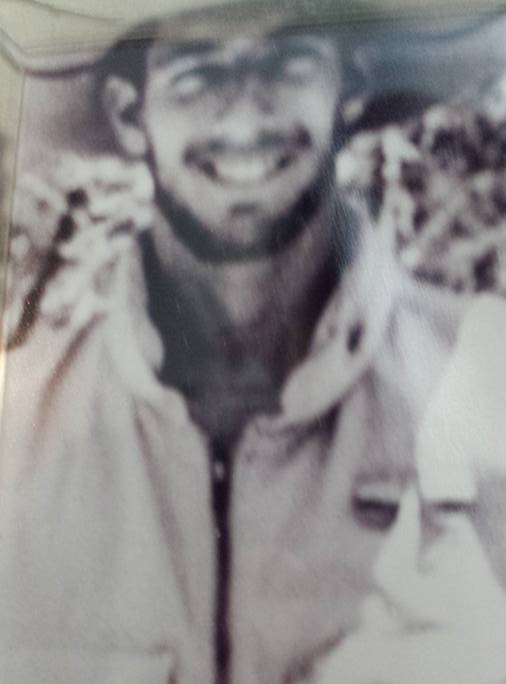 The man who initially sent me to Paraguay was Dr. Kurt Benirschke, who was one of the originators of the concept of breeding endangered species in captivity as a conservation tool. He is also the father of former San Diego Charger’s star kicker, Rolf Benirschke! Kurt instilled some great concepts in me at a very young age, like the one and only medicine you need in life is hard work. He used to tell wonderful stories of wildlife encounters he had in Paraguay and other areas. I remember on one such occasion he was telling me that just 25 years ago (some time around 1964), massive woolly spider monkeys or muriquis (Brachyteles arachnoides) lived in the tri-country region of I’guasu, but sadly the species had gone extinct. One of the most funny, yet very real and bittersweet moments of the week involved some storytelling of my own. Some of the younger biologists, newer yet already very experienced with Paraguay’s wildlife, were lamenting that black howler monkeys (Alouatta caraya) were now becoming extremely rare in Paraguay. I told them they were mistaken, since I remembered them from when I lived in Paraguay just 27 years ago. They were extremely common, even in the neighborhoods of Asunción, where it was possible to see them using utility lines to get around! My new, younger friends looked at each other with shock, then looked at me with suspicion, and cautiously informed me that howler monkeys disappeared from Asunción many years ago. Saddened by this, I realized that things had come full circle – another fantastic, large and charismatic vertebrate had become locally extinct in another span of roughly 25 years. Hopefully it won’t be too late for the taguá…

Previous Post The Adventures of Archie the Wandering T. rex: France
Next Post Spectrum of Birthdays: HMNS Celebrates in Any Tradition!