There was a Veggie-saur revolution at the start of the Cretaceous Period — did it cause flowers to appear? 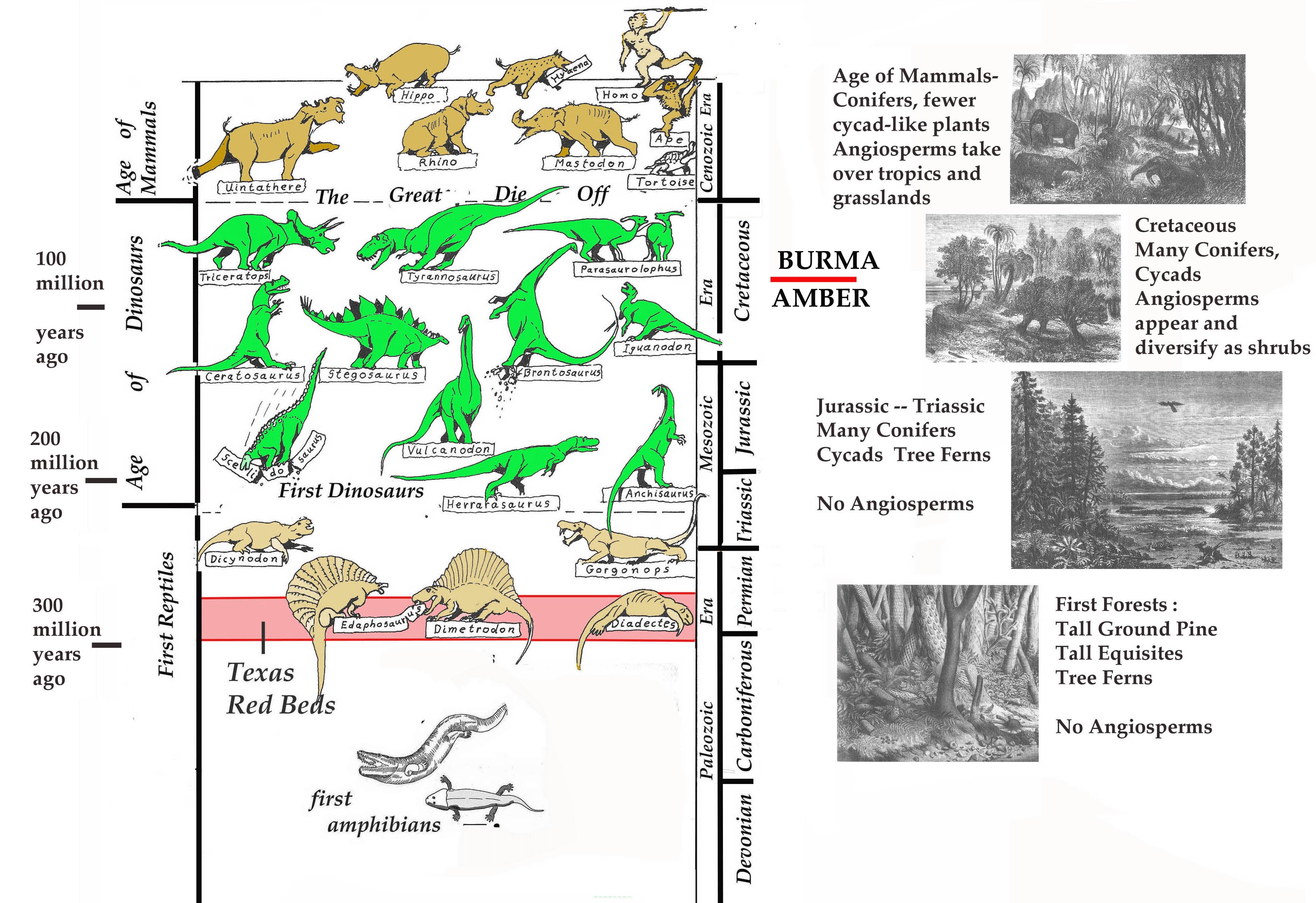 Brief History of Land Plants and Critters Who Ate Them

In today’s world, on dry land, flowering plants — aka angiosperms — are the Number 1   Ruling Class of vegetation. In the tropical rain forests, where plant species are the most diverse, just about all the trees are flowering plants. And so are most of the shrubs and vines and low-growing herbs, plus all the grasses too. The non-flowering plants with seeds, the gymnosperms, do include some famous species. The needle-leaved conifer trees, like pines and cedars and noble redwoods of California, win fame as
the tallest gymnosperms. And best-looking too. In addition, gymnosperms can boast of cycads, with their super-stiff palm-style leaves, and the ginkos, whose graceful leaves ornament many a college street. (But don’t step on the fruit — its stink is so bad that many a town has banished the female trees, leaving only the odor-free males to line the sidewalks).

But compared to the angiosperms, the gymnos are secondary players who do very well only in odd habitats, like dry, sandy soil or frigidly cold northern forests.

Don’t think it’s always been that way. If you time-traveled back to the Jurassic, you’d see no angiosperms at all. Nada. Nyet. Neither trees nor shrubs nor grass. Stegosaurus and Brontosaurus looked out on a dull green landscape without any brightly colored flowers. Jurassic woodlands had magnificent groves of conifers mingled with some stately tall cycads and a surprising array of ginkos. But no plants with flowers. We get the very first
fossil hints of flowering plants early in the Cretaceous: some pollen grains, some leaves, even some flower parts, most very small. Then, as we go later and later in the Cretaceous sediments, we see the angiosperms proliferating in variety and expanding in numbers. By the late Late Cretaceous, the great herbivorous dinos like Ankylosaurus and Triceratops cavorted among a kaleidoscope of brilliant spring flowers.

What released the evolutionary potential of the angios?

Bugs must take a lot of the credit. Most gymnosperms reproduce pinestyle — they rely on the wind to spread pollen from tree to tree. Early angiosperms could spread their pollen by hitchhiking on bug backs and bug snouts. Flowers are devices to seduce insects with the promise of yummy free meals. The aroma of flowers brings in flying critters who enjoy the repast and then fly away, carrying a load of pollen to fertilize the next 2 plant. So, bug pollinators are especially important to plants which have their populations in patches, spread far and wide.

Speaking of patchiness, when angiosperms first appeared they were NOT tall, stately trees. Nope. The Ur-Angiosperms were aggressive opportunists, scraggly little botanical carpet-baggers. If there were a movie of the first angiosperm he’d be played by Danny DiVito. These devious plants waited until disaster struck and they moved into disturbed
neighborhoods, places where the native gymnosperm vegetation had been washed away by storms or blasted by wind, or buried in layers of mud. The invading angios had just the right adaptive equipment to exploit blighted habitats. Their seeds spread easily and sprouted fast. The young sprouts grew like weeds — well, in fact, they were weeds, weedy bushes and other plants of low stature. So the angios could fill holes blasted into the
botanical architecture completely and quickly.

For the Early Cretaceous angios, it was an unsettled life. In each disturbed patch, eventually, the slower-growing gymnosperm plants might re-invade and work their way back into the land taken over by the flowering plants. But that was ok. New disaster areas always opened up somewhere else and the angios would do their thing again. Of course, every time, the bug connection was a big help in letting the angios reproduce and share genes all over the new patches of habitat. But wait……….there’s another animal-plant connection that was working to help the early flowering plants. Not tweensy bug-oids but gargantuan plant-eaters.

If you are reading these lines and are a game ranger from one of the great African parks you’d be yelling “You forgot over-grazing! Over-browsing! Elephants, rhinos, Cape Buffalo! 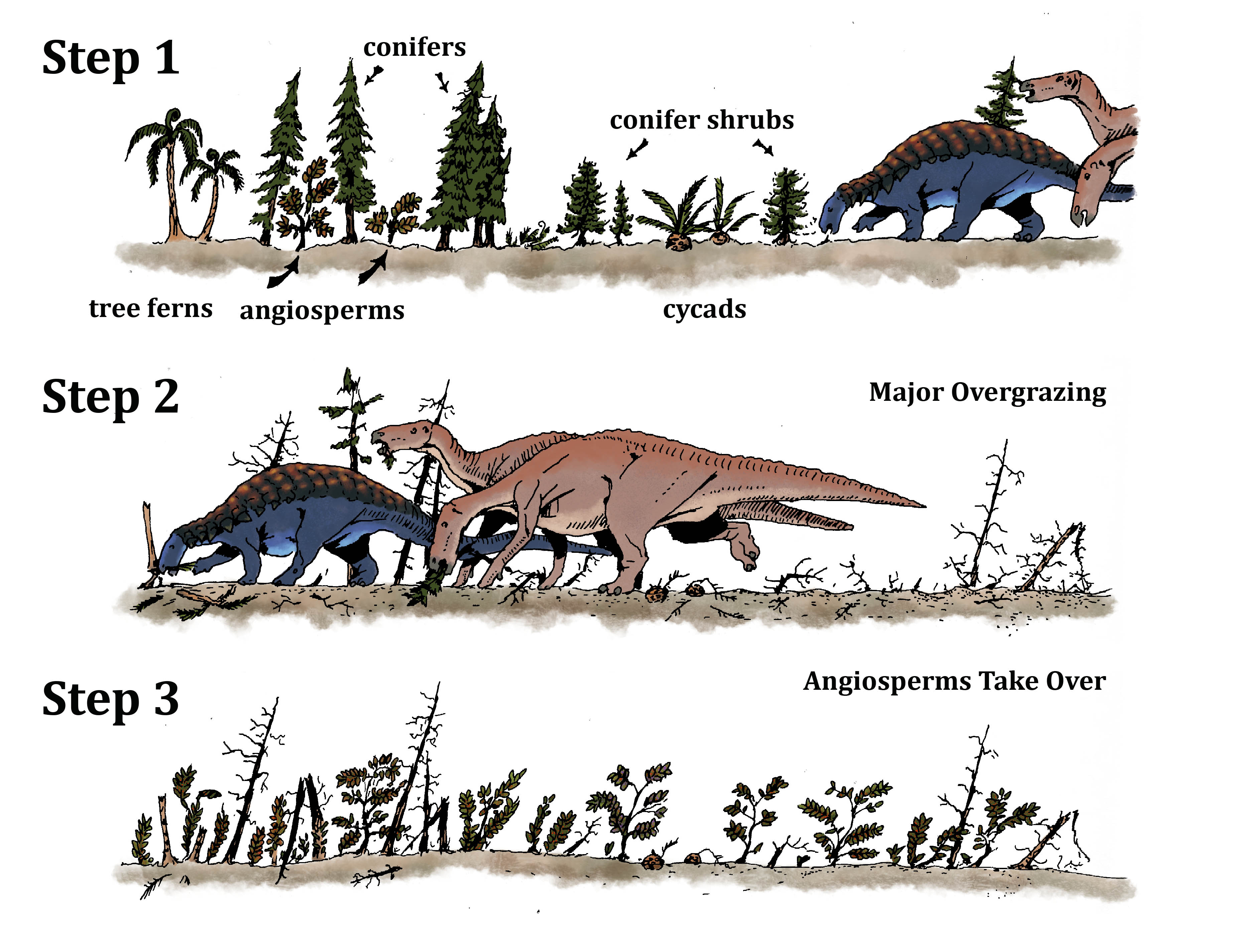 How to overgraze an Early Cretaceous Woodland and Open Patches for Angiosperms.

You see, for clearing out vegetation, big herbivores can be far worse than floods and storms. A herd of multiton pachyderms can function as grazers, eating all the grass and other low-growing greenery, and as browsers, picking out the fruit and branches and leaves of shrubs and saplings. And then, when they’re done, really big, elephant-sized plant-eaters knock down the trees and eat the plant parts on tree tops. Before they were badly poached, white rhinos and black rhinos did a job on many local African habitats, assisted by huge herds of Cape Buffalo. When elephant populations exploded in Amboseli Park, the lush forest was transformed into a dry forest which was transformed into a blighted woodland with denuded soil.

In the American West, unscrupulous absentee owners sometimes cram far too many cows into an area where luxuriant bushes line the creeks and edges of ponds. Soon all the underbrush is gone and so is the grass.

A plague of beefy herbivores, herefords or buffalo, opens the way for unwanted weeds — in my native Texas, mesquite, cedar, and prickly pear. With over-grazing and over-browsing in mind, we should check out the veggie-saurs of the Jurassic and Cretaceous. And when we do, we see an extraordinary re-structuring of giant vegetarians.

The Jurassic might be called the “Giraffa-zoic” because, on average, the big plant-eaters were tall to very tall to unbelievably tall. Long-necked brontosaurians like Brachiosaurus could reach up twenty five feet or more into the tree tops. Their distant cousins, the Diplodocus clan, not only had long necks but also had immensely strong and heavy rumps and thighs so they could rear up and choose among the most tasty branches and leaves in the tree tops. These long-necks reached the body weight of a half dozen
bull elephants — 50 tons or more.

In the same Jurassic habitats, stegosaurs fed in and around the long-necked herds. Though they had necks of only modest length, the stegos could rear up, so their browsing could sample plants at fifteen feet above the ground.

All these high-browsers could search low-growing plants as well. That way the feeding pressure on the plant community was spread over an extraordinarily wide vertical range, from zero to forty feet. Specialized ground feeders were rare and not very big in Jurassic times. Some armorplated dinos, the ankylosaurians, carried their heads low all the time but rarely exceeded a ton in weight. Camptosaurs, primitive relatives of duck-bill dinos, were roughly pony-size in body build. The campto necks were permanently down-flexed for concentrated feeding close to the ground surface. 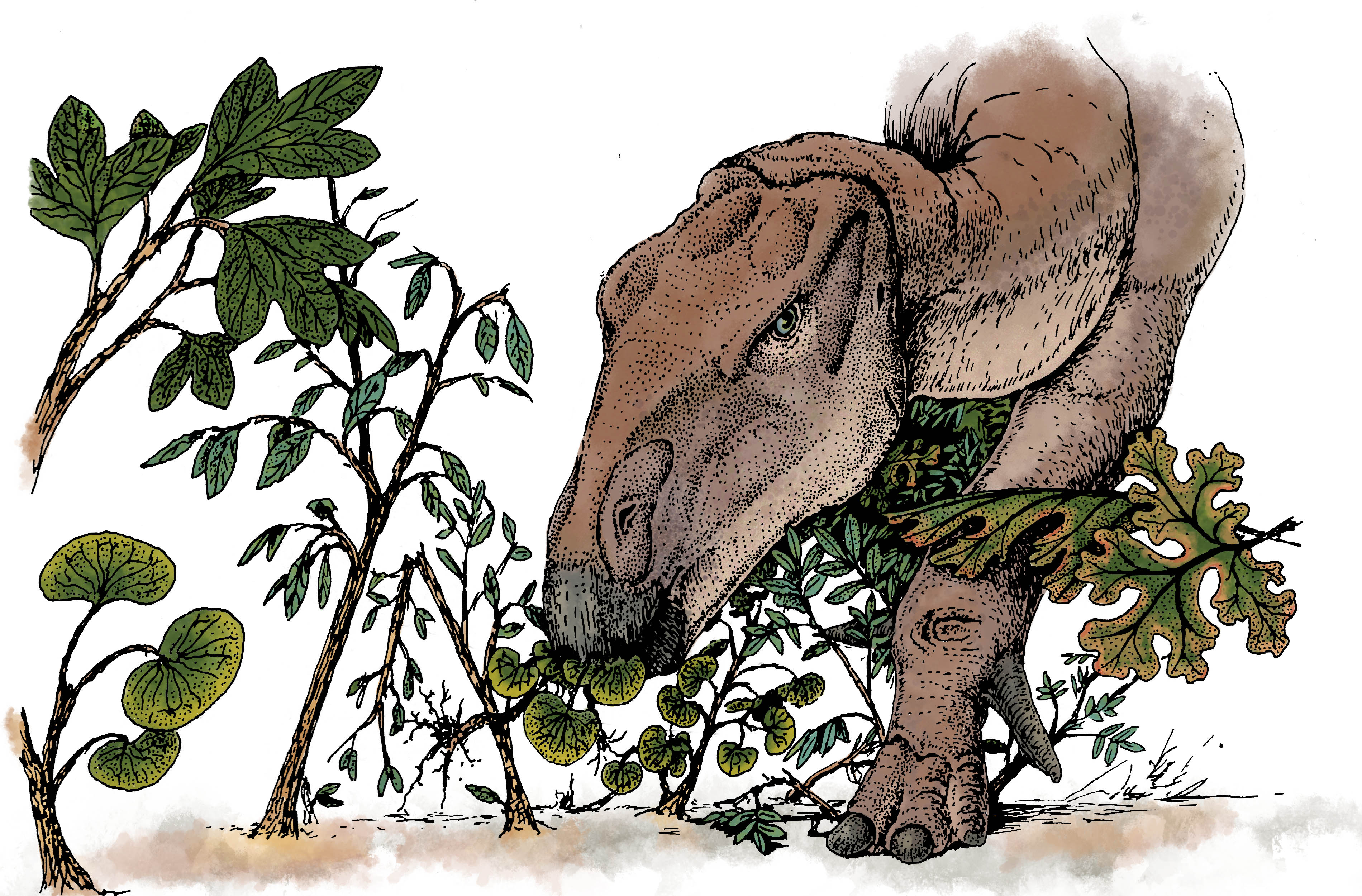 This array of high-feeding vegetarian tactics had evolved early in the Period and lasted right through to the very end of the Jurassic Period, about 140 million years ago. Then it happened — Vegetarian Revolution. As the Cretaceous began, stegosaurs died out most places. In their place came new waves of armored ankylosaurians, all feeding low, close to the ground. These new armored veggie-saurs rapidly achieved body sizes in the elephant range. Long-necked brontosaurians persisted but lost some diversity. The camptosaur-kin evolved into the famous “Thumb Spike Clan”, the iguanodonts. These chaps had first fingers modified into sharp, stout stabbing weapons (probably for fighting among themselves as much as repelling would-be predators). The iguanodonts had necks curved down so the head was quite low. 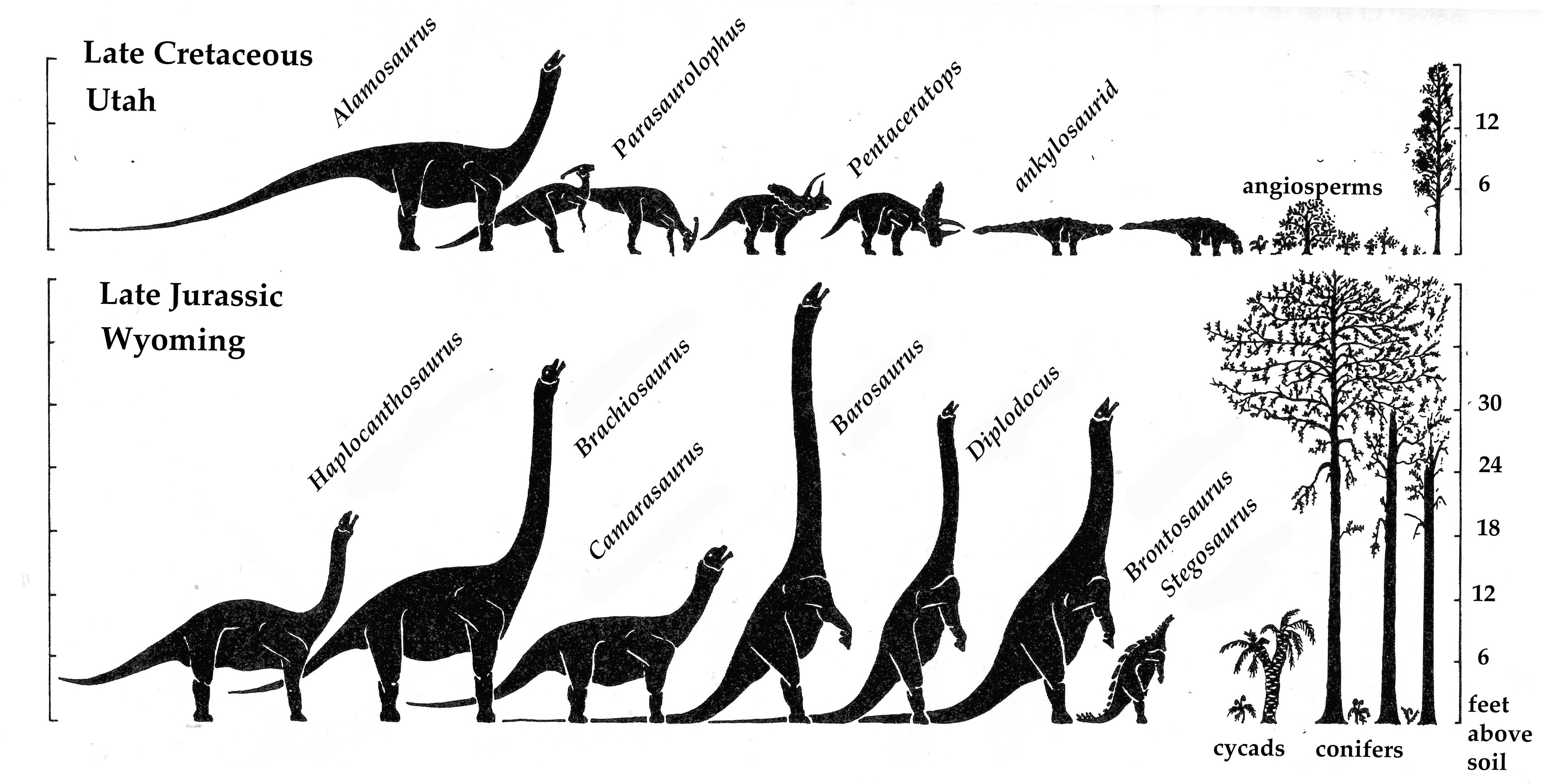 To summarize: In the Jurassic, plants were subjected to herbivore attacks spread from zero feet above the ground to twenty, thirty or forty feet. Once the Cretaceous began, the feeding became concentrated in lower and lower levels.

For low vegetation, it got worse as the Cretaceous world matured. More and more massive herbivores entered the low-feeding zones. Horned dinosaurs and duckbills had low head posture and must have done most of their feeding within a yard or two above the soil.

See the connection to angiosperm origins? The intensified pressure inflicted by vegetarianism upon gymosperms produced many more spots devastated by over-grazing and over-browsing. Therefore, the veggiesaurrevolution probably opened the opportunities for early flowering plants to expand and take over many more acres of landscape. With the collaboration of pollinating bugs.

If you are a fan of flowers — and who isn’t? –you must doff your hat to those Cretaceous maxi-herbivores, the low-level dinosaurian behemoths. These veggie-saurs disturbed wide swathes of woodland and forest, splendid opportunities for the first waves of flowering-plant evolution.