Here’s a task for you: try to rid your audience of their phobias by taking up-close photos of some of the creepiest bugs in our collection. Some are venomous, some do bite, but as usual, none of them want to hurt humans. Any bite or sting in the world of arthropods is an act of self-protection. Unless, of course, you’re prey…

Let’s start with insects. Take a look at this guy (or girl, rather). 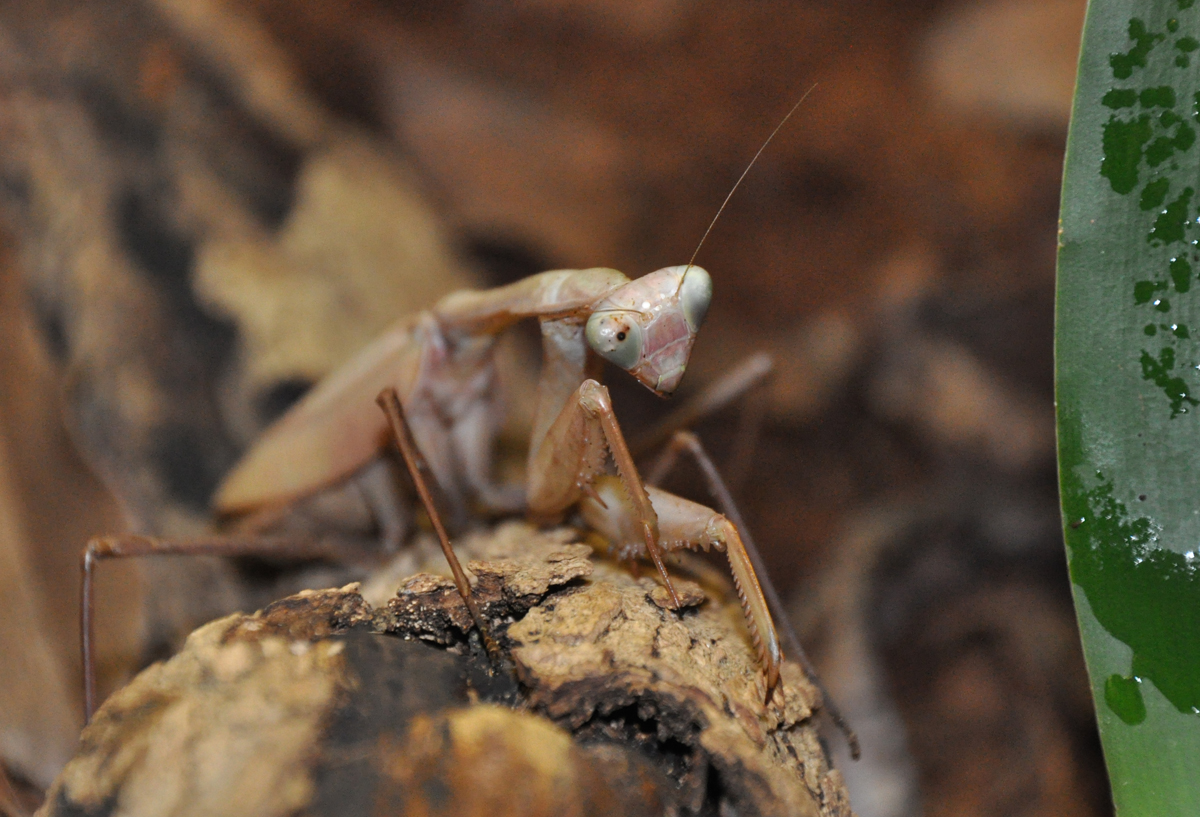 This is a female giant Asian mantis, Hierodula membranacea. With her spiny forelegs used for catching prey and her habit of devouring other bugs alive (not to mention her tiny pupils that look right at you), she seems pretty creepy. And she’s big at about five inches long and flies! But she’s not poisonous, doesn’t bite, and is practically harmless. In Asia, mantises are revered for their patience and hunting prowess, and are kept as pets. Creep factor: 4. Real danger: 0.

Now how about this big beetle? 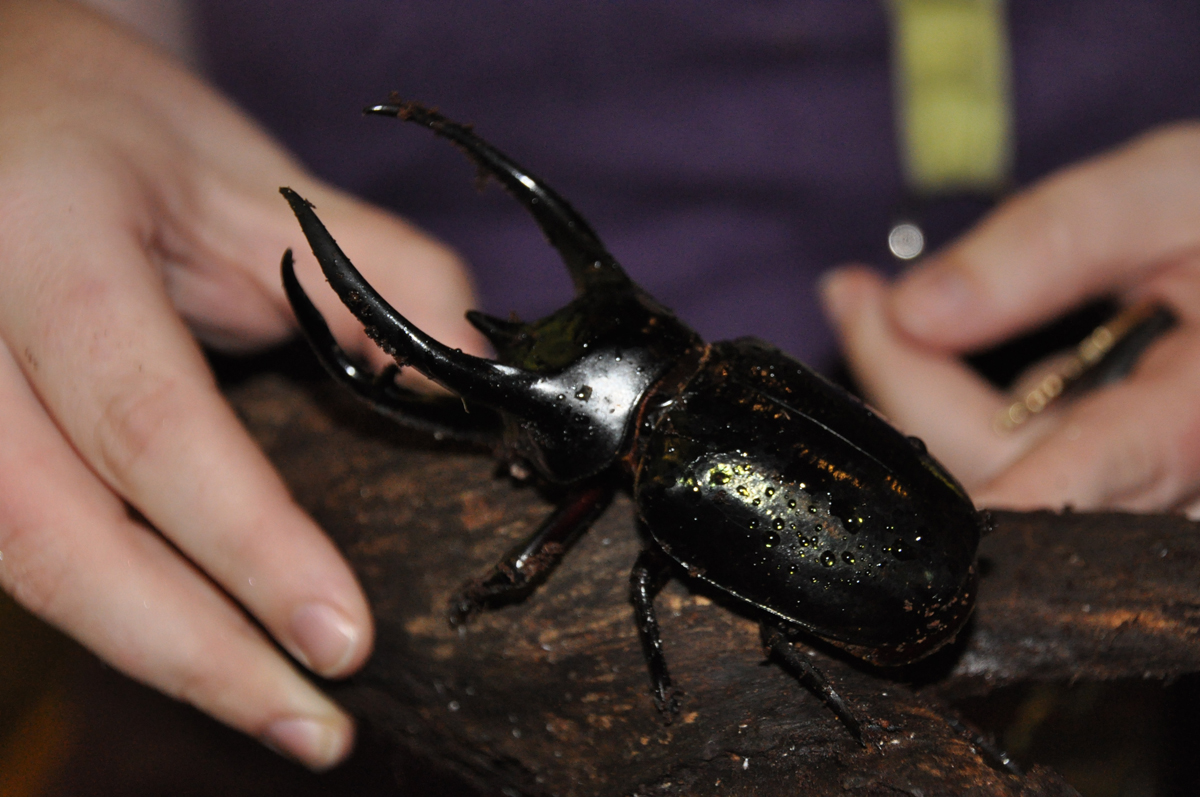 Size alone might keep you from allowing the Atlas beetle, Chalcosoma atlas, to crawl all over you, but it’s a beautiful and fascinating species. Its elytra or wing sheaths on its abdomen are incredibly strong and have a green iridescence. Its inch-long horns pose no threat to humans, but the beetle does use them to fight other beetles for mates. The front horn is attached to its head and is mobile, while the hind pair are attached to its thorax and remain still. Creep factor: 2.5. Real danger: 0.

Now let’s look at some roaches. 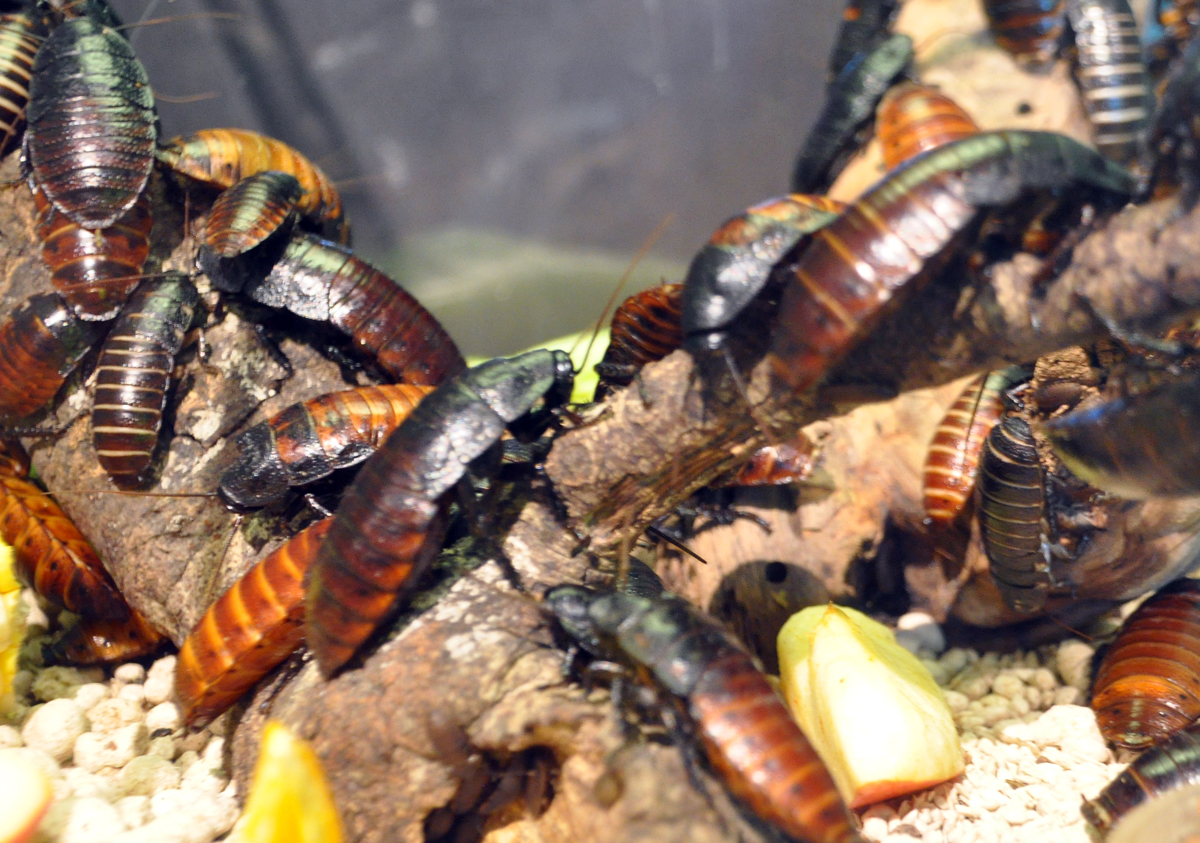 I’ll be honest. These are my great phobia. Madagascar hissing cockroaches, Gromphadorhina portentosa, emit a sound when threatened, but they are harmless. In spite of their creepiness, they are some of the oldest and most vital insects on Earth, acting as a clean-up crew that will eat just about anything, turning waste into nutrients that plants can use. Roach species keep themselves immaculately clean and will not hurt you, and these ones don’t even fly. Cockrell Butterfly Center Director Nancy Greig finds these little guys cute and cuddly, and I’m trying hard to see them through her eyes. One day, Nancy. One day… Creep factor: 6.5 (according to Jason). Real danger: 0. 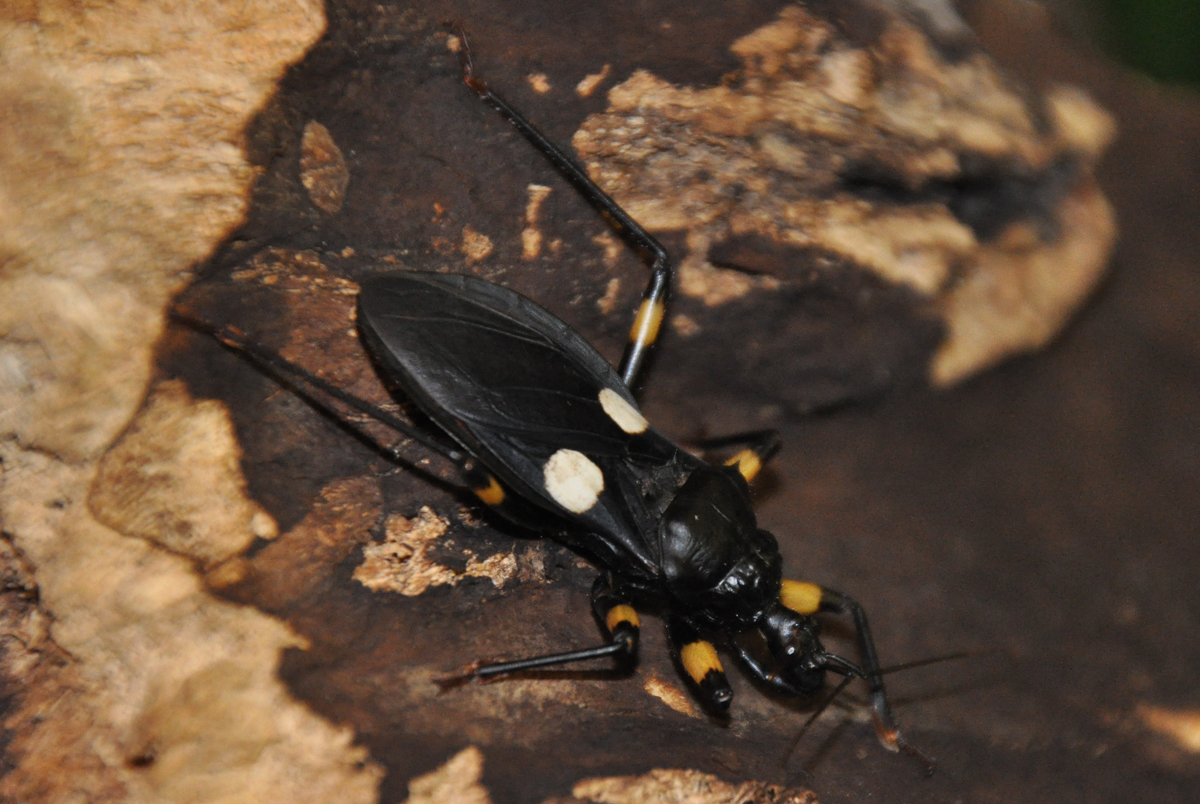 The white-eyed assassin bug, Platymeris biguttatus, is the first on the list that can harm humans. It injects venomous saliva into its prey, moves quickly, and flies. They stalk other insects, pounce and bite in a flash, then suck the fluids out of their victims. Assassin bugs are true bugs in that they belong to the insect order Hemiptera and are mainly characterized by their mouthparts which are modified for piercing and sucking. Their bite is more painful than a bee sting. Pretty creepy, but what you don’t touch can’t hurt you. I’d say they’re more awesome than scary. Creep factor: 4.5. Real danger: 2.5.

As they say, go big or go home. Take a look at this! 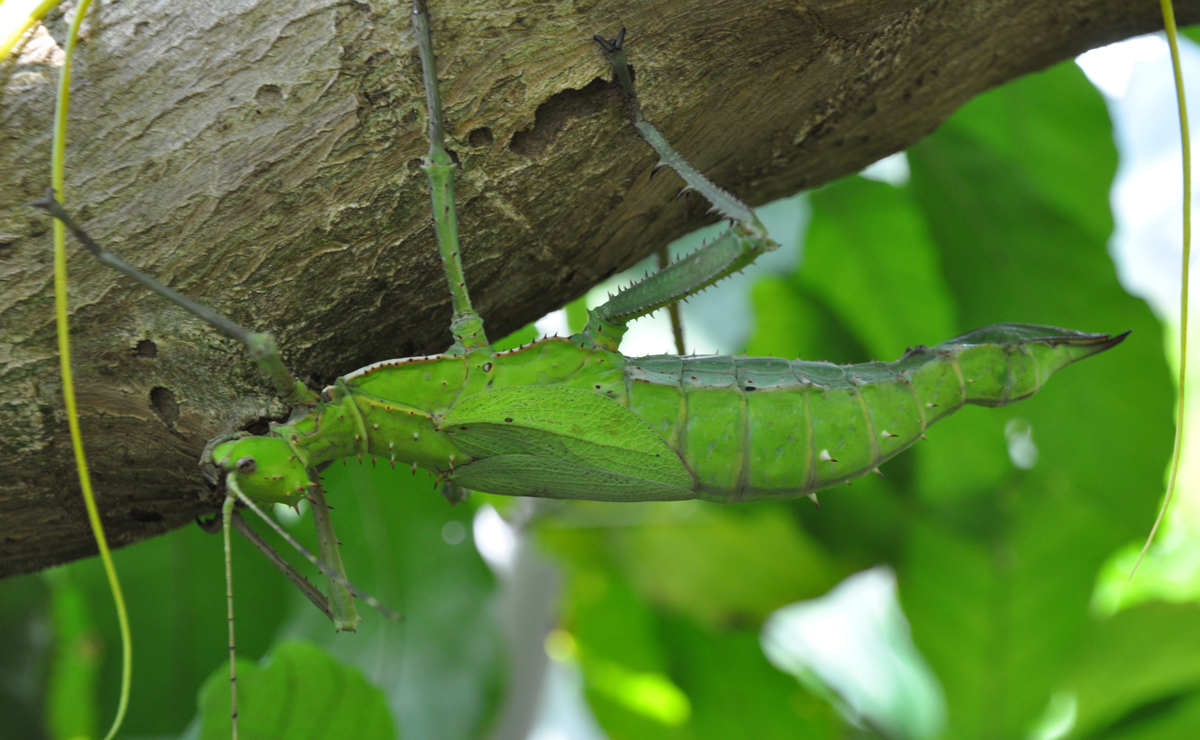 This strange-looking fella is a giant jungle nymph, Heteropteryx dilatata. No lie, it’s big. About eight inches of spiny legs, long antennae and small wings. When you touch its back, it fluffs its wings, emits a noise that sounds like a ratcheting wrench, and arches its abdomen like a scorpion to make itself appear larger. Here’s an example: 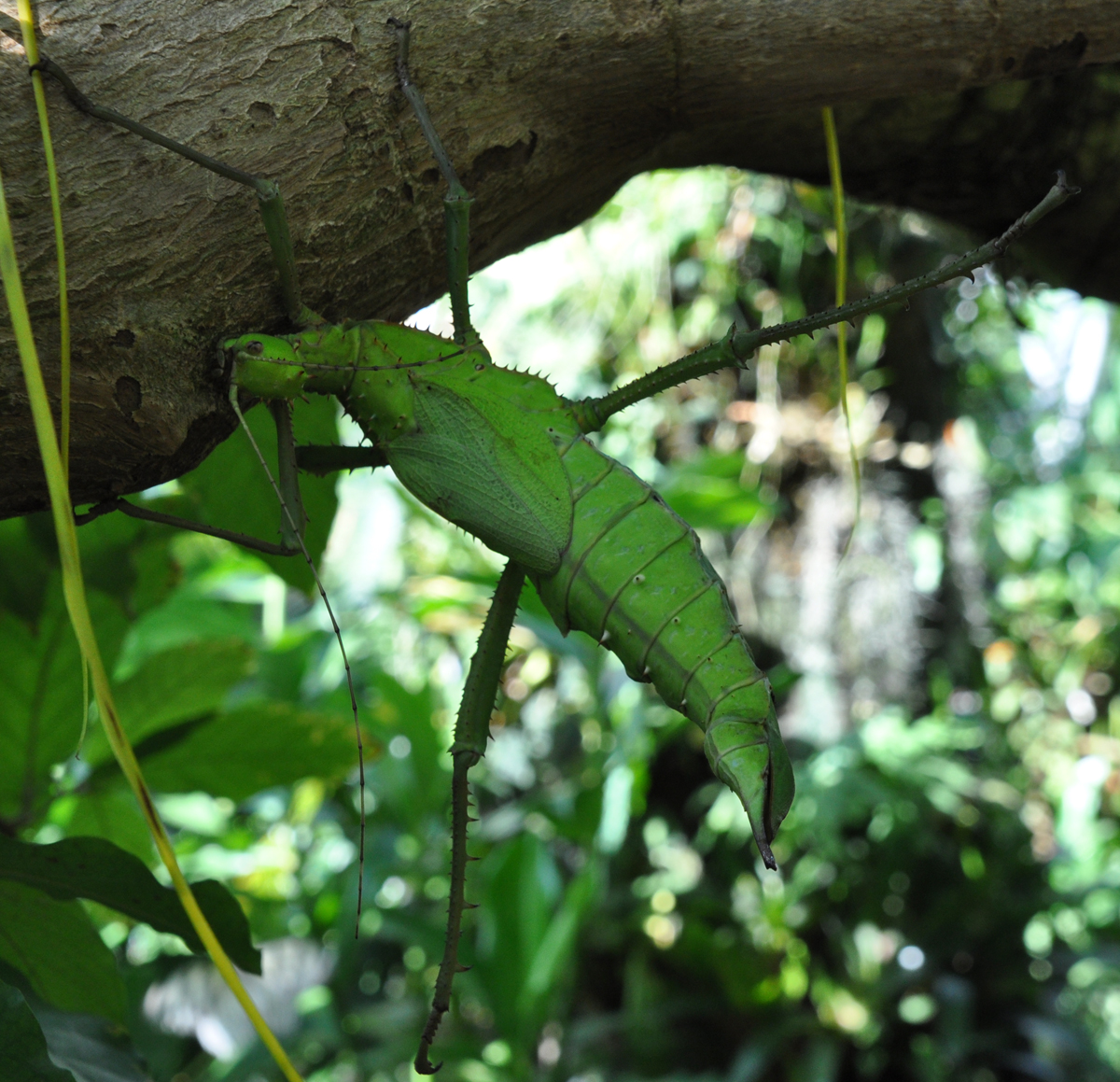 While the insect is harmless, this display can be intimidating for those unfamiliar with the species. Creep factor: 4.5. Real danger: 0. 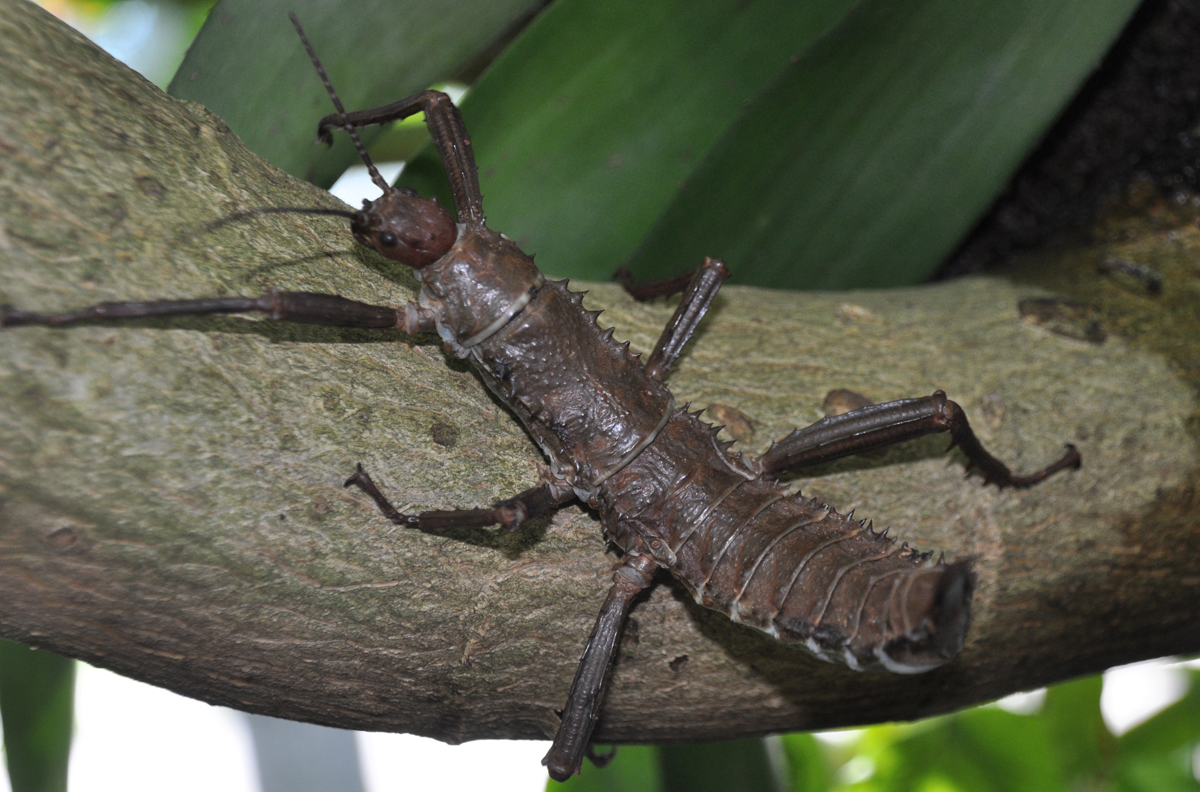 This female spiny devil, Eurycantha calcarata, is less aggressive than the male of her species, which has pronounced spines on its back legs. When disturbed or seized by a predator, this seven-inch-long insect thrashes its abdomen back and forth, using its spines to injure its enemies. Since our skin is much softer than its exoskeleton, the spiny devil can inflict a nasty puncture wound without biting or stinging. Creep factor: 3.5. Real danger: 1.5.

Now let’s move on to arachnids. 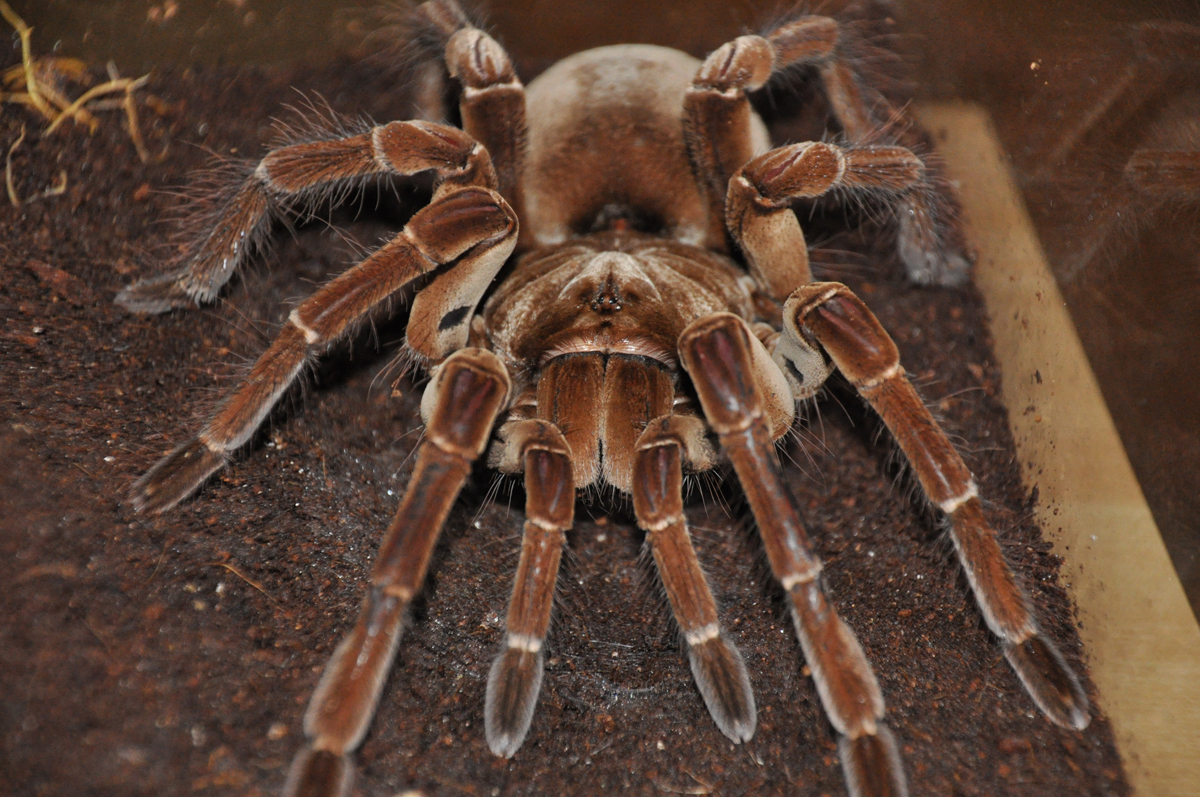 Boom. Burn the house down. If you’re arachnophobic, there’s nothing more frightful than the goliath bird-eater tarantula, Theraphosa blondi. This tarantula, named Birdie, is locally famous for her size — about seven inches across, much larger than the palm of your hand — and her feistiness. Like many tarantulas, when threatened, Birdie scrapes tiny barbed hairs from her abdomen which can irritate and blind the eyes of mammals and other predators. She has venomous fangs, eight legs and two pedipalps for snatching her victims. You wouldn’t want to pick her up. However, she is a beautiful specimen with her mocha-colored fluff, and her athleticism as a predator is remarkable. This girl lives up to her name and can occasionally prey on birds in the wild. And like any spider, she won’t hurt you if you don’t mess with her. Creep factor: 9. Real danger: 4.

While we’re on the subject of tarantulas… 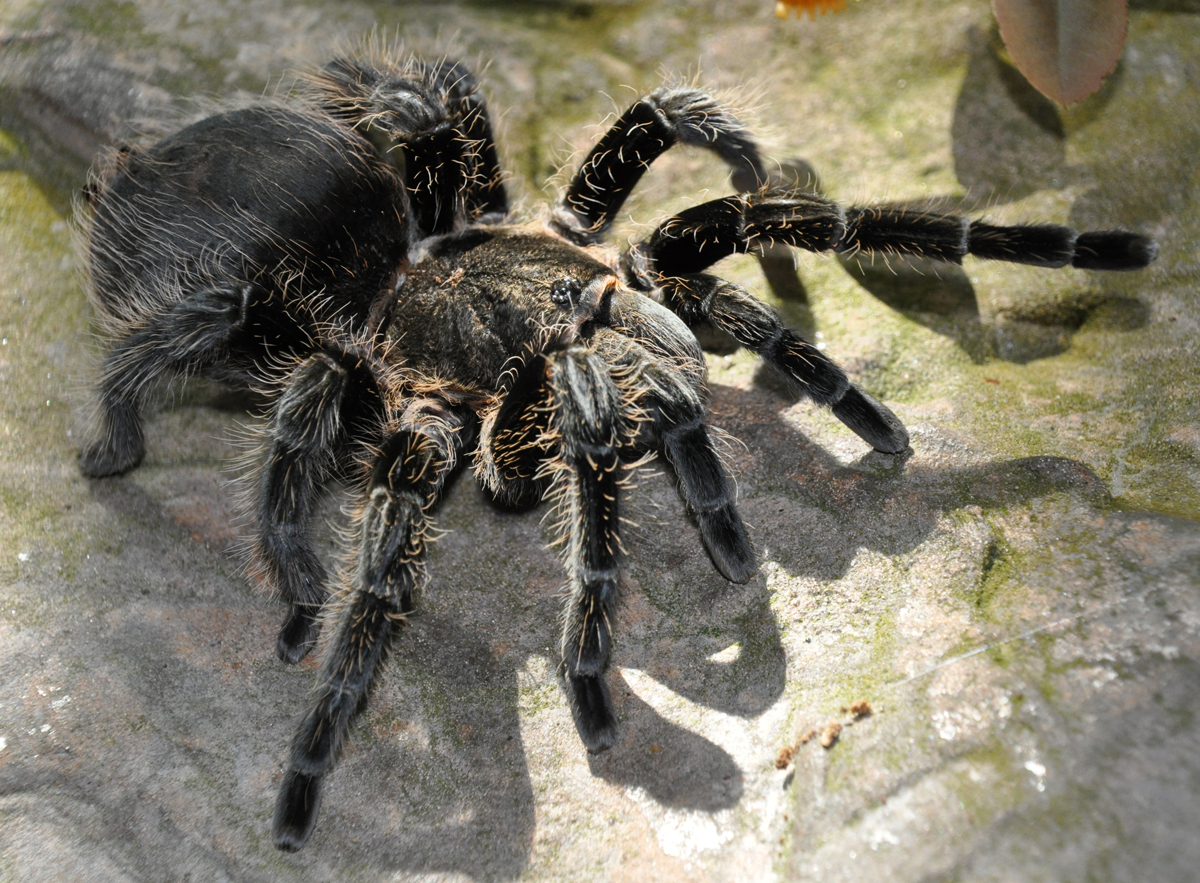 How about this well-fed Costa Rican curly-hair, Brachypelma albopilosum? Unlike the goliath bird-eater, the curly-hair is much more docile, but no less efficient at catching and envenomating her prey. I wouldn’t pick one up in the wild, but our entomologists handle this spider, named Peanut, on a regular basis with very little trouble. Creep factor: 8. Real danger: 2.

Last tarantula, but certainly not least… 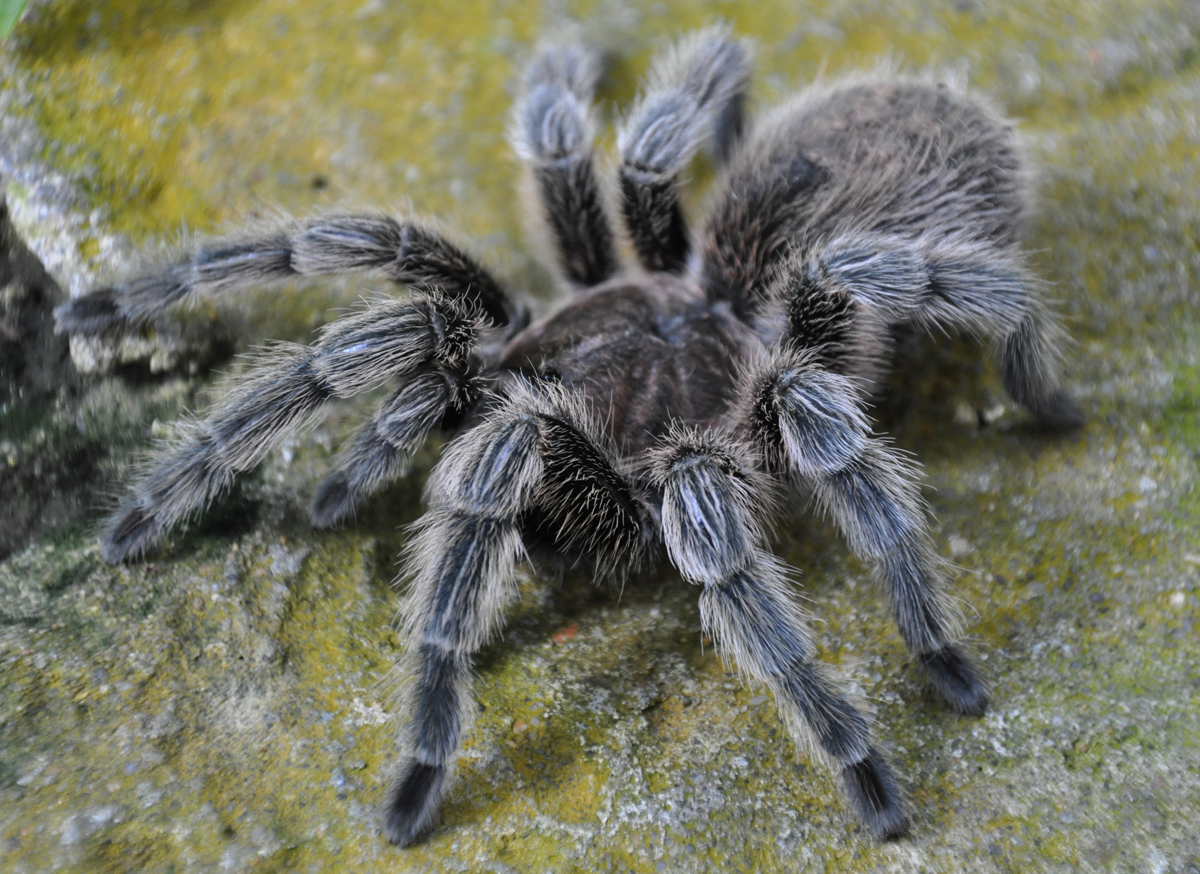 You arachnophobes are probably like, jeez, how many tarantulas does the world need? This Chilean rose-hair tarantula, Grammostola rosea, is more docile than the curly-hair. In the right light, the fur on her cephalothorax glows with a red iridescence, plus she’s cute and cuddly. She still has fangs, though. Always respect the fangs. Creep factor: 7. Real danger: 2.

Now for some little guys. 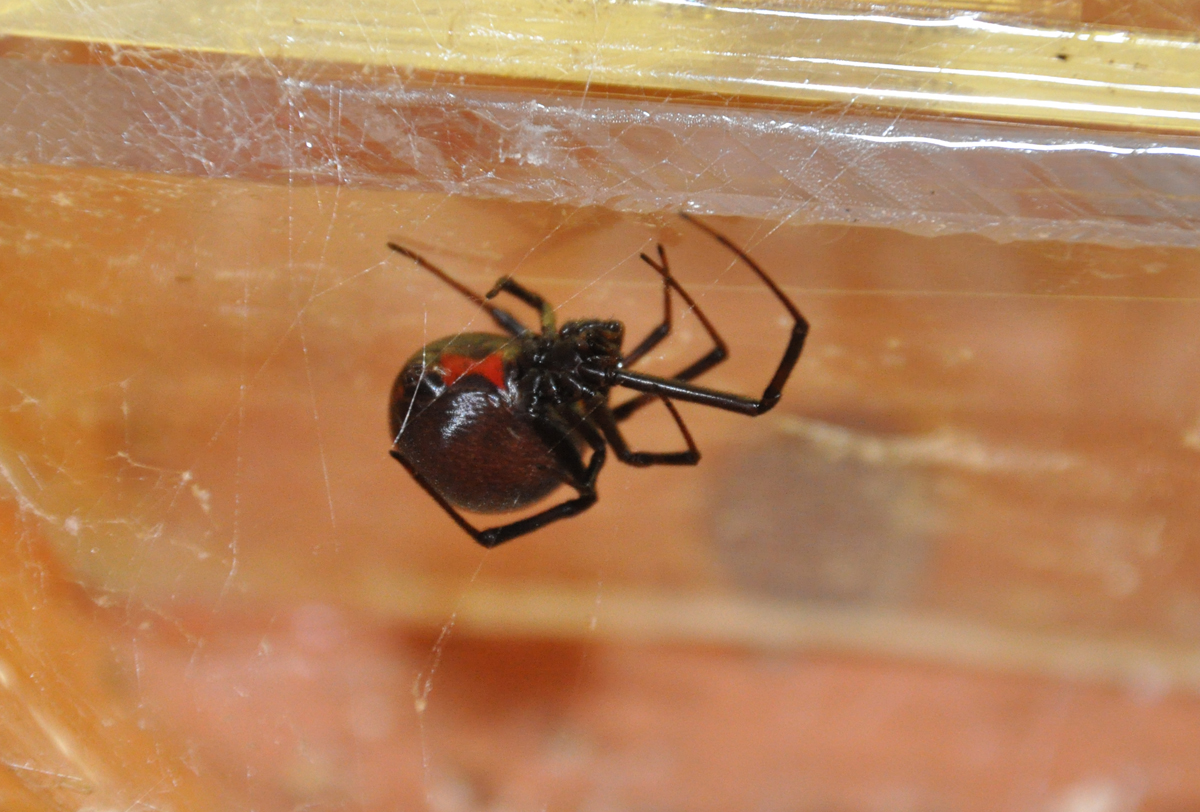 Size isn’t a factor with this famous creep-tastic black widow spider, Latrodectus mactans, but her bite is potentially deadly to humans. Symptoms of a black widow bite can include localized pain and swelling around the bite, muscle cramps, tremors, abdominal pain and vomiting. If you think you have been bitten by a black widow, seek medical treatment. The red hourglass shape on the underside of her abdomen is an advertisement for danger, but it also allows us to easily identify the spider if a bite does occur. These shiny, black arachnids hide in crevices away from humans, but can occupy places like barns and sheds and can be aggressive around their egg sacs. I’d say the danger here outweighs this spider’s creepiness. But yet again, they are good at what they do, have evolved a powerfully efficient venom, and won’t hurt you if you don’t disturb them. And she’s like a little black pearl with legs. Creep factor: 6.5. Danger: 9.

Let’s look at another small-but-deadly spider. 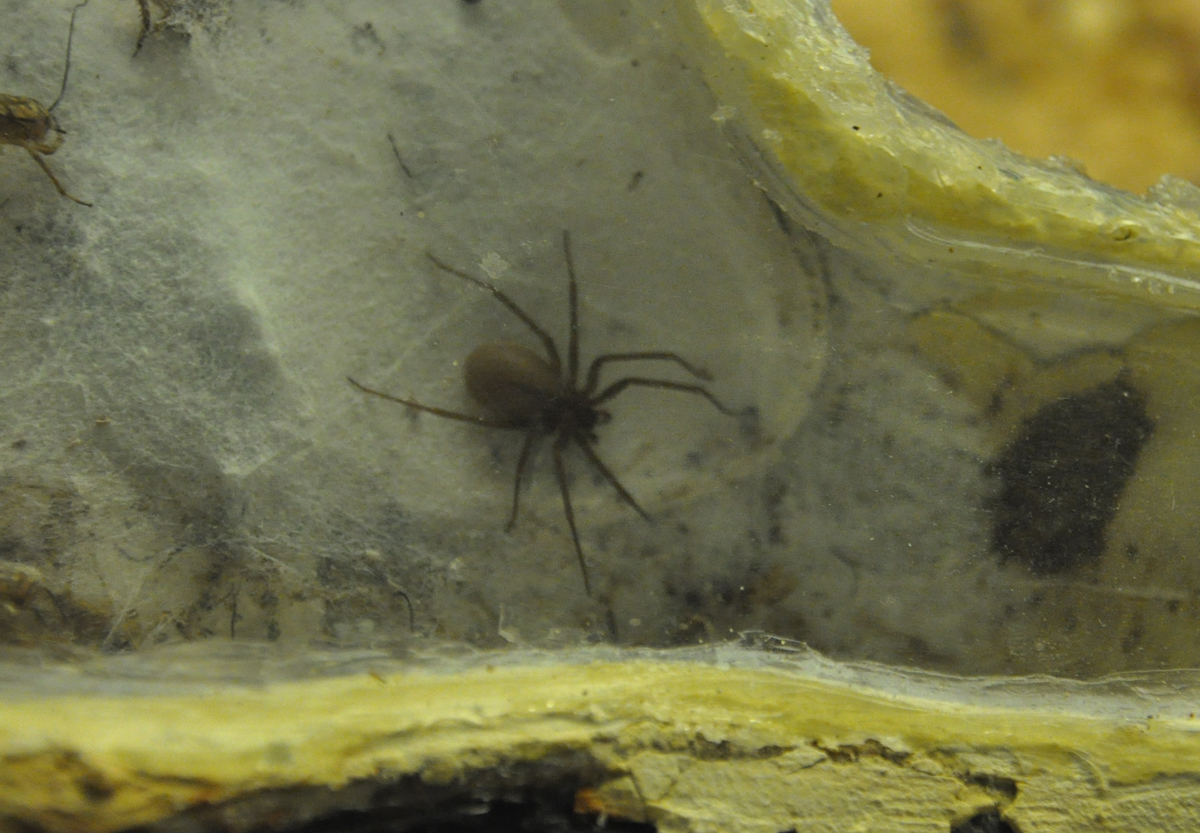 The brown recluse, Loxosceles reclusa, prefers dark places to hide in, similar to the black widow, and their venom is just as formidable, though they are non-aggressive and only bite when threatened, usually when pressed up against a victim’s skin. Their venom, used to catch their prey, contains enzymes that break down skin, fat, and blood vessels in humans, leading to localized necrotic tissue if left untreated, serious medical conditions and eventually death. If bitten, seek medical attention. You can recognize a brown recluse by the violin shape on its cephalothorax, which is pretty cool if you ask me. For this reason alone, I’d call the brown recluse the classiest and most musical of spiders. Who else garbs themselves in classical instruments? Creep factor: 6. Real danger: 7.

Finally, and most creepily, look at the adaptations on this guy! 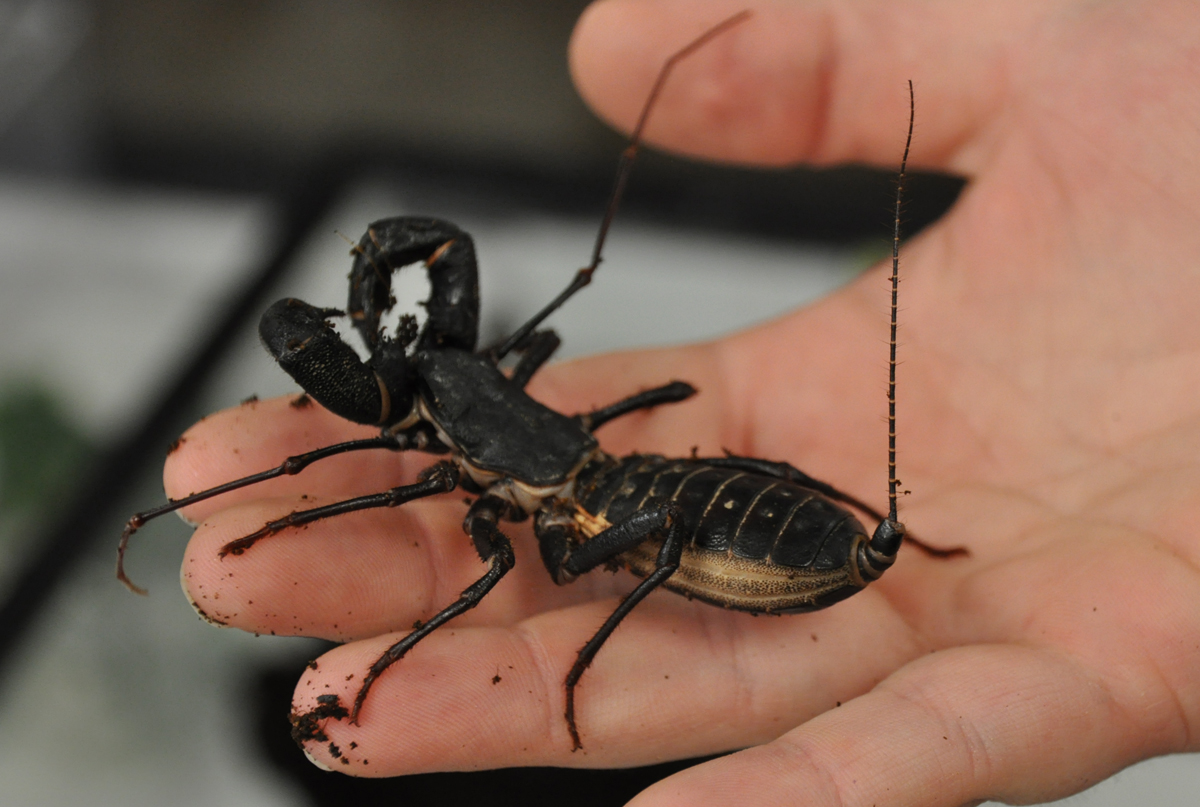 To my eye, whipscorpions, Mastigoproctus giganteus, are about as creepy as it gets. It’s big at around four inches in length, has eight legs and a pair of pinchers, and a whip-like tail in place of a stinger. They are carnivorous, feeding on millipedes, slugs, and even cockroaches (which makes them my friends, of course). While some species of whipscorpions can exude an acidic compound when threatened, which smells like vinegar, they are harmless to humans. Plus, look at how awesome they are! They’re like the Indiana Jones of arachnids! Creep factor: 10. Real danger: 0.

Visit the Cockrell Butterfly Center to see these creepy arthropods in action and learn more about their unique and fascinating adaptations. 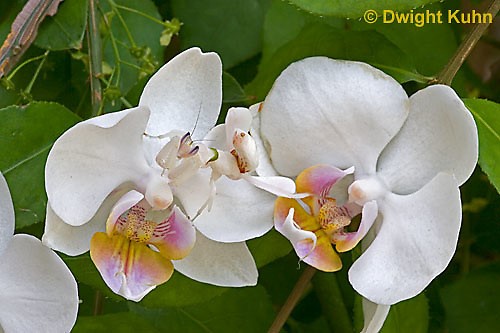 Praying mantises are true masters of disguise. Like many insects (and other animals), mantises will use their cryptic appearance to blend into the environment. For praying mantises, camouflaging has two-fold benefits. For one, mantises are preyed on by many animals- including birds, lizards, frogs, small mammals and even larger mantises. Staying hidden from these predators […]