Ever wonder where George Lucas got his ideas for the futuristic costumes in Star Wars? Darth Vader’s intimidating helmet seems the stuff of a sci-fi nightmare, and a hot, glowing light saber seems like a swordfighter’s dream. These costumes remain some of the most iconic in film history, but they were based in reality. 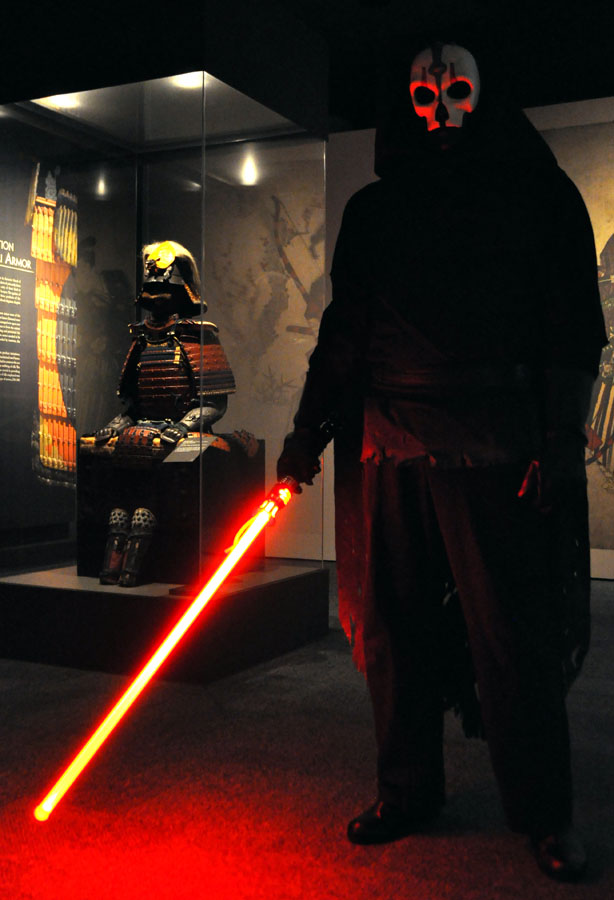 An intimidating Darth Nihilus threatens guests with his light saber in the Samurai exhibit.

Lucas was a fan of Japanese samurai culture, and it shows through his costumes and the code of the jedi, those warrior-monks who trust in the Force and give their lives to the service of those they are sworn to protect. The jedi use ancient weapons even by the standards of the Star Wars universe, and train from childhood to master the secrets of the Force.

The samurai of feudal Japan held a similar attitude. The word itself means “service,” and while samurai could hold no possessions, their communities and the royalty they protected made sure their needs were met while they trained in the disciplines of combat and self-control. It was disgraceful to live as a samurai without a master, and taking their own lives at the end of their service was common. 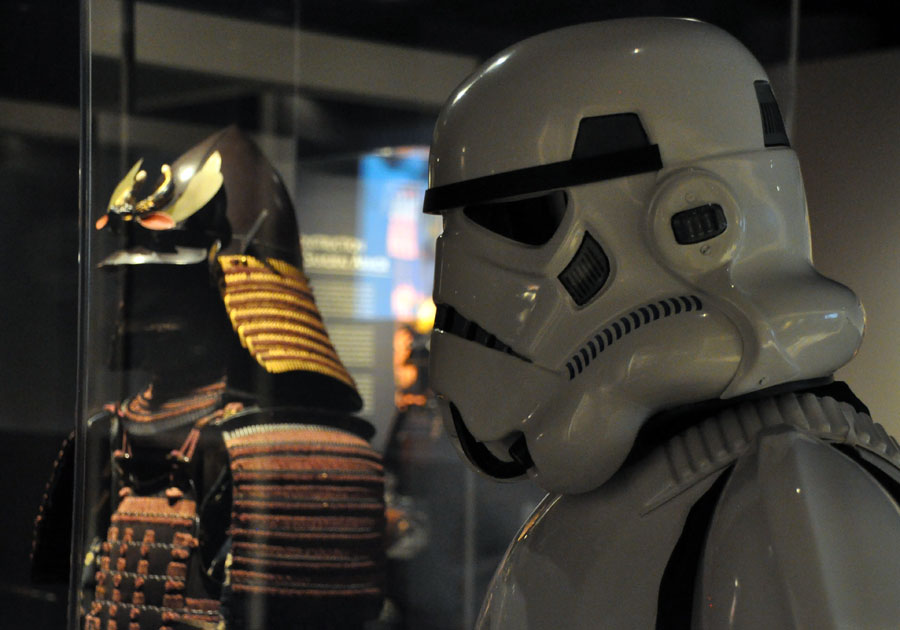 Lucas credited mythologist Joseph Campbell for influencing the structure of the Star Wars movies, explaining that in the West, mythology had begun to disappear with the downfall of the Western, and he wanted his work to “set standards” in the fashion of old myths. Couple this with a fascination with the famous film by Akira Kurosawa, The Seven Samurai, and Lucas had the makings of his space opera franchise. Though Kurosawa was a Japanese filmmaker, themes in the movie carried many of the same values audiences saw in the western: loyalty, trust, ingenuity, power, and faith in the underdog to name a few. 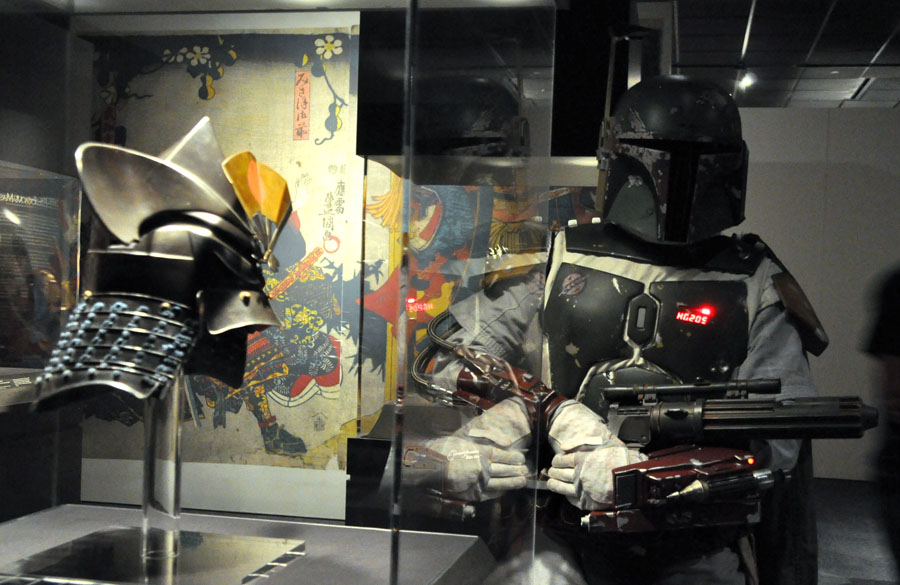 Boba Fett also owes his look to the samurai.

Science fiction was the trending tale of the late 1970s. Interest in space and adventure ran high, and Lucas saw an opportunity to marry his love of mythos, Japanese culture, and the sci-fi genre into the highest-grossing film of all time until Titanic hit the big screen in 1997.

With the opening of the Samurai: The Way of the Warrior temporary exhibit at the Houston Museum of Natural Science, docent Kris Mills, a student of costume history, saw an opportunity to demonstrate the link between Lucas and traditional Japanese clothing. Mills hosted the first Jedi-Samurai Tour Thursday night, a multimedia presentation featuring photography, Lucas’s costumes, and a demonstration of katana and light saber techniques. Kurosawa’s The Seven Samurai was screened in the exhibit as well. Comparing the western art with the eastern culture side-by-side offers a deeper appreciation of Star Wars and samurai culture alike. 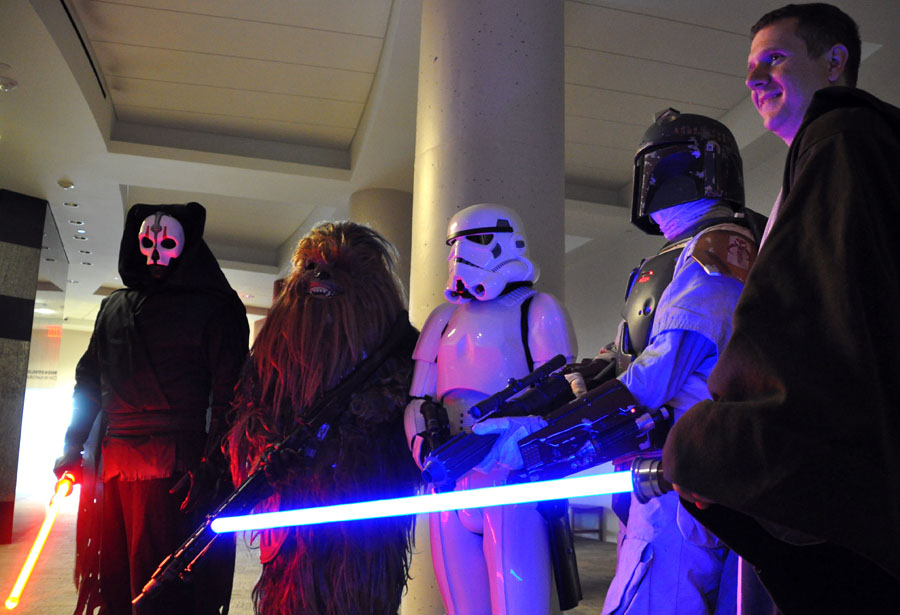 The cast of characters who visited the exhibit for the Jedi-Samurai tour Thursday night.

“[Star Wars] was traditional Japanese clothing and values translated into science fiction,” Mills said. “George Lucas wanted to give his generation Buck Rogers, but he’d been reading Joseph Campbell, so he was influenced by the Asian saga.”

In the slide show, it becomes apparent that Lucas used samurai masks as models for Darth Maul’s face paint and other Sith helmets, samurai kabuto and Han Dynasty hair styles for Queen Amidala and other royalty, and the Japanese obi or robe for the jedi’s distinctive monk-like appearance. (One wonders whether Lucas didn’t use Asian terminology to name his characters Han Solo and Obi-Wan Kenobi as well.) Adam Barnes, modeling the jedi costume, introduced these themes before guiding the guests into the exhibit. 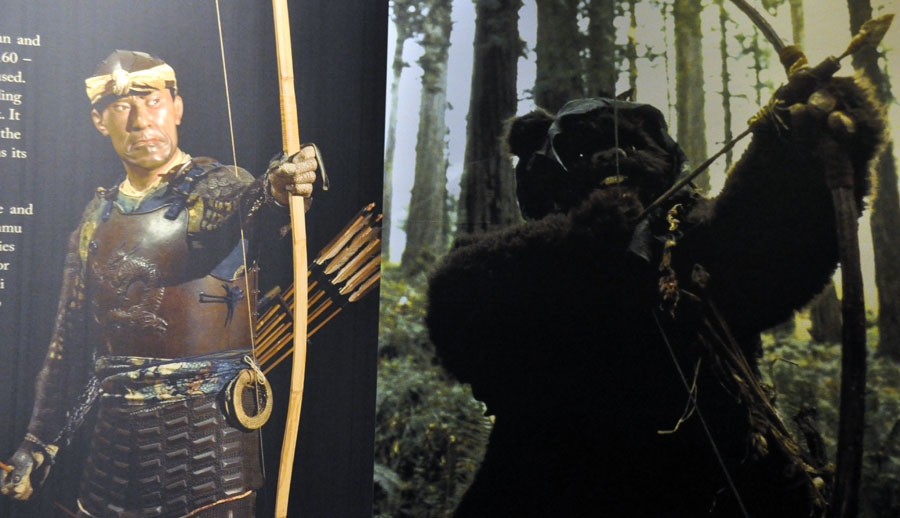 The bear-like Ewoks of planet Endor seem similar in many ways to samurai archer.

“The idea of imperialism and a grand empire versus a small band of samurai-like rebels is also very Japanese,” Barnes explained.

Models appeared in an Imperial Storm Trooper outfit, Boba Fett’s armor, the costume and face mask of Darth Nihilus, a Sith lord from the video game Star Wars: Knights of the Old Republic, and in a Chewbacca outfit. With the models standing beside samurai helmets and armor, it’s easy to make connections. Of course, it’s also a blast just to hang out with Star Wars characters and see cool samurai gear, not to mention a great photo op! 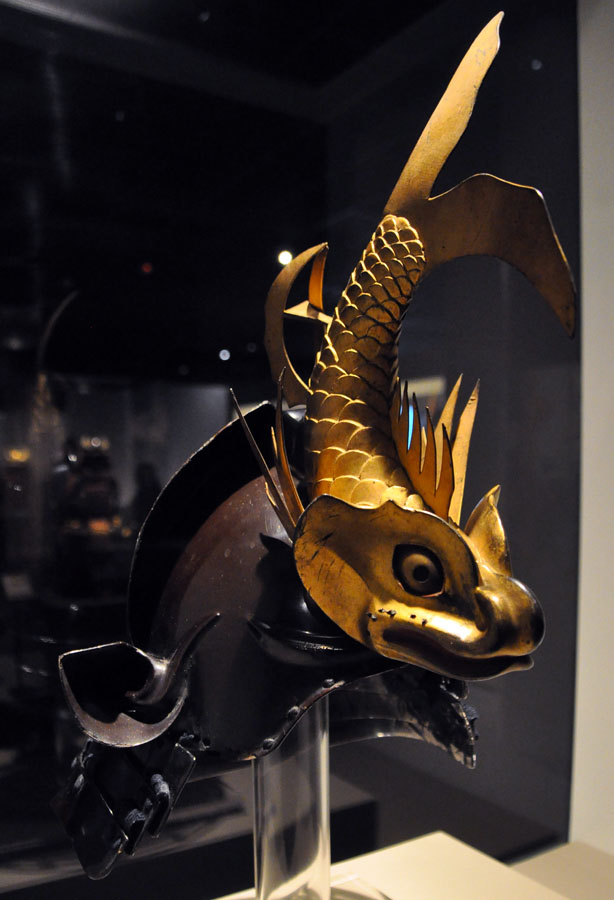 Take the Jedi – Samurai Tour July 16 or August 20 from 6 to 9:30 p.m., or check out Samurai: The Way of the Warrior before the exhibit makes like a ninja and vanishes September 13. For more information about this and other presentations, visit HMNS online.

Previous Post
Back to Seymour, Back in time: Part One
Next Post
Mark Your Calendars for these events happening at HMNS 6/22-6/28 By Ralph Philips. HMNS Sugarland Docent, edited by James Wooten, HMNS  Astronomer May the fourth is coming, and with it some positively stellar events hosted by the Houston Museum of Natural Science to mark the occasion. There’s the May the Fourth mixer at our Main campus, and a Stellar Wars presentation with crafts and games […] May The Fourth Be With You!

I find your lack of costume disturbing. Get ready for our May the Fourth Be With You Mixer with these costume ideas. Houston, we’ve detected signs of intelligent life…at Mixers & Elixirs! Grab your friends on Thursday, May 4th and head to HMNS to celebrate your inner rebel or join the dark side at […] Sure, you can go daring. You can go scary. If you’re into zombie and cat costumes, more power to ya. But if you’re still searching for your look this year, consider going geek! Especially if you’re coming out to Spirits and Skeletons at the Houston Museum of Natural Science. Nerds are all the rage these […] HMNS changed the way I think about Earth, time, humanity, and natural history

After 90 days working at the Houston Museum of Natural Science, here’s the verdict: I love it here! Through research required to compose and edit posts for this blog, I have learned about voracious snails, shark extinction, dinosaur match-ups, efforts to clean up ocean plastic pollution, Houston’s flooding cycle, a mysterious society in south China, […]