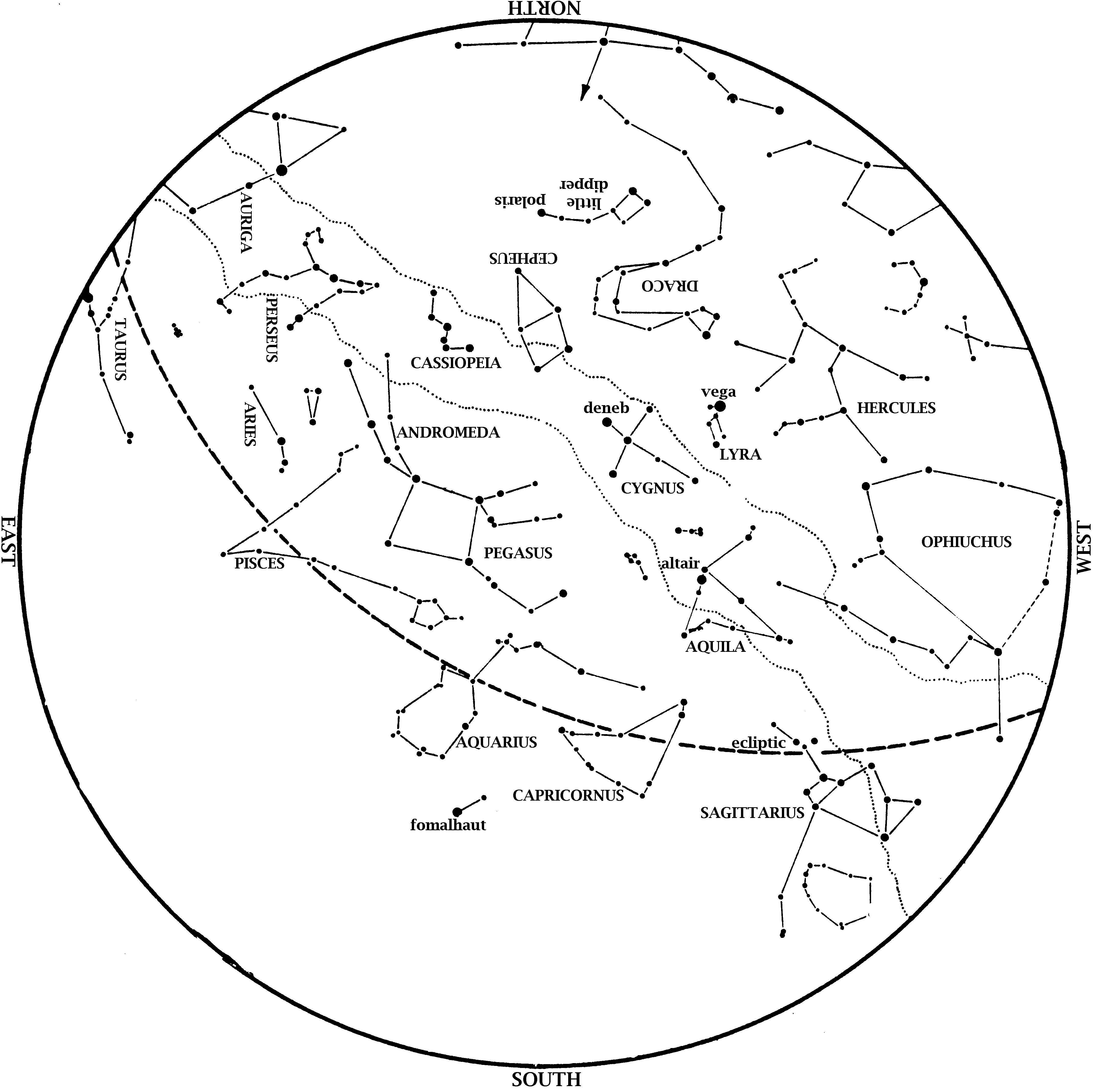 This star map shows the Houston sky at 10 pm CDT on September 1, 9 pm CDT on September 15, and dusk on September 30. To use the map, put the direction you are facing at the bottom. The Summer Triangle is high in the west. This consists of the brightest stars in Cygnus, Lyra, and Aquila. The ‘teapot’ of Sagittarius sets in the southwest, with Mars to its right. Pegasus, the Flying Horse, is high in the east. To the south and east, we see a vast dim area of stars known as the Celestial Sea, where only Fomalhaut stands out.

This month, Mars remains in the southwest at dusk this month as it pulls away from Antares in Scorpius. Mars continues to fade a little each night as Earth continues to leave it farther behind.

Saturn drops into the Sun’s glare by Halloween. See how long you can keep track of it as it appears lower and lower to the southwest horizon each night this month.

Jupiter is now higher in the east at dawn; it is the brightest thing there.

Venus is passing behind the Sun and thus out of sight this month. Superior conjunction (Venus in line with the Sun, on the far side of the Sun) is on October 25.

Autumn represents sort of an ‘intermission’ in the sky, with bright summer stars setting at dusk, while bright winter stars such as Orion have not yet risen.  The ‘teapot’ of Sagittarius sets in the southwest early in the evening. The Summer Triangle is high in the west. Meanwhile, the Great Square of Pegasus is in the east, indicating that autumn has begun. The stars rising in the east are much dimmer than those overhead and in the southwest because when you face east at dusk in October, you face out of the Milky Way plane. The center of our Galaxy lies between Scorpius and Sagittarius, while the Summer Triangle is also in the galactic plane. Pegasus, on the other hand, is outside the plane of our galaxy and is a good place to look for other galaxies. Nearby constellations Andromeda and Triangulum (a small triangle) contain the spiral galaxies nearest to our own. Total Lunar Eclipse October 8 + Partial Solar Eclipse October 23!
The Full Moon of October 8 enters Earth’s shadow completely, causing a total lunar eclipse!  Partial eclipse begins at 4:15 am, with totality from 5:24 to 6:25 am. The Moon then begins to leave the shadow, but is still partially eclipsed as it sets at 7:26 in Houston. This is the second of four total eclipses we can see in 2014-15; the next one occurs April 4, 2015.

The New Moon of October 23 partially blocks the Sun, causing a partial solar eclipse!  For us, the eclipse begins at 5:00 and is still in progress at sunset (6:43 pm). For both eclipses you’ll need a site with a clear view to the west to watch the setting Moon or Sun in eclipse.

Celebrate The George October 10-12!
The George Observatory celebrates its 25th anniversary the weekend of October 10-12!  That weekend, the observatory is open for a members event on Friday evening and Sunday night in addition to our customary Saturday night hours.

Previous Post Last Chance for Glam: Bulgari: 130 Years of Masterpieces closes in less than a week
Next Post We've Got the Fever: Particle Fever screening one night only at HMNS! (10/9/14)