The country at-large may be celebrating Columbus Day, but around these parts, we salute National Chocolate-Covered Insects Day, too.

Yes, we actually want you to eat bugs

To help promote National Chocolate Covered Insect Day on Monday, October 14 (yes, it’s a real thing!), I thought a blog dedicated to entomophagy would be a great way to honor this oh-so-special day.

“Entomophagy” originates from the Greek word “entomon” (insect) and “phagein” (to eat). Yes, entomophagy is the consumption of delicious, nutritious insects (and often other buggy friends). Insects are at the bottom of the food chain, and are eaten by many animals, but the term “entomophagy” is directed at the human consumption of insects.  Other animals that feed on insects and insect relatives are commonly known as insectivores.

Did you know the Cockrell Butterfly Center has a vending machine filled with all sorts of edible insect goodies? We have even added some new products, one of which comes from a great company called Chapul.  Many of our products are novelty style, but Chapul protein bars are the real thing! These bars, from personal experience, are quite tasty. My favorite is the Aztec Bar, which is flavored with chocolate, coffee, and a hint of cayenne for some added heat. Oh, and don’t forget the cricket flour which gives them their unique texture and source of protein!

Now, I heard you say “Gross!” at the beginning of this blog. But is it really fair that many people consider some arthropods (a.k.a. bugs) more edible than others? You probably love to eat shrimp, crab, crawfish, and lobster, but those delicacies are arthropods just like scorpions, spiders, ants, grasshoppers, and any other jointed-leg creature you can think of! 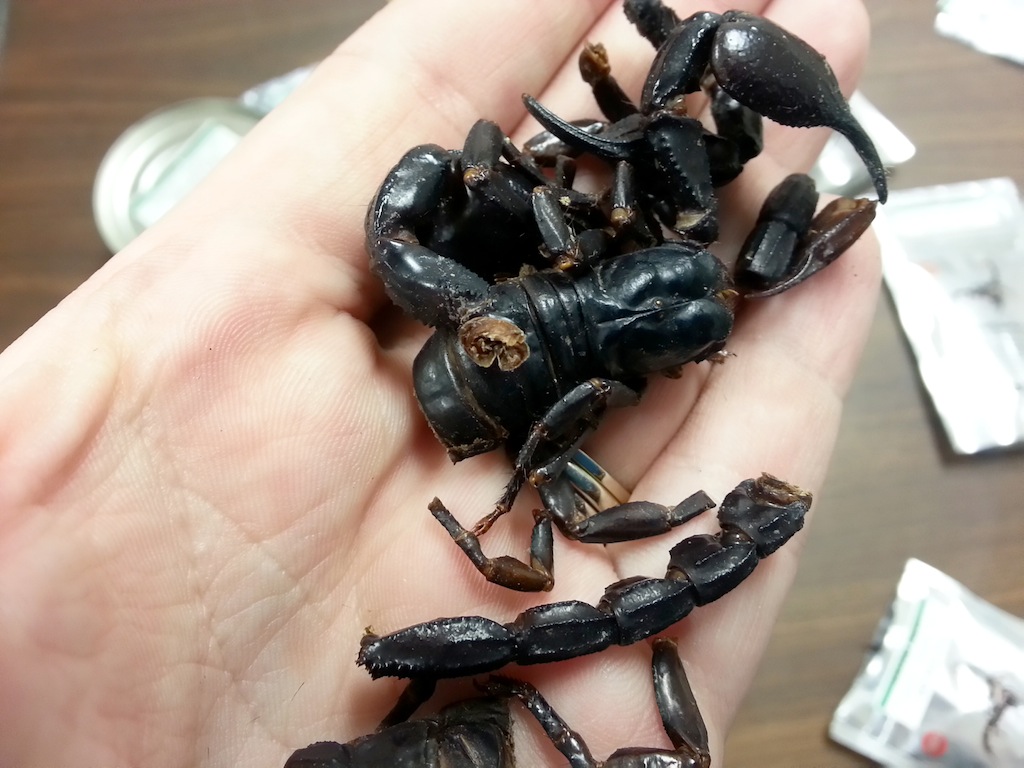 Entomophagy in other cultures

Aside from Europe, Canada, and the United States, entomophagy is commonly practiced throughout most cultures around the world. In fact, over 1,400 species of insects are known to be eaten in 80 percent of the world’s nations! Winged termites are used in many recipes in Ghana during the spring rains and wasp crackers are enjoyed by elders in the highlands of Japan.

In Chinese culture, beekeepers are considered virile because they regularly eat larvae from their beehives. How do de-winged dragonflies boiled in coconut milk with ginger and garlic sound?  Mmm-mmmm good! This is a Balinese delicacy. Cicadas, fire-roasted tarantulas, and ants are prevalent in traditional Latin American dishes. One of the most famous culinary insects, the agave worm, is eaten on tortillas and placed in bottles of mezcal liquor in Mexico.

Hmmmm, this tomato sauce is a little extra “herby”

Okay, so I still haven’t convinced you? What if I told you that Americans consume quite a few insects every year without even knowing it? The Food and Drug Administration (FDA) has a list of the amount of insects they allow in packaged food.  This report is called “The Food Defect Action Levels: Levels of natural or unavoidable defects in foods that present no health hazards for humans.”

Depending on how brave you are, you can view the list and find that 30 fly eggs or two maggots in your spaghetti sauce is acceptable.

Yummm, and who wants dessert? Chocolate can have an average of 60 or more insect fragments per 100 grams. 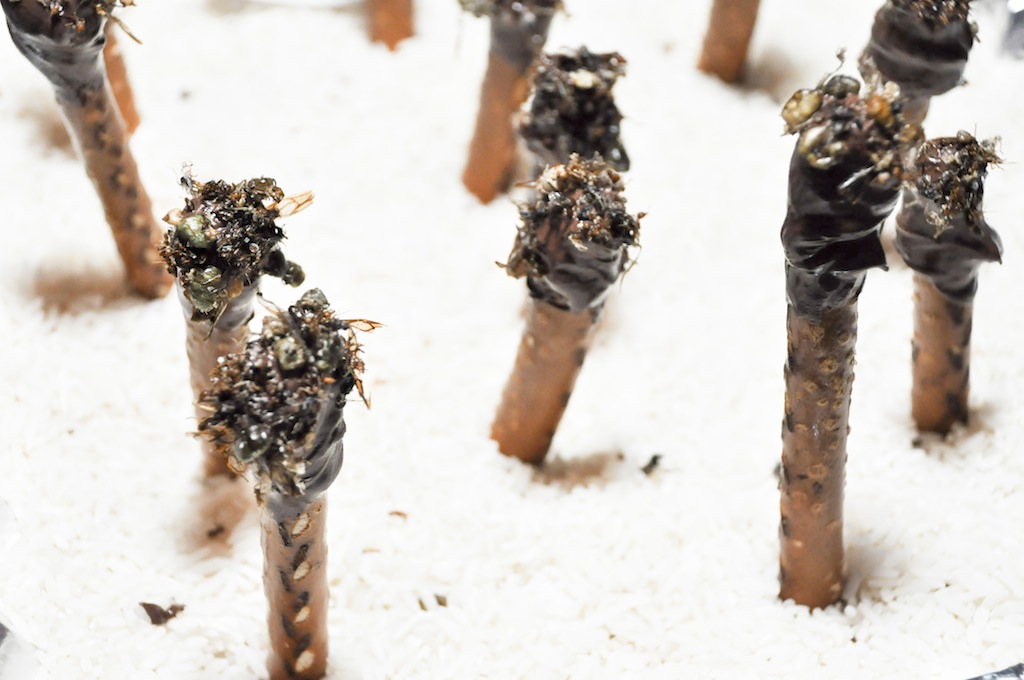 I can give statistics all day long, but in the end, I know you’re going to ask, “Why even bother?” The United Nations put out a report earlier this year stating that insect consumption could help resolve world hunger.  Most of our protein sources are inefficient, and with a population of 7 billion people and growing, the world is running out of room and fresh water. Farming insects for food requires little space or water needed to produce large numbers. This could cut down on water consumption and land needed for agriculture.

Oh, and contrary to most western belief, most edible insects are quite tasty!  Dave Gracer, Advisor for Insects Are Food, gave a great description covering many types of leggy edibles: “Dry-toasted cricket tastes like sunflower seeds; katydid like toasted avocado; palm grub like bacon soup with a chewy, sweet finish. Weaver ant pupae have practically no flavor, while the meat of the giant water bug is, astonishingly, like a salty, fruity, flowery Jolly Rancher.”

Oh, and if you are a wine connoisseur, there are several great blogs and articles about which wines to pair with your creepy cuisine.

Thanks, Lauren!  I am going to cook insects ALL the time!

I am sure by now I have convinced you … well, maybe one of you. But if you are interested in learning more or purchasing your own edibles, get started right here! There are tons of great websites, blogs, and even cookbooks. 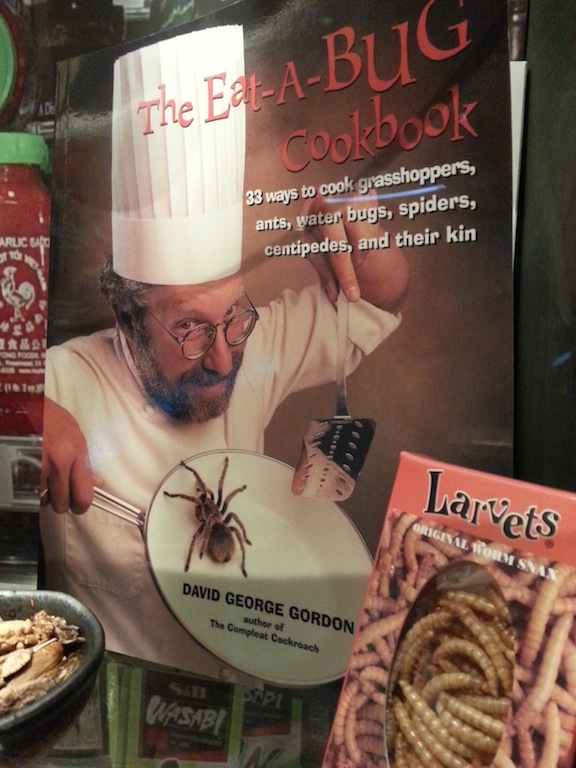 Links to Cookbooks, Recipes, Wine Pairing, and Other Info:

Wine Pairing:
“Eight-Legged Treats and the Wines to Match”
“What Wine Goes With Cicadas”

Keep Learning!
The Yellow Mealworm as a Novel Source of Protein, by A.E. Ghaly and F.N. Alkoaik
“The Lepsis is a Terrarium for Growing Edible Insects at Home!”
“For Most People, Eating Bugs Is Only Natural” 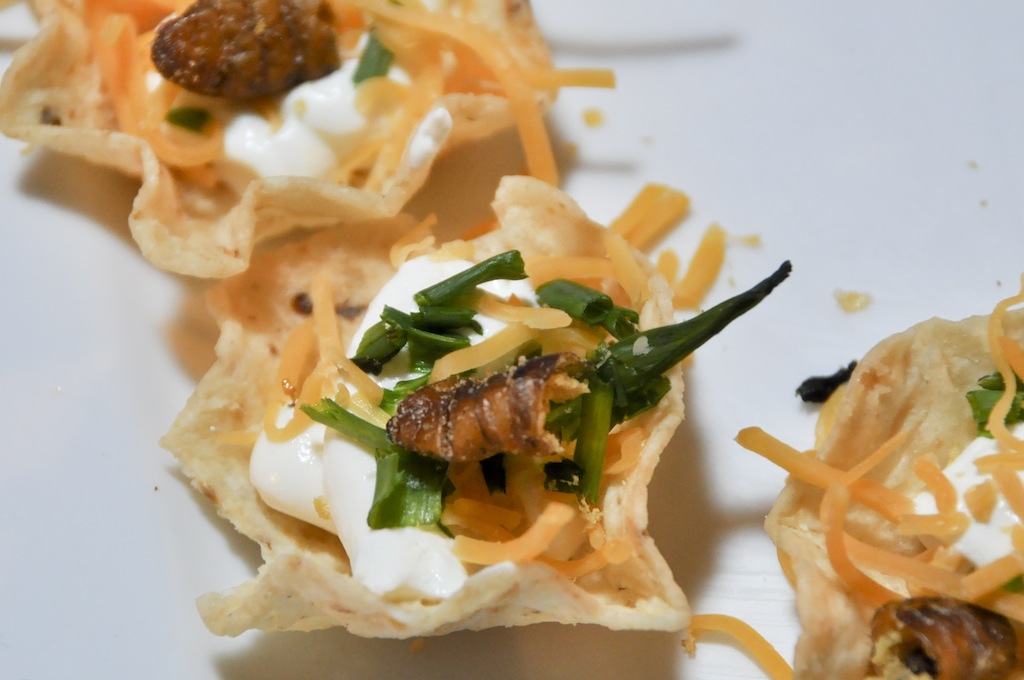 And, if you want to celebrate National Chocolate-Covered Insect Day the right way, see the recipe below or stop by the Butterfly Center for pre-made noms in the vending machine!

Directions:
Melt the chocolate chips according to packaging. Drop in a handful of crickets, stirring them around. Scoop them out with a spoon, and place them on wax paper, keeping them apart from one another. Continue until all the crickets are covered. The chocolate will harden overnight, but if you prefer you can freeze them for about an hour and they will be ready to eat shortly thereafter. Once hardened, the crickets can be stored in a container for future use.

Did we mention that we’ll be serving up yummy cooked bugs at Spirits & Skeletons (our happenin’ Halloween party) on October 25? Let the people who know the delicious delicacy best make a tasty, crunchy snack for you. 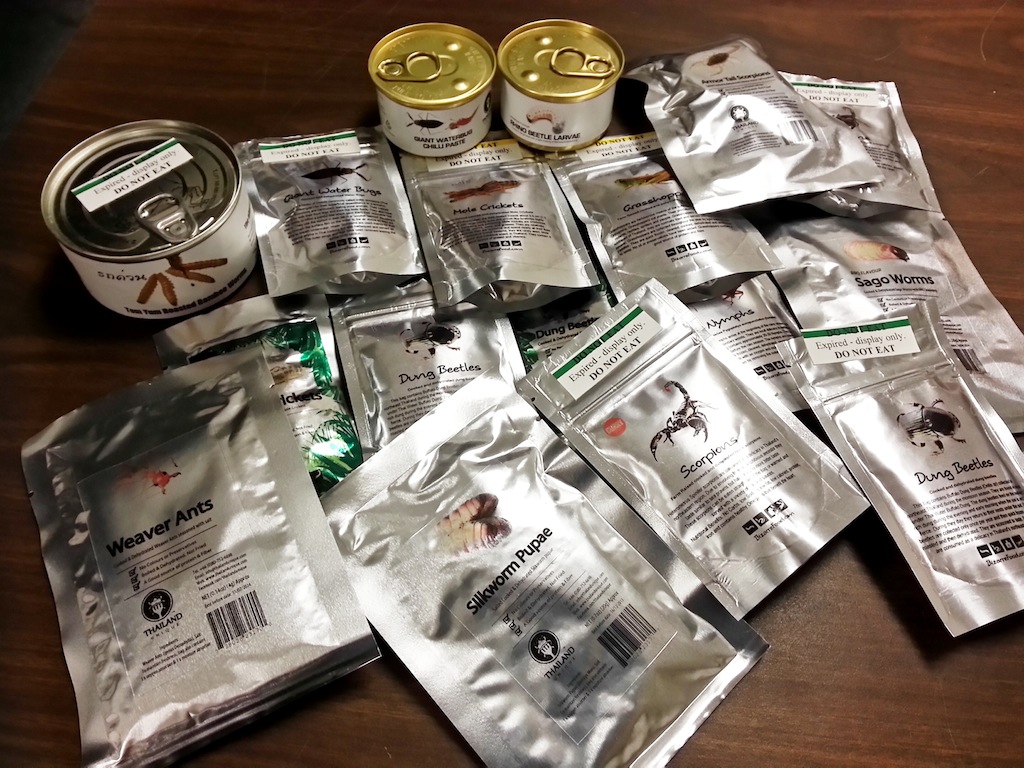 Lauren is an entomologist in the Cockrell Butterfly Center.

Previous Post
The heart of the world: The star of Jerusalem 3D talks about her hometown and seeing herself on the Giant Screen for the first time
Next Post
Turning the tide on power: Could we get energy from the Moon?