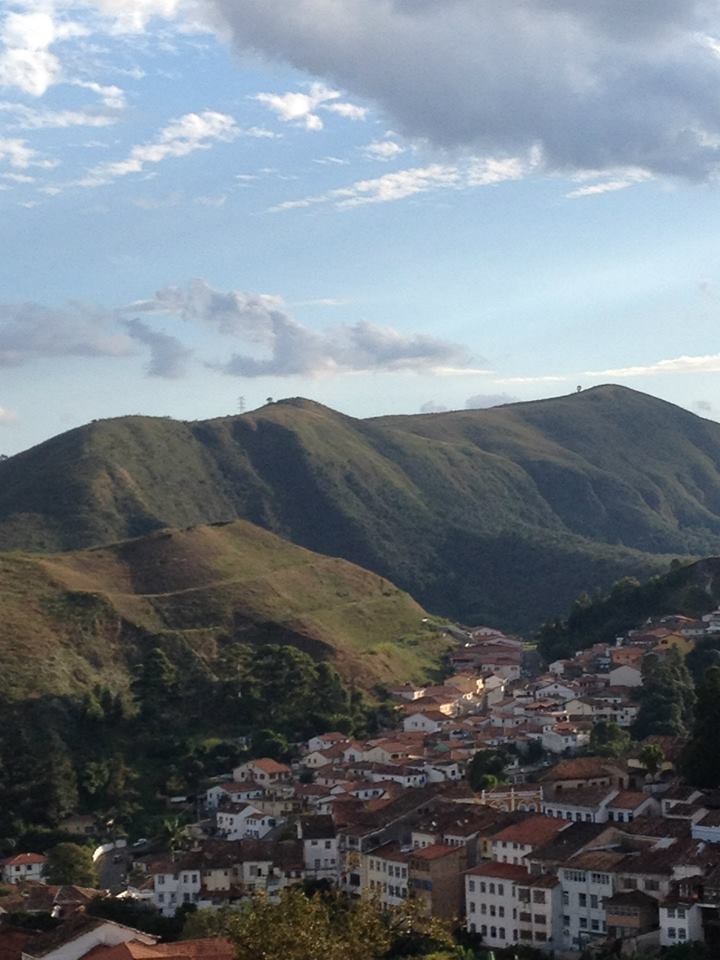 The city of Ouro Preto, “Black Gold.” It was the largest City in Latin America in the 18th century during the Brazilian gold rush. Today the city is famous around the world for its preserved Baroque architecture.

Brazil is a beautiful country, but not in the same way as the Florida Keys, Hawaii, or Aspen. Everywhere in Brazil you have a wonderful dichotomy between the grotesque and the graceful. The entire country is like an impressionist painting — up close you see sloppiness and imperfection, but if you stand back, all of the colors and textures come together to create a stunning portrait, a portrait based in reality, not contrived. Throughout my July 2015 trip through the state of Minas Gerais, in the mountainous interior of Brazil, I had been awed by the natural beauty of the country, and also with the artificial splendors. I was always amazed by what people who have so little can create with what they do have. 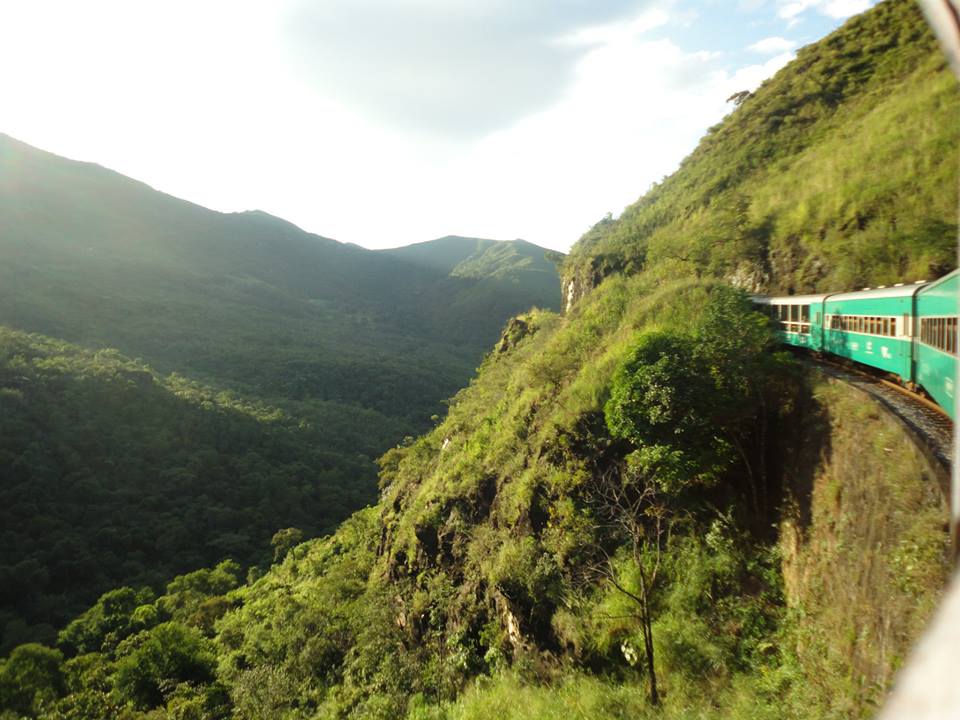 The scenic train ride to the city of Mariana, where the mine museum was. Minas Gerais is famed in Brazil for its natural beauty.

I was basking in the adrenaline and the charm of exotic travel, but the grotesque crept back into my perception as I sat in a rickety old mine car, suspended above the mouth of a mineshaft on a track with a forty-five degree slope. The rusted mining equipment and dilapidated offices and supply sheds had blended nicely with the mountainside when I first viewed them from across the valley during the train ride over, but up close it was less than dazzling. The only thing keeping us from sliding hundreds of feet into the earth was a steel cable hooked up to a winch probably as old as my grandfather. There were no seat belts in the cart, and the angle of the tracks was so steep, I had to press my feet against the seat in front of me to keep from sliding off. There were no other people visiting the mine — it was only Fernanda and I — and I couldn’t help but wonder if there was a sinister reason for that emptiness. I was a bit nervous as the little old lady manning the craft announced in Portuguese that we were about to descend, but then the buttons were pressed, the car slipped slowly and smoothly into the darkness and it wasn’t that bad. 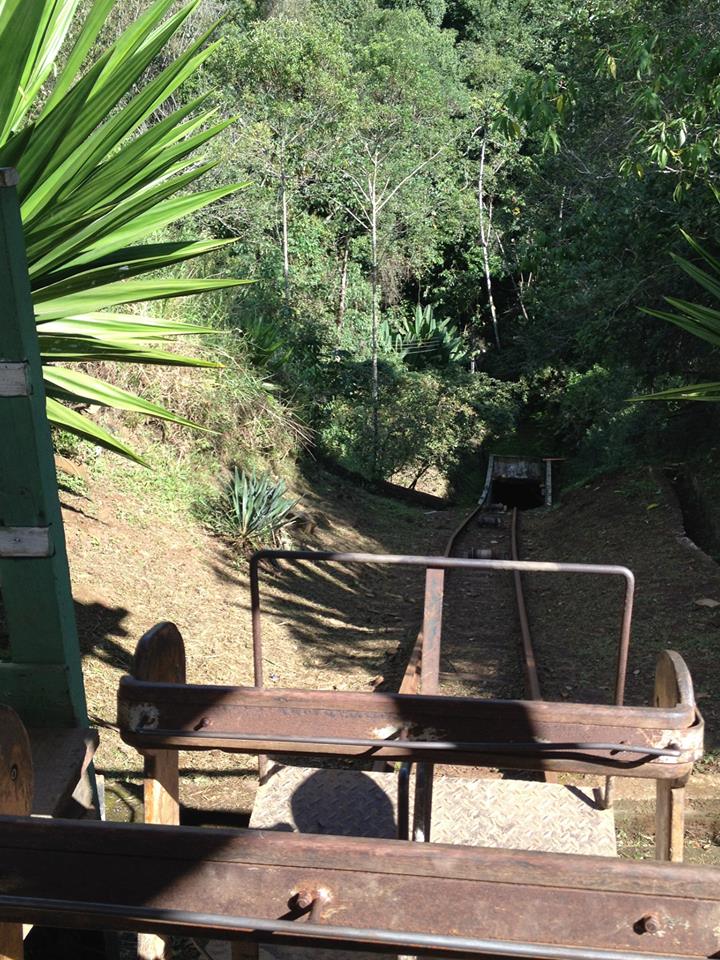 he entrance to the mine. Until only a couple decades ago, miners would make this descent every day.

The trip down was noisy. The wheels of the cart screeched against the steel tracks, and every once in a while the cart would jump on a connection between two rails and snap back down loudly. The sound would bounce off the solid stone walls around us and pound our eardrums. The shaft was dark. Lamps, bare bulbs budding from a ragged wire that crept like a vine along the walls of the shaft, emitted a honey-colored glow that lent the place a very intimidating and volcanic atmosphere. But it was actually quite cool down there. The earth insulated us from the sun up top; we were no longer subject the conditions on the surface. 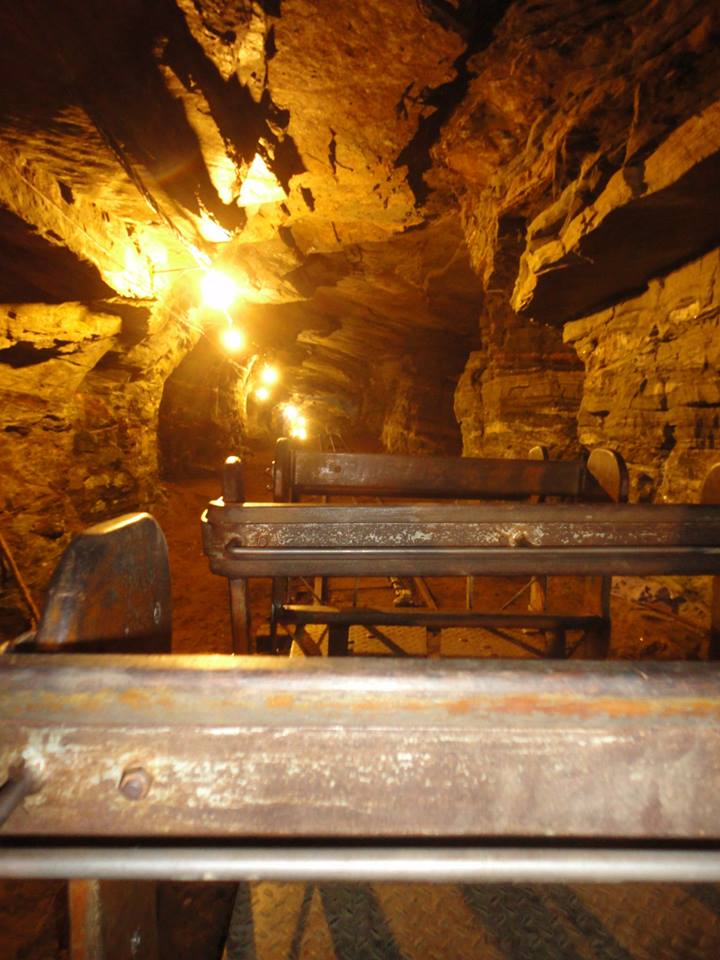 Our descent into the Earth in a simple old cart that used to ferry the miners down to their work.

Beside us, embedded in the rock walls of the mine, ran a sliver of milky white quartz. The shaft followed it until we reached the bottom of the mine. At the bottom, the path flattened out and the rails ended. Men were laboring with shovels, loading rocks into a pile for transport back to the surface. The mine was not active anymore; these were simply employees of the museum that owned the mine clearing debris for the safety of the guests. Their store-bought, not-too-dirty clothes belied their fortunate position as men who did not permanently work in a mine. Still, they looked tired and unhappy, and generally ignored our presence, which I don’t blame them for. I have often said that I can do physical labor or customer service, but not both. 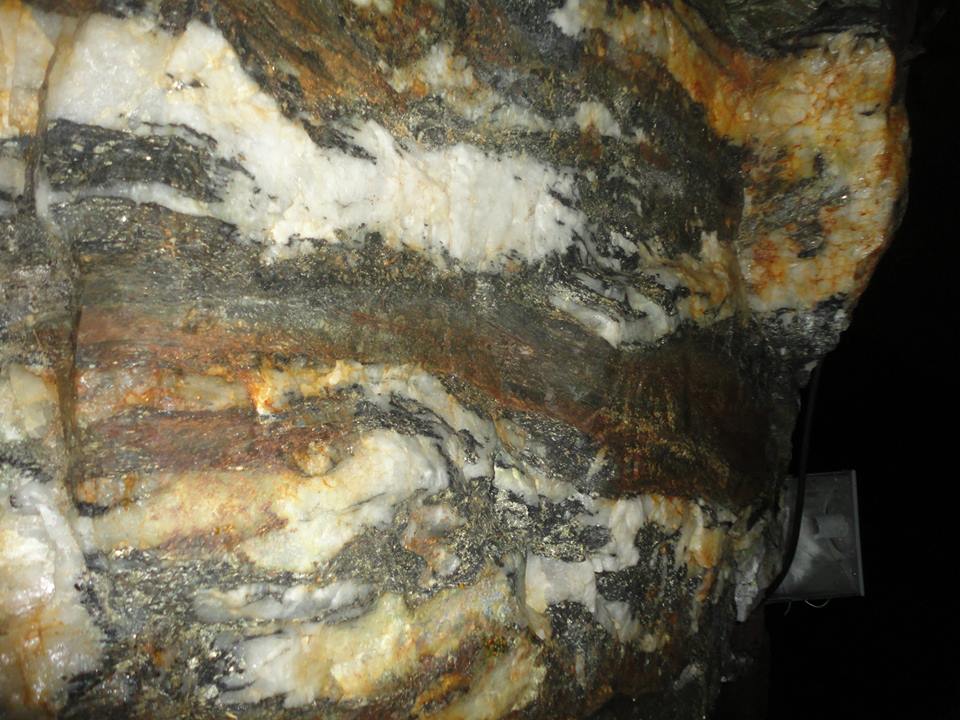 Milky-white bands of quartz running through the stone walls of the mine.

The vein of quartz that we had followed down was thicker at the bottom of the shaft.  Here it became apparent that it was not just a small sliver of quartz we had seen, but a thin cross-section of an entire layer blanketing the Earth for who knows how far in every direction. Originally, it would have formed as a flat layer, but like a massive, restless sleeper, the Earth had shrugged its silvery blanket during bouts of tectonic activity. The quartz layer had been folded into the Earth’s crust, resulting in a slumped, angled descent beneath the surface. This is why the mine goes so deep. It follows the descent of the quartz vein. The Portuguese had mined near the surface in the 18th century, but with their limited technology, they didn’t go very deep. The shaft we visited was dug much more recently. 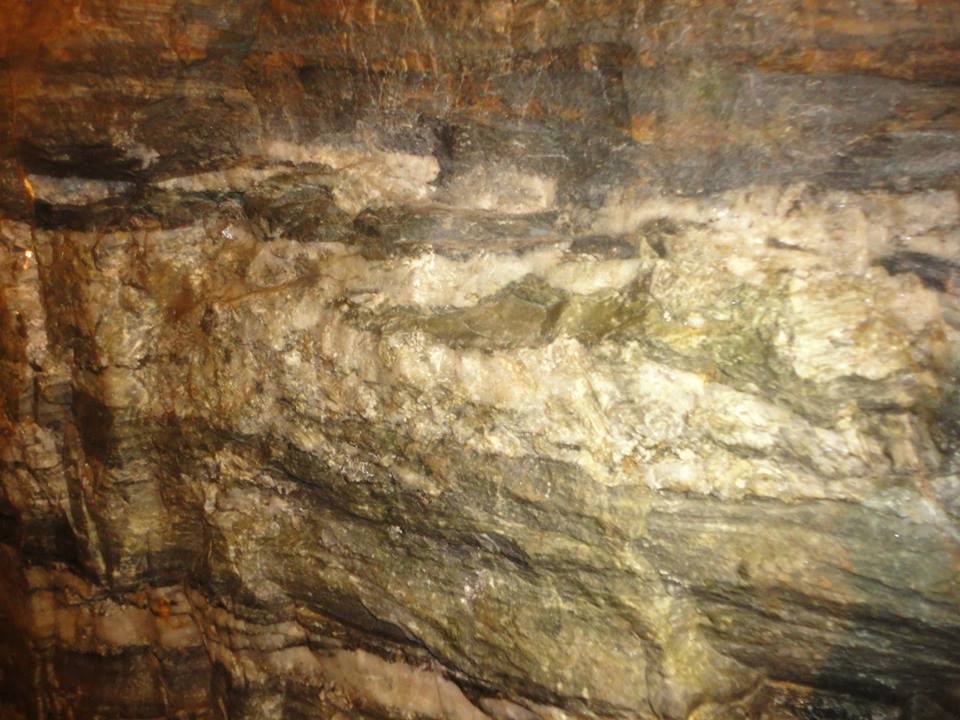 Bands of quartz, along with other minerals, lined the walls.

The mine wasn’t a quartz mine. The reason this vein was so important is that very often gold is found in quartz. Down in the mine, we could see no gold, but it was there, trapped in the quartz. The mining companies had cleared the shafts with explosives, creating a maze of passages spreading in all directions. To keep these shafts from collapsing under the millions of tons of sediment above, they left columns of rock standing, like pillars in an Egyptian temple, throughout the galleries. Like the walls of the mine, these pillars had diagonal layers, alternating between rock and quartz, like a layered cake. In these columns, quartz and gold still rested, impossible to get to without collapsing the mine. 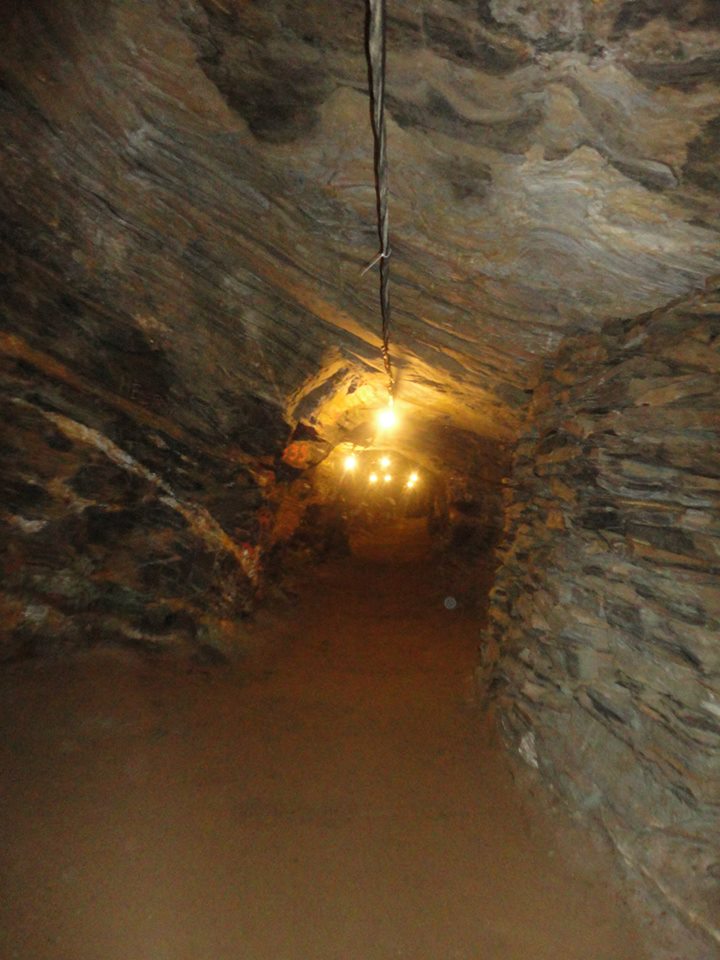 At the bottom of the mine, passages like this one meandered in every direction. There were some passages that went deeper, but those had been flooded.

And although the gold itself was invisible, pyrite (fool’s gold) was everywhere, so in places the mine shafts really did look like they were covered in gold. There were also tourmaline and garnet, a menagerie of natural splendor, though none of them were of gem quality. The good stuff would have been plucked out and sold. Museums around the world buy specimens from Minas, even our museum. A notable portion of the pieces in our Cullen Hall of Gems and Minerals came from the region. Our hall is what inspired me to travel there in the first place. Our great collection of gold does not come from Minas, but like the mine I visited, our gold was found in quartz veins. We have a wonderful, natural gold “sculpture” called “the dragon,” a sliver of gold that actually looks like a rearing reptile with spread wings. We have other pieces of gold in all sorts of abstract, contorted shapes as well. Since gold doesn’t grow (unfortunately), the way it acquires these weird forms is by being trapped in quartz. As the quartz grows, it manipulates the gold inside into all sorts of interesting shapes. So originally our gold was trapped in quartz crystals, and was extracted by dissolving the quartz in a mild acid that does not harm the gold. A similar process is used to extract gold from quartz in mines like the one I visited. 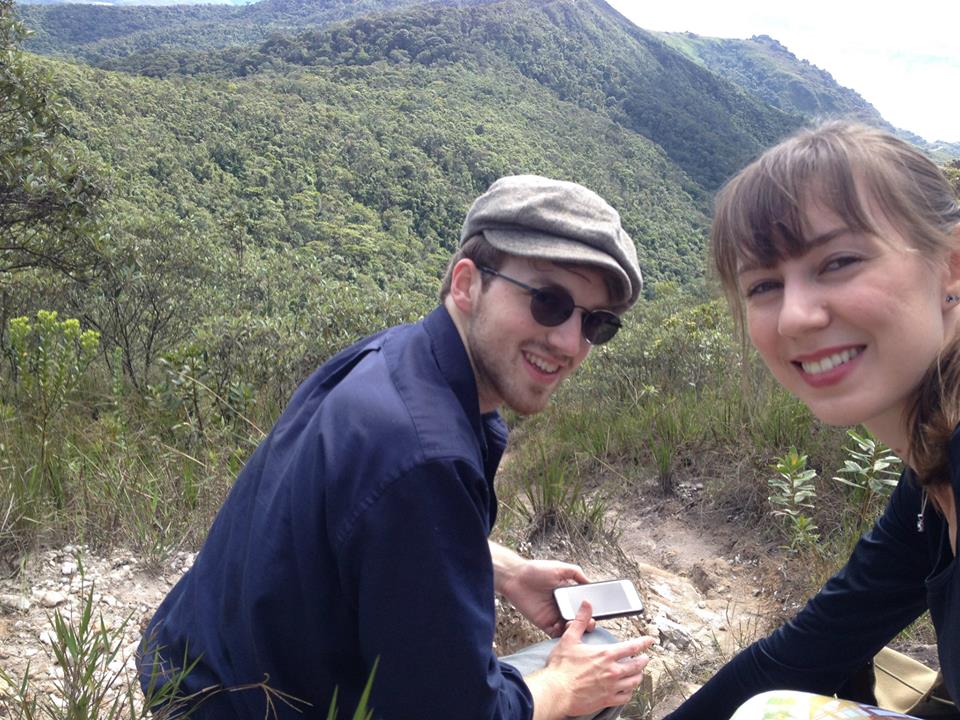 Fernanda and I, overlooking the valley.

Editor’s Note: “Cretaceous” Chris is a Discovery Guide for the Houston Museum of Natural Science.

Previous Post Peale-ing Back American History: the Life of Charles Willson Peale and his Cabinet of Curiosities
Next Post Mark Your Calendars for these events happening at HMNS 5/2-5/8

Our Wands May Not Be Magic, But They Sure Are Pretty!

Museum guests who find their way into the Cullen Hall of Gems and Minerals usually have no trouble finding something to be in awe of. Passing through the Hall on my daily rounds, while looking for new hidden gems to spotlight, I rarely make it further than a few feet from the entrance before I […]