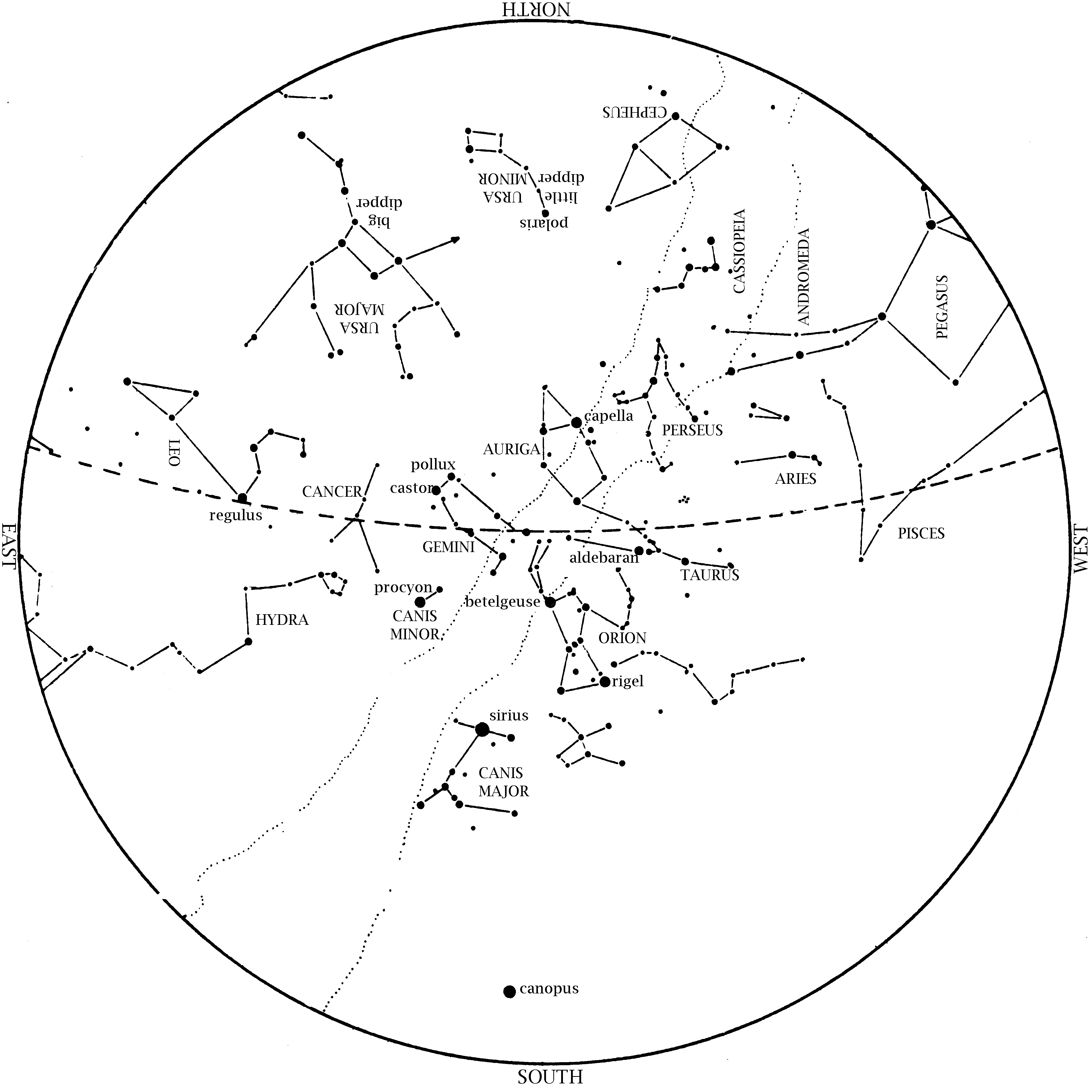 Jupiter is now a late evening object, rising in the east. It rises by 9 p.m. on Feb. 1, and by Feb. 29 it comes up just before 7 p.m., which is during evening twilight. Jupiter comes to opposition on March 8, which is when Earth aligns with Jupiter and the Sun. That is why Jupiter is up all night long in late February and early March.

As dawn approaches this month, Jupiter will still be visible, this time high in the west.  Meanwhile, the four other visible planets will have risen as well. That’s right, February 2016  features all five naked-eye planets at dawn!

Venus is in the southeast at dawn. You can’t miss it, as Venus outshines all the stars we see at night, and in fact outshines everything but the Sun and the Moon.

Mars is in the south at dawn. Noticeably reddish in tint, Mars continues to brighten each day until its opposition next spring.

Saturn is in the south southeast at dawn, above the distinctive pattern of Scorpius, the scorpion. Mars slowly approaches Saturn this month.

Mercury is the biggest challenge to find. This month, though, Mercury is very close to Venus and to its left. Thus, once you find Venus, the brightest dot to its left is Mercury.

Mercury is the first planet to leave the gathering as it heads back towards the Sun late this month. The cutoff date of Feb. 20 is somewhat arbitrary, though. It’s better to watch the sky and, using Venus as your guide, see for yourself when is the last day you can still see Mercury before losing it the Sun’s glare. The next to leave is Jupiter, which shifts into the evening sky after opposition.

Taurus, the Bull, is high in the south. Look for the Pleiades star cluster above reddish Aldebaran. Dazzling Orion, the Hunter, takes center stage on winter evenings.  Surrounding Orion are the brilliant stars of winter. Orion’s belt points down to Sirius, the Dog Star, which outshines all other stars we ever see at night. The Little Dog Star, Procyon, rises with Sirius and is level with Orion’s shoulder as they swing towards the south. To the upper left of Orion’s shoulder is Gemini, the Twins.

Under Sirius and low to the southern horizon this month is a star that most Americans never get to see—Canopus. Representing the bottom (keel) of the legendary ship Argo, Canopus is the second brightest star ever visible at night. Thus, it is clearly noticeable along the southern horizon on February and March evenings. However, you must be south of 37 degrees north to see Canopus rise. (This is the line that divides Utah, Colorado, and Kansas from Arizona, New Mexico, and Oklahoma.)

The sky we see depends on our latitude as well as on the time of night and time of year.  From any given location in our hemisphere, there is an area of the sky around the North Star in which stars never set (circumpolar stars), and an equivalent area around the South Celestial Pole in which stars never rise. The closer you are to the pole, the larger these areas are. The closer you get to the equator, the fewer circumpolar stars there are, but there are also fewer stars that never rise for you. At the equator, no stars are either circumpolar or never visible; all of them rise and set as Earth turns.

(February is so short that last quarter Moons occur on Jan. 31 and March 1, but not in February).

The New Moon of Feb. 8 is the second New Moon after the winter solstice. Accordingly, it marks Chinese New Year. Welcome to the Year of the Monkey!

Monday, Feb. 29, is leap day. This day exists because our normal year of 365 days is too short. The true length of one Earth orbit around the Sun is 365 days and almost 6 hours.  No one wants to begin a year in the middle of a day, however. Therefore, we let the error add up over four years, until it becomes 24 hours, or one whole day, then add that day back to the calendar. Thus, February 29 occurs every four years.

Almost 6 hours?  Well, alright, the difference between our orbit and our year is actually 5 hours, 49 minutes, and 16 seconds. That makes our system a very slight overcorrection.  To prevent that from adding up, we’ll skip leap day in 2100, 2200, and 2300.

Previous Post Mark Your Calendars for these events happening at HMNS 2/1-2/7
Next Post Making the Stars: A Brief History of the Burke Baker Planetarium