Whether they’re toys that shine in the night, black lights, glow sticks or fireflies, things that produce an eerie glow are fascinating. Give a kid a glow-in-the-dark toy or paper her ceiling in dimly shining plastic stars, and she will be occupied forever. She’ll find ever brighter lights to charge them up, ever darker places to view them for maximum glow effect, and generally love exploring how it all works.

You know this; you were that kid. So what’s the deal with the glow? 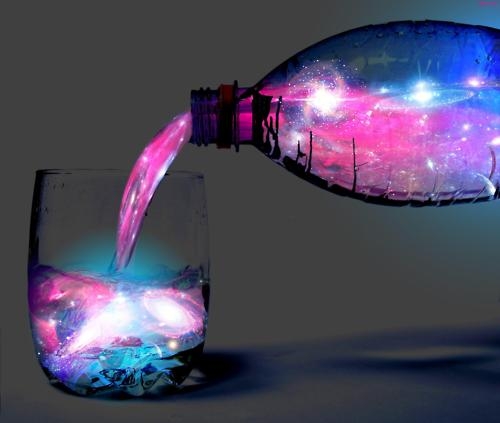 It’s 10 p.m. Do you know where your electrons are?

While there are several “flavors” of things that glow, they all have something in common: Things glow because photons are emitted when “excited” (at a higher energy state) electrons drop back to a lower, more stable state. Aside from promising them a pony or a tour of CERN, there are several ways to get your electrons excited.

In chemical glow sticks, a chemical reaction excites the electrons. This process is called chemiluminescence. Glow sticks are an excellent way to experiment with reaction rates and temperature. If you want the reaction to last longer, follow a kid’s advice and put the glow stick in the freezer or in ice water so the reaction slows down; it’ll take longer to use up the chemicals in the glow stick. The trade-off is that because the production of photons is also slower, a cold glow stick is dimmer than a warm one.

Fluorescence is like light recycling. Fluorescent rocks, laundry detergent additives, paint, and even some animals can re-emit light after something shines on them. Usually we’re talking about things getting hit with ultraviolet or ‘black’ light and re-emitting within the visible spectrum. This makes sense because as you progress along the spectrum of electromagnetic radiation, visible light is a bit lower in energy than ultraviolet light — you can’t expose something to lower energy red light and get it to fluoresce in UV, for example. Fluorescent things certainly fluoresce in daylight, but not enough to outshine the ambient light, so they’re most noticeable under a black light in an otherwise dark space.

Phosphorescence is a lot like fluorescence but stretched out over time — a slow glow. So you can shine light (visible or UV) on a glow-in-the-dark star and it re-emits light, too, but over a lot more time, so the glow continues for minutes or hours before it completely dies out. If you have a glow-in-the-dark toy or T-shirt, try “charging it up” with lights of different colors or intensities and checking out the glow that results.

Fireflies produce and use their own chemicals, luciferin and luciferase, to dazzle and attract potential mates — and sometimes to lure prey. A surprising number of marine critters are bioluminescent, too, like dinoflagellates (plankton) that glow when disturbed, the angler fish, and some squid (perhaps they are blending in with starlight from above). Headlines occasionally announce a new genetically engineered “glowing” kitten, rabbit, plant, sheep, etc., but they are almost always talking about fluorescence instead of bioluminescence, so the light is only seen when the animal is placed under ultraviolet light. (One useful application of this is the ability to track a protein related to a certain disease by getting the introduced gene for Green Fluorescent Protein (GFP) to link to the gene for the protein of interest). Some animals like scorpions and jellyfish (the original source of GFP) fluoresce naturally.

Sugar and adhesives can exhibit triboluminescence, in which friction or fracturing produces the light. This one is great to try out at home; you just need Wint-O-Green Lifesavers®, transparent tape and a very dark room (a buddy or a room with a mirror is helpful for the Lifesavers portion). Dr. Sweeting (that’s her real name) has more detailed instructions and explanation, but the big idea is that a tiny, but visible, amount of light is emitted when you peel tape off the roll and when you bite into the candy, crushing sugar crystals against each other. The wintergreen oil even improves the effect by fluorescing!

Just can’t get enough? Make sure to come early for the educational portion of HMNS’ LaB 5555 this Friday for more GLOW fun, and learn all about the science of what gives things light. I’ll be there doing demos to light up your night. For tickets and more info, click here!

Previous Post
Have a chemical Christmas with these chemistry-themed holiday crafts
Next Post
Give your family some space — outer space! — at Family Space Day this Saturday By Kim Vera, Membership Copywriter   The year is coming to a close and we are looking forward to 2018. In case you missed out, here’s a recap of the fun Member events we had during the previous months. Stay up to date with HMNS by subscribing to our weekly Member newsletter and following […] HMNS hosts all sorts of incredible events. From company Christmas parties to Weddings and kid’s birthdays; we do it all! And we have a great group of caterers on call to help “sweeten” the deal. In honor of the end of summer, some of the guys and gals from A Fare Extraordinaire have thought up an […]