During a recent planetarium show, I discussed the stars of the Summer Triangle (up all night long in summer, they are still high in the west at dusk in autumn). I mentioned that Deneb, apparently dimmer than the Triangle’s other two stars Vega and Altair, is actually much larger and gives off much more light. It just seems dimmer because it’s about 100 times farther away. This prompted the question, “How can we tell how far away the stars are?”

This is a very perceptive question.  We obviously cannot directly measure the distance to a star like you might measure the height of a wall.  Neither can we use an odometer like you have in your car, since no one has been to the stars.  By doing a little trigonometry, however, we can get reliable distances to the stars nearest to us.

This geometric way to measure distance is called parallax and you can illustrate it for yourself quite simply.  Hold your finger in front of your face.  Now close your left eye, leaving the right eye open.  Then close the right eye and open the left.  Repeat this sort of blinking several times and watch how you finger moves back and forth compared to things in the background.  Bring your finger close to your face, and repeat the experiment.  Now hold your finger at arm’s length, and repeat.  Notice how your finger seems to move farther when it is close to your face.  In fact, if you could measure how far your finger moves against the background objects, you could calculate how far it is from your face.

We can do the same thing with nearby stars. If we observe a star at a particular time of year (for example, in January) and then again six months later (in this case, in July), we can define an isosceles triangle where the base is the diameter of Earth’s orbit and the sides are the distance to the star.  The vertex angle of this triangle equals the apparent change in the star’s position due to the Earth’s yearly motion.  One half of this isosceles triangle is a right triangle where one leg is the known Earth-Sun distance (one AU, or astronomical unit), and the hypotenuse is the distance to the star. The angle opposite the one AU leg, which is one half the star’s apparent motion, is the parallax angle p.  Basic trigonometry then yields

where d is the distance to the star in question.  Since p is tiny for all stars, the small angle approximation sin p =p is valid.  We can define a standard distance by asking how far away a star would be if it had a parallax of one arcsecond (1/3600 degree).  Plugging d= 1 arcsecond into the equation gives us

where 206265 represents the conversion factor between radians and arcseconds, given that the approximation sin p =p holds only if the angle is in radians.  We have now defined the parsec, the distance at which a star has a parallax angle of one arcsecond.  It now becomes easy to determine stellar distances compared to this standard distance.  First, measure the parallax of a star in arcseconds.  Then take one over that value, and you have the distance to that star in parsecs.  By the way, although the general public prefers to think of distances to stars in light years, modern astronomers never quote them that way.  The parsec, directly related to a measurable quantity, is a much more preferable unit.  (One parsec is about 3.26 light years.)

This way of measuring distance has a limitation: most stars are too far away to have measurable parallaxes.  An imaginary sphere with a radius of one parsec centered on our Sun would contain precisely one star–the Sun.  The nearest star system to ours, that of Alpha Centauri, is 1.34 parsecs away, and therefore has a parallax of only about 0.75 arcseconds.  More distant stars have much smaller parallaxes, too small for most Earth based equipment to detect.

This began to change in 1989, however, when the European Space Agency (ESA) launched the High Precision Parallax Collecting Satellite, or Hipparcos.  The name was chosen in honor of the ancient Greek astronomer Hipparchus, who put together the first star catalog of the western world.  The first space experiment devoted to astrometry, Hipparcos catalogued 118,218 stars between 1989 and 1993.  The Hipparcos Catalogue was published in 1997.  Among its many scientific results, Hipparcos helped astronomers determine accurate proper motions (a star’s true motion through the galaxy) and was able to measure good parallaxes for stars up to about 1,000 parsecs away. 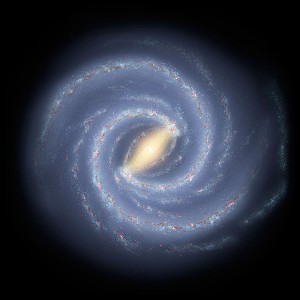 But, you may wonder, “What about stars more than a few thousand parsecs away from us? ”  Keep in mind that our Galaxy is about 100,000 light years, or just over 30,000 parcsecs across.  Most stars, to say nothing of distant galaxies, are so distant that not even Hipparcos can measure their infinitesimal parallaxes.  Fortunately, there are objects known as “standard candles”–celestial objects with a known intrinsic brightness.  Comparing their intrinsic brightness with their apparent brightness in our skies lets us figure out the distances to them.  In a later post, I’ll discuss how we identify and use “standard candles” to determine distances to much more distant stars and even to other galaxies.