I like pirates.  I am not going to lie.  Maybe it is the bad boy effect I have heard so much about on the covers of newsstand magazines.  Or perhaps, it is all the GREAT history you can learn while you aren’t looking! Either way, get excited now because we are hosting “Real Pirates: The Untold Story of the Whydah from Slave Ship to Pirate Ship.“ 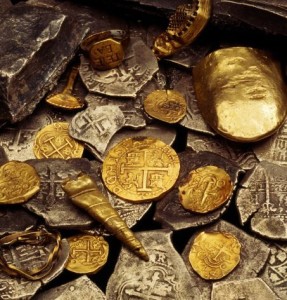 Spanish reales. Part of the treasure recovered from the Whydah.

What makes pirates so cool?  Well, it isn’t how they made people walk the plank (because they didn’t), and it isn’t how they buried their treasure (because they didn’t) and it isn’t because they were the fiercest crews on the seas (okay this one is true).  Rather, the truth is stranger than fiction and that gives them a certain appeal. Their conduct during the Golden Age of Piracy, around 1650 to 1720, also gives you an amazing inside look at global politics and policy decisions at the time.

Most of what people today know about pirates comes from the movies, like Pirates of the Caribbean or The Goonies, but when it comes to accuracy these movies are more swishbucklers than swashbucklers.  In fact, most of what we think we know about pirates is based on works of fiction, like Treasure Island by Robert Louis Stevenson, and like any good work of fiction, it doesn’t let the facts stand in its way.

Generally, pirates were a democratic bunch, with crews of every race, nationality and social status, but whose members were judged on their abilities, not their affluence.  They had a solid business plan and opportunities for advancement within the company. And my favorite, they had disability insurance for the crew.

Now there were a few bad apples that spoiled the bunch (and you know who you are… Blackbeard), but overall they conducted themselves in remarkable egalitarian way and were much beloved by the colonists who might find themselves in possession of goods from the continent and a significant discount through the good graces and skills of said pirates.

There is so much to say that one blog simply can’t do it all, so stay tuned for future blogs.  And now I leave you with a joke, courtesy of a cherry Laffy Taffy wrapper:

What is a pirate’s favorite vegetable?
The arrrrh-tichoke of course.

Don’t miss your chance to see Real Pirates: The Untold Story of the Whydah from Slave Ship to Pirate Ship  for a limited time, only at HMNS.