Today’s guest blogger is Neal Immega. He has a Ph.D. in Paleontology and is a Master Docent here at HMNS. In his post below – originally printed in the Museum’s volunteer newsletter – Neal discusses the lessons that can be learned from Puabi, Pharaohs and Peter Carl Fabergé.

I sometimes think that I can surely produce objects that are superior to those on display in our halls. After all, my technology has to be superior because it is thousands of years more recent and that should make up for my lack of training in whatever skill is being used. I do get commissions to produce “Nealafacts,” things for the touch carts that mimic ancient originals. I fancy that my copper chisel would please a workman on Pharaoh’s tomb, but what about more difficult things? I can just see my father, raising one eyebrow at me, as if to say “Can you do it?” 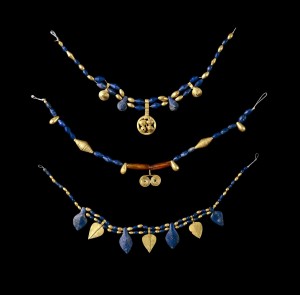 The exhibit “Royal Tombs of Ur” contained drilled agate beads, some more than 2 inches long and with walls about a millimeter thick. I fancy myself an expert in making jewelry from agate but I would have trouble drilling thin-walled beads like those even with sintered diamond tools. The craftsmen from Ur accomplished this task 4,500 years ago!

In the “Birth of Christianity” exhibit there was a limestone drinking cup that appeared to have been turned on a lathe, except that its handle stuck out and would have gotten in the way of the turning process. In the Egyptian exhibit that used to be on the first floor, there was a pot (borrowed from the Menil Collection) that was made out of hard igneous porphyry. It also looked like it had been turned on a lathe but, this time, it had hanging lugs would get in the way. I wonder how they did that?

My most recent humbling experience comes from the Fabergė exhibit.  One signature Fabergė technology is transparent enamel over patterned metal. The process used to draw the swirling lines on the metal is called guilloche after the gentleman who created the process in order to make banknotes hard to counterfeit. The process uses gears that run inside of other gears to make the pattern – you can readily see the mechanism if you look at the modern toy called a Spirograph. Select a toothed wheel, a toothed circle for it to run in, and a position inside the toothed wheel for your pencil and, wow! you get perfect mathematical loops. If you used a cutting tool, you could mark the engraving plate used to print bank notes or stock certificates. Though the US Mint probably has a much better ruling engine (because it draws on printing plates) the process is the same.

Marking up bank note printing plates is comparatively easy compared to ruling this little egg.  This is because it has the pattern turned all the way around it, above and below it. I bet there is a pattern follower that can track about an object but I do not know.

The engraved surface on the egg has been enameled:  covered with ground up glass and metal oxides, all melted together. The Faberge factories were famous for the fancy colors they could produce. Ladies of the court would have dresses made to complement the new colors. I suppose it just would not do to clash with your cigarette case color. The large number of colors (maybe 170) made it possible for the factory to claim that each object is unique.  The Fabergé craftsmen used transparent but colored enamels to allow the fancy guilloche patterns to show through. 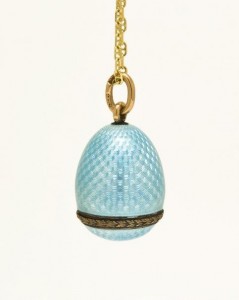 I guess it is a bit retro to be using machines built in 1920, but the results are fabulous. Almost no one but the high end watch companies still use them because it can take an engraver many hours to do a watch face. Embossing a finish on metal with a hydraulic press is a much more common technique. If you need to do better, computer-controlled milling machines are now priced within the range of many shops (say $20,000) . We might expect to see some really new designs from these in the future.

Want to try your hand at guilloche? There is an interactive site where you can vary all the parameters and produce the most amazing patterns in real time. This is what I wanted – the ability to create an infinite number of patterns without the cost of carving them into metal. The only problem is how to transfer the pattern on to metal, but that is a problem for a 21st century Fabergé shop.

I think my father would be pleased with my discovery that there are no shortcuts to producing quality work. A craftsman today might have better tools than someone in the past, but skill does seem to trump technology.

Rats, I guess there are no easy solutions.

Rights to use Puabi beads photo.

Discussion on the technique of creating Faberge designs

A nice photograph of a ruling engine.