This description is from David, the museum’s associate curator of paleontology. He’s chosen a selection of objects that represent the most fascinating fossils in the Museum’s collections, that we’ll be sharing here – and on www.hmns.org – throughout the year. 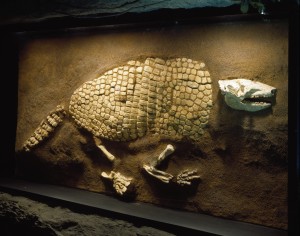 The armadillo is an iconic animal in Texas, and this relative of the smaller, modern forms takes “Texas-sizing” to the extreme. This species, commonly known as Giant Armadillo, would have been nearly 6 feet long and weighed nearly 500 pounds. Like its modern cousin, this ancient animal was an immigrant to North America from the south, slowly migrating northward and subsisting of a diet of mostly plants and perhaps insects. The giant armadillo roamed and rooted along the Gulf Coast and as far north as southern Oklahoma, but disappeared about 10,000 years ago.

The Museum’s Giant Armadillo is a Houston fossil, discovered in 1955 by Florence Dawdy, a teacher, with her school age son and a friend near the old Scott Street Bridge on Brays Bayou.  Her family’s curiosity and concern about the fossil brought the find to the attention of the geology department at the University of Houston. This decision saved the fossil from further erosion or looting. UH students and volunteers excavated the fossil and provided the initial curation. It was described as part of a Masters Thesis at UH and then later published by Gideon James in the Journal of Paleontology, Vol. 31, No. 4, pp796-808, July 1957, An Edentate from the Pleistocene of Texas. 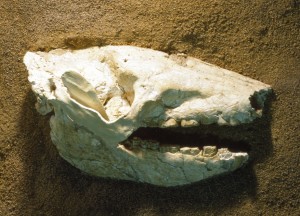 For over 30 years, the Museum’s Giant Armadillo was the best example of Holmesina septentrionalis known to science, and it is still one of the most complete.

The Giant Armadillo was given to the Museum by the University of Houston and was mounted by proceeds raised from the Museum’s 1991 armadillo-themed Guild Gala. The specimen was mounted in two dimensions as a plaque, so visitors would experience the fossil as it was originally found.

You can see larger and more detailed images of this rare specimen – as well as the others we’ve posted so far this year – in the photo gallery on hmns.org.