Ships named “Texas” have a grand history — just like the state. The first ship to bear the name came about when the United States realized it had less naval power than countries like Belize or Chile. The U.S. set out on a naval modernization program under the direction of then Undersecretary of the Navy Theodore Roosevelt, and built two modern battleships: the USS Texas (commissioned in 1895) and the USS Maine.

While the Maine became infamous for starting the Spanish American War in 1898, the “Old Hoodoo” — as the Texas was called — under the command of Captain John “Jack” Phillips, served well at the Battle of Santiago de Cuba. There, she was part of Commodore Schley’s “Flying Squadron,” a force of ships gathered to defend the Atlantic coast against any Spanish fleets making their way to our shore. The Spanish fleet bottled up in the bay made a daring run to escape the blockading American fleet. In a matter of hours, the Spanish ships were sunk or run aground, and the U.S. fleet suffered only two casualties.

This first Texas was decommissioned in 1911 so her name could be added to a new dreadnought battleship, Hull No. 35. Launched on May 18, 1912, a few days after another infamous ship sank, the new Texas (BB -35) had a distinguished career with many firsts. Before she even had a shakedown cruise, she was off to support U.S. troops during the “Tampico Incident” in Mexico before World War I. Under the command of Victor Blue, she ferried convoys across the Atlantic and protected main layers around the northern German coast during World War I.  She escorted President Wilson to the peace conference after the war.

During the intra-war years, she switched from burning coal to burning oil — a change that increased her range significantly and reduced the weight of the fuel she carried from 3,000 tons of coal to 400 tons of oil. She was the first battleship to have anti-air guns, launch a plane from her decks, and test radar. She participated in the landings in North Africa, the D-Day invasion, and the Battle of Okinawa, amongst others.

Since WWII, she’s been quite busy. In 1948, Texas became the first battleship memorial museum in the country. She currently serves as the flagship of the Third Texas Navy.

She also has an active acting career, playing the battleship West Virginia in Pearl Harbor. But I prefer when she plays herself in Letters from Iwo Jima and Flags of our Fathers. In the Ayes of Texas trilogy, she repeatedly saves the nation of Texas from the Soviet fleet. Way to go girl! 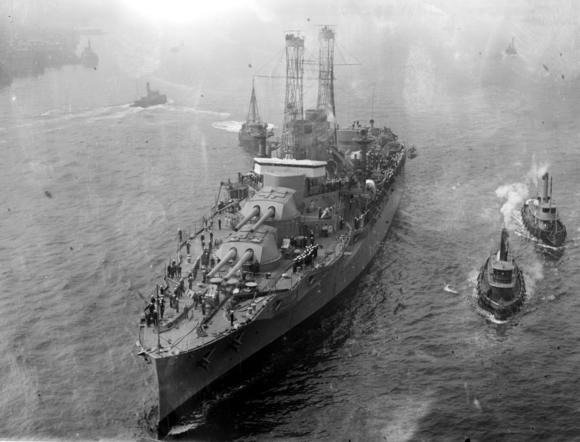 The next “Texas” was a Nuclear Guided Missile Cruiser (CGN). This Texas (CGN-39) was part of the new nuclear navy that launched in the 1960s and 1970s. She was second in the Virginia-class of cruisers. She participated in Operation Eagle Claw, an operation to rescue Iranian hostages. Under Captain William K. Gautier, she served as anti-air commander during the First Persian Gulf War. Due to the cost of maintenance and the fall of the Soviet Union, she was decommissioned about halfway through her expected life in 1993.

The current USS Texas has kept the nuclear tradition. She is second in the Virginia-class of nuclear attack submarines. Commissioned in 2004, the story of the USS Texas (SSN-775) is one shrouded by the depths of the sea. Under Commander Andrew Hertel, she patrols the ocean’s depths, looking for other silent and submerged killers, as well as surface fleets. Previous Post We'll weather the weather: George Observatory's dome gets a makeover
Next Post D-Day, Part II: "We will accept nothing less than full victory"

Two New Movies Added to Wortham Giant Screen Theatre Lineup Starting Monday, January 5Tiny Giants 3DCome on an extraordinary adventure into magical worlds beneath our feet that most of us never see – one where life is lived at an extraordinary intensive pace, where everything we know seems turned on its head. Experience the hidden kingdoms […]

Bust out your planners, calendars, and PDAs (if you are throwback like that), it’s time to mark your calendars for the HMNS events of this week! Travel back in time and test your battle strategy with the War Game Event in our special exhibit Battleship Texas, venture back in time to learn about the Princess […]

D-Day, Part III: “We are coming by day and by night”

Editor’s Note: This is part three of a three-part series exploring the history and significance of D-Day as we approach the 70th anniversary of the battle. Click here to read part one and here for part two. For information on D-Day: Normandy 1944, the 3D film now showing in the Wortham Giant Screen Theatre, please visit us online.     Less […]