Royalty and cracking codes and castaways, oh my! It might sound like a plot summary of a new hit novel, but it’s actually a few of the highlights that our online followers liked and shared this week. From a fancy dinner with Prince Charles to edible insects to the difference between Dimetrodons and Uma Thurman, it was just another week in social media land for the Houston Museum of Natural Science.

It was an important week for NASA as Apollo 11 celebrated its 44th Anniversary of making the U.S. the first country to explore the Moon. Not only did they celebrate winning the Space Race, but they also helped build up a little boy’s dream of someday going to Mars. A 7-year-old boy named Dexter wrote NASA a heartfelt letter expressing his desire to go to Mars. NASA didn’t just answer him; they also sent him a ton of “cool space swag” as well as pictures of the Red Planet and the Curiosity Rover — once again proving that the United States has the best space program in the world!

In other news, Tom Hanks may not have been the only famous castaway. Several detailed aerial photos show a remote island that Amelia Earhart may have survived on for some time as a castaway. These photos didn’t show any volleyballs with faces hanging around, but there was still enough evidence to show that the famous flyer may have lived in island isolation for a short while.

Many social media followers of the Museum enjoyed a post showing just how delicious and nutritious crickets can be. In case you don’t follow us on Instagram, you too can view this young lady enjoy her crunchy cricket snack.

Kate Middleton’s baby bump may have been drawing most of the news recently, but Houstonians should be paying particular attention to another British Royal: the Prince himself, as Prince Charles recently hosted a black-tie-dinner for a handful Museum patrons. The focus of this soiree was to discuss a partnership between the museum and the Hereford Cathedral, which currently houses one of the four 1217 Magna Cartas. The patrons were lucky enough to view the Magna Carta and the King’s Writ as well as enjoy a lovely dinner with the charming Prince. 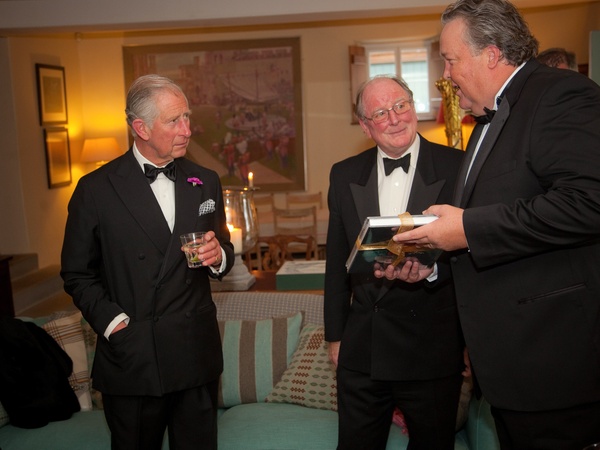 Pushing even further back in history to the age of the dinosaurs, Dr. Bob Bakker blogged about some fabulous Dimetrodons and some of their interesting anatomy. He even uses the beautiful Uma Thurman to further his explanation for a great read about one of our in-house exhibits. Once you read up on the Dimetrodon, make sure you come and enjoy it in person in our new paleo hall, curated by the wonderful Dr. Bakker himself. Although Dimetrodons have armored chests, they don’t look quite like this illustration by Bakker

These were just a few of the many stories that our social media followers enjoyed this week. If you missed any of it, make sure that you follow the Houston Museum of Natural Science on all of our social media channels. We are posting fabulous new information every day — and sharing yours, too!

Error: Unable to create directory wp-content/uploads/2020/08. Is its parent directory writable by the server?
Authored By Meagan May

Meagan is a Marketing Intern and is new to HMNS this summer, but she is no less excited about all of the new exhibits here at the Museum. Her responsibilities include assisting anyone and everyone in the Marketing department. Her summer will include helping with everything from public relations to advertising.

The Top 8 Instagram Spots At HMNS This Holiday Season

It is that time of year where your Instagram feed is #merryandbright. From dogs in Santa hats to beautiful Christmas cookies (seriously when did all my friends become pastry chefs??) to adorable kids crying on Santa’s lap, it seems like everyone is having a holly jolly Christmas.  Do you feel like your […]

Have you seen a numbered butterfly in the Cockrell Butterfly Center today? We’re doing a longevity study to see how long the butterflies in our center are living. If you see a butterfly with a number on it, snap a picture and post it on Instagram with the tag #CBCStudy so that we can see it! […]

Whether or not you’re taking a Texans cheerleader, have a great prom in three easy steps

This Saturday, HMNS is hosting the prom for Crosby High School — and one student is in for an especially memorable night. Most high school football players dream big and take a cheerleader to their prom (some take it uber-seriously and hold prom drafts…), but one local teen has taken prom-posals to the next level. Mike […]

C’mon, get snap happy! Grab your camera (any camera) and Pixel Party with us on Sunday

Oh yes, photographers, it’s that time once again. Time to dust off ye olde DSLR, point-and-shoot, or even that fingerprint-smudged smartphone — and pony up to a photo party at your favorite science museum after hours. In case you haven’t heard by now, our Pixel Party is the next generation of photography soirees from HMNS, where […]

Because Instagram is everything: A self(ie) guided tour of HMNS

I’m sure you, like many people who visit HMNS, are a selfie connoisseur. But sometimes it can be difficult to come up with new concepts. I mean, your Instagram followers need variety. Who wants to see the same old pic over and over again on their feed? Sure, you take them in front of different […]