And now, back to our Priscilla. The American mastodon starred in the opening chapters of American science. Thomas Jefferson got some mastodon bones from Kentucky and put them on display in the White House in the 1790s. 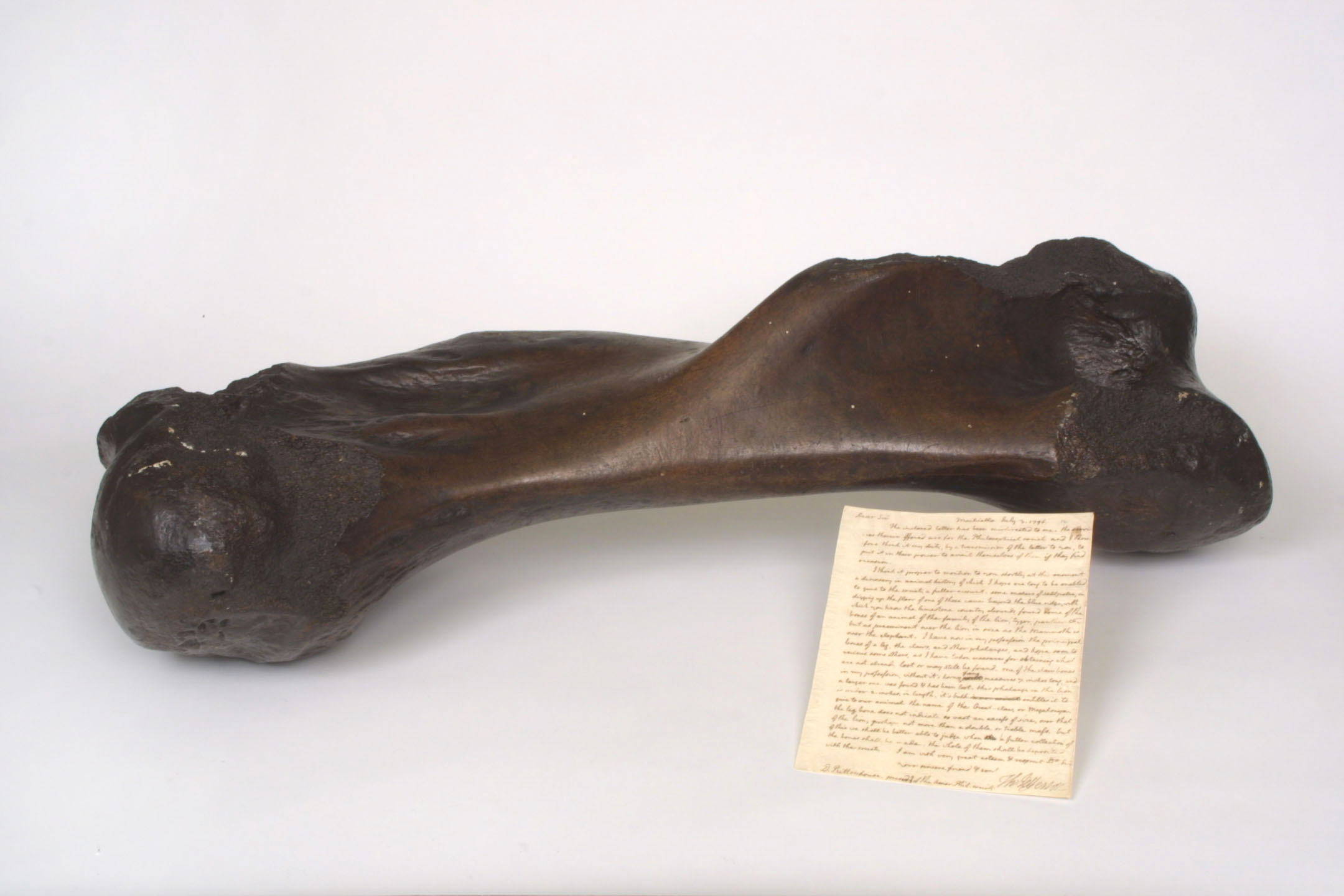 Jefferson was sure that wild mastodons still roamed the unexplored land west of the Mississippi, so he instructed explorers Lewis and Clark to find them. By 1860, dozens of skeletons adorned the halls of museums in North America.

Despite their early fame, American mastodons were overshadowed by mammoths. The average bull Columbian mammoth is noticeably taller. The big fossil halls in New York City, Denver and Los Angeles exhibit both, and there’s no doubt who is the heavyweight.

However, during the Ice Age in Florida, Nature produced some extremes. Priscilla was an old, old bull. He had arthritis in his lower back, and some stiffness in the shoulders. But he wasn’t crippled by any means — despite his great age, he shows healthy leg joints. Elephant bulls today continue growing throughout their lives, if their diet is healthy. Priscilla must have chosen his food well over 50 or 60 years. He grew an extraordinarily wide pelvis and set of ribs — he’s well over six feet, side to side, across the hips. His leg bone shafts match the length in most mammoths, but Priscilla’s legs are far thicker and stronger.

Priscilla was buff. We know that because fossil leg bones show the size and strength of muscles during life. Where powerful muscles attached to the bone, the surface is roughened and ridged. Priscilla’s limbs are outstanding in the development of muscle-attachment marks. So he was not only unbelievably wide, he was Schwartzeneggerian in muscularity. Priscilla is especially massive in the forequarters and the low shoulders make him look like a proboscidean fullback, ready to make a first down in a short yardage situation. The gigantic power in the elbow joint means he could thrust forward with the acceleration of a out-sized rhino. Once he decided to charge, few objects — plants or animals — could stand in his way. If he wanted a path through the woods, he just smashed the trees down.

Priscilla was buried in a Florida stream about 13,000 years ago, a time when human hunters were skulking through the continent. Did Priscilla meet a human? No spear point was found with him and his bones show no evidence of being cut by stone knives after death. Spear points and butcher-cuts document human hunting of mammoth at many sites across the continent. But only a few mastodon skeletons carry the CSI evidence of human attack.

What do we know about Priscilla’s social life? Was he solitary? There are hints that mammoths traveled in herds led by wise old matriarchs, just as modern day elephants do. Cave paintings in Europe show many mammoths together. In North America, several mammoth digs came up with multiple specimens, including moms and calves — maybe the result of a herd dying together. The Waco Mammoth museum displays such a site.

More evidence for matriarchal mammoths comes from where male mammoths are buried. At Hot Springs Mammoth trap in South Dakota, nearly 50 Columbian mammoths sank into loose sand and died over a long span of time. All were male, mostly young adults.

In the modern elephant herd structure, matriarchs drive the males away after the boys go through puberty. Then the young fellows live alone or in bachelor groups. And like bachelors of many species, the male elephants are inquisitive, aggressive and do really stupid things. Like plunge into soft sand without thinking.

Mastodons seem to be way different. Multiple skeletons are rarely piled up in single sites. Bachelor groups are unknown. Most mastodon sites contain just a single skeleton. And so, perhaps we should envision Priscilla as being unsociable, like the giant forest-living rhinos today in Asia and Africa. With a hair-trigger temper and distrust of everyone, the mastodon bull might well have been just too frightening for human hunters to pursue.

I imagine being an Ice Age hunter standing at the edge of a Florida forest. I can hear deep tummy rumbles and coarse trumpeting 200 yards in. I can see birch trees flattened. Tree trunks a yard wide splintered.

“Are we going in?” My companion asks.

Previous Post As big as it gets: Celebrate a super(moon) Cinco de Mayo at the George Observatory
Next Post Because we love your mom, too: Save 10% when you shop the HMNS Museum Store for Mother's Day